[ANALYSIS] Is the Philippine economy in the pink again? Not exactly 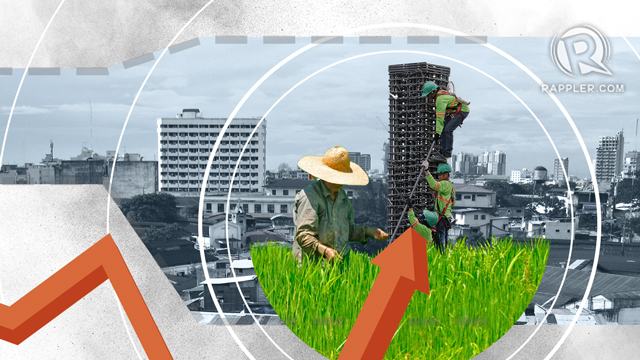 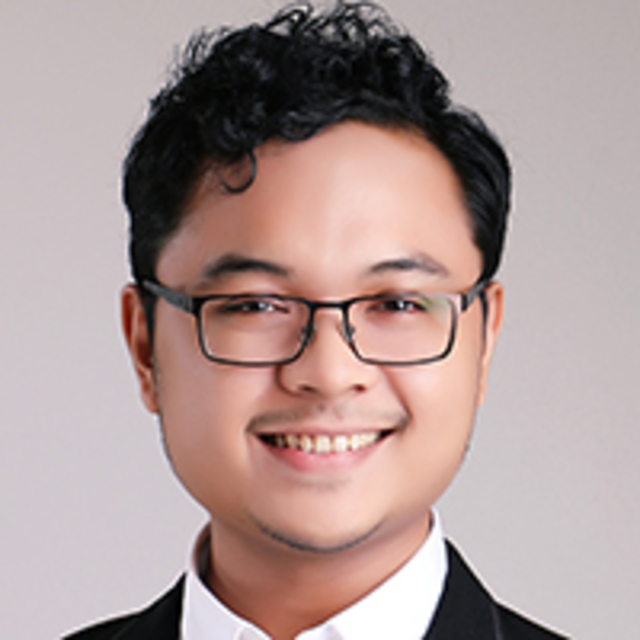 You will recall that economic growth in the second quarter of 2019, as measured by gross domestic product or GDP, clocked in at a dismal 5.5%.

That was the lowest in more than 4 years, and also short of the 6-7% target of President Rodrigo Duterte’s economic team. (READ: Dismal growth: Why is the PH economy losing its momentum?)

On November 7, though, we learned that growth surprisingly picked up again. At 6.2%, GDP growth in fact hit the government’s target for the first time in nearly 2 years (Figure 1).

Sure, we still need 6.7% growth in the last quarter for growth to reach at least 6% for the entire of 2019. But growth in the third quarter is as impressive as it is surprising.

Why the uptick? Does this mean the Philippine economy is in the pink again? Well, not exactly. 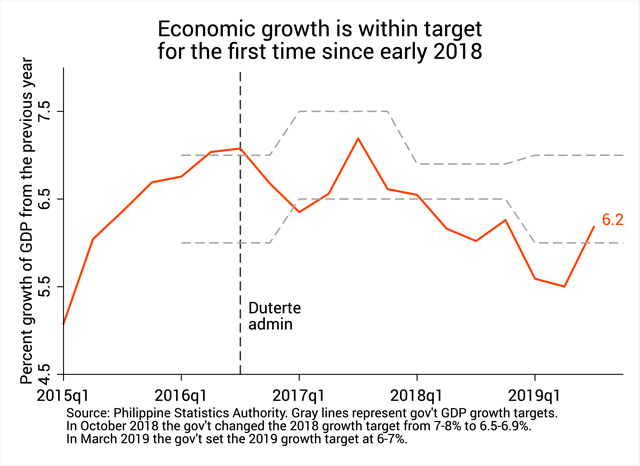 If we break down our economy into its 3 main sectors, you will see that growth in agriculture and industry somewhat rebounded last quarter, while growth in services slackened but only by a tiny bit (Figure 2).

For the 6.2% growth, agriculture contributed 0.23 percentage point. Although still small, this is nearly 4 times agriculture’s contribution in the previous quarter.

This growth is surprising given the many problems besetting agriculture today, including plummeting rice prices, a 60% drop in sugarcane production, and the spread of African swine fever (ASF) which has plagued the country’s pig industry.

The saving grace was a sizable 24.1% increase in corn production last quarter and a 17.3% growth in forestry. 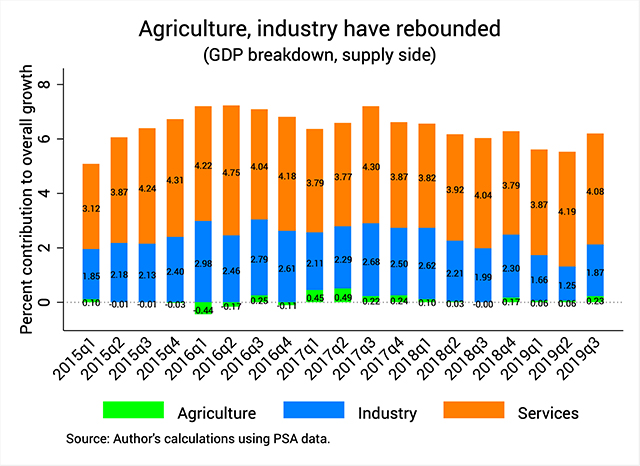 Industry also contributed more to overall growth last quarter, mainly on account of the recovery of public construction, which grew by 11% (Figure 3). This is a far cry from public construction’s 27% contraction in the previous quarter. 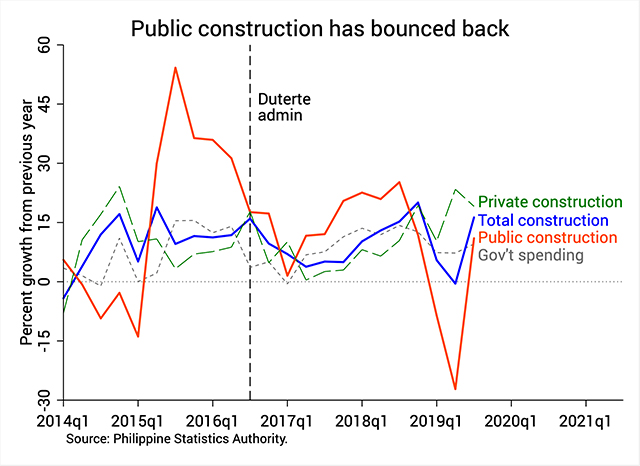 It’s convenient to take this as an indication that the government’s “carefully crafted and bold expenditure catch-up plan” – as the economic managers said in May – is bearing fruit.

But remember that bold spending is supposed to be the norm. After all, the economic team promised us nothing less than a “golden age” of infrastructure through Build, Build, Build.

Yet, construction dipped early this year because of the delayed passage of the 2019 budget, which in turn stalled many key infrastructure projects. (READ: How pro-Duterte lawmakers hurt economic growth)

This is why the economic managers have been imploring Congress to avoid another such delay in 2020, warning of the “extremely detrimental” effects of yet another re-enacted budget.

In addition, Socioeconomic Planning Secretary Ernesto Pernia recently admitted that, owing to various engineering and financing challenges, the government won’t be able to push for all 75 flagship projects under Build, Build, Build. They will instead shelve unfeasible projects and replace them with smaller, more doable ones.

To sustain public construction growth, the government will also need to iron out long-standing bottlenecks in infrastructure spending – mainly the lack of technical and absorptive capacity in key implementing agencies, as well as thorny right of way issues.

Despite the growth uptick, not all is well in the Philippine economy.

In the second quarter we were shocked to see that private investments shrank for the first time in 7 years. Unfortunately, that contraction recurred in the third quarter, albeit to a lesser extent (see the blue bars in Figure 4).

Again this has to do with a decline in the production of “durable equipment” like cars, telecom equipment, or mining and construction machinery – products that fuel future growth. 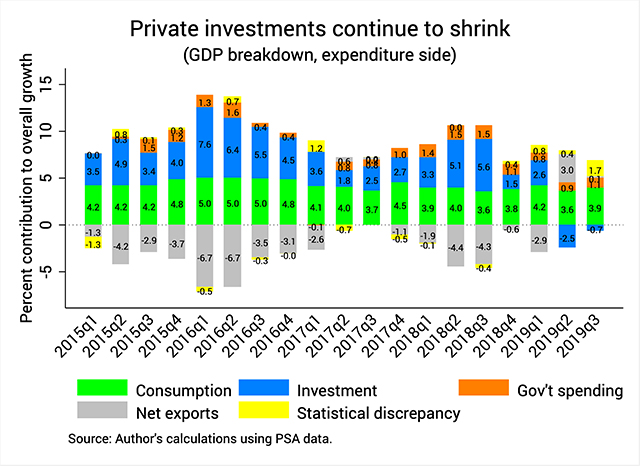 At the same time, exports and imports have stagnated (Figure 5). They neither shrank nor grew appreciably last quarter, and as a result net exports – exports less imports – barely contributed anything to overall growth (Figure 4). 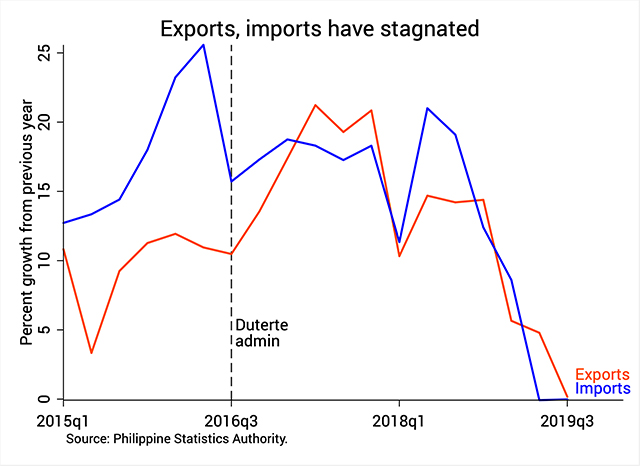 Economists in both the private and public sectors put the blame on the ongoing US-China trade war.

In October, the International Monetary Fund (IMF) warned that this trade war will likely drag down global economic growth to its lowest level since the 2008-2009 global financial crisis. In the same analysis, the IMF downgraded Philippine growth in 2019 from 6.5% to 5.7%.

There are signs, though, that the trade war might soon be easing. US and Chinese officials are reportedly in talks to roll back some of the tariffs they’ve been (needlessly) imposing on each other since last year.

Alas, the Philippines is but a small actor in the stage that is international trade, and Duterte’s economic team can only do so much to counteract the global slowdown of economic growth.

Why this reversal? What explains the contraction of private investments in the past two quarters? How can we reverse this?

Finally, note from Figure 4 a sizable chunk of growth was explained by a yellow bar that denotes “statistical discrepancy.” Simply put, this means there’s a gap between how GDP was measured from the supply side (Figure 2) and from the expenditure side (Figure 4).

Why is this statistical discrepancy suddenly so large? I hope statisticians out there can shed light on this puzzling data point soon.

Not all is well

As you can imagine, the Palace jumped on the recent growth figures and was quick to proclaim the economy is back in the pink of health.

Palace Spokesperson Salvador Panelo even went on to say, “This development illustrates [the Duterte administration’s] competence in other fields, such as protecting the health of the nation’s economy notwithstanding inevitable setbacks it has encountered in the past.”

First, let’s not forget the previous economic policy blunders of the administration that belie such glowing “competence.” (READ: Duterte a ‘competent’ economic manager? Not so fast)

Second, one quarter of within-target growth is not a trend. Only time will tell if we can maintain such growth.

News of higher economic growth is always welcome. But let’s not delude ourselves into thinking all is already well. – Rappler.com