Dec 4, 2019 10:00 AM PHT
Marites Dañguilan Vitug
Facebook Twitter Copy URL
Copied
The Philippines has been transformed into a wilderness soaked in blood 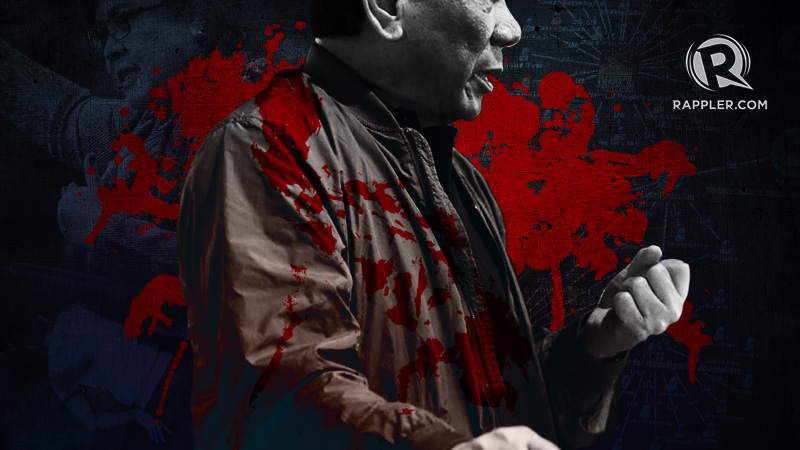 In the first 4 days Rodrigo Duterte was president in 2016, at least 45 suspected drug users and traffickers were killed. That was about 11 dead bodies a day: a trail of blood that was to become Duterte’s trademark signal in governing the country.

In the thick of the war on drugs – on his 8th month in office – Duterte sent Senator Leila de Lima, his fiercest critic, to jail on trumped-up charges that she trafficked in drugs. He used state agencies led by the Department of Justice (DOJ) to make De Lima his Exhibit A. The message was loud and clear: anyone who earned his ire would face the same fate.

Today, three-and-a-half years later, Duterte has transformed our country into a wilderness soaked in blood, with more than 5,000 dead. The police claim all of them were killed in legitimate operations because they were armed and fought back (nanlaban).

Not only that. Outside of these “official” deaths, there are at least 1,000 drug-related deaths.

A Social Weather Stations survey shows that doubts on killings by the police persist. So far, data that show the Philippine National Police (PNP) followed due process in going after drug suspects has not been made accessible to the public.

Fear as source of power

The erosion of the rule of law which further weakens the Philippines’ fragile democracy is a major theme that underpins the 3-year presidency of Duterte: Fear has replaced the rule of law and has become the source of Duterte’s power. The deadly war on drugs is just one of the 3 pillars of his strongman rule.

The others are rule by fear through threats, intimidation and using the law as weapon against those he considers his enemies; and non-recognition of international public law.

Let us walk through each of these.

Initially, the President gave himself a 6-month deadline to solve the drug problem. But he later said he didn’t realize the extent of drug use and needed until the last year of his 6-year term to address the social menace.

The point of Duterte’s war, it soon surfaced, was not to eradicate drug use but to sow fear in the public, a means of control. He has dismissed evidence-based studies and other countries’ experiences (Thailand and Colombia, for example ) that show how violent drug wars have failed to address the problem.

Meantime, cases questioning the constitutionality of the drug war are pending in the Supreme Court which is dominated by pro-Duterte justices.

The war on drugs has unleashed a culture of violence and impunity. Lawyers are under attack as well. As of November 2019, 44 have been killed, including judges and prosecutors

This is alarming. Data from the National Union of Peoples’ Lawyers (NUPL), which monitors killings in their profession, show that the numbers have reached a high under Duterte. Compare this to 44 killed during the 9 years of President Gloria Arroyo and 23 during President Benigno Aquino III’s 6 years, according to the NUPL committee on protection and welfare of lawyers.

Early this year, an international legal group that visited the Philippines and did a probe said that “…patterns suggest a connection between the killings and the actions of the PNP and AFP.”

In the past, Duterte urged the police to go after human rights activists, including lawyers, uttering statements such as this: “If they are obstructing justice, you shoot them.”

Local officials rank next to lawyers. So far, 13 mayors, and 8 vice mayors have been killed under Duterte Some of the killings arose out of “narcolists” which Duterte has made public: these are names of politicians who are supposedly engaged in the drug business or abet it.

One pattern has been clear in Duterte’s rule: the use of lists such as “narcolists,” and more recently, a “matrix” of enemies planning to oust him. In effect, these are watch lists that signal to the public that the government is watching, a tactic that is effective in spreading fear.

The first “narcolist” was released in 2016 followed by the next issued before the midterm elections in May 2019.

With all these lists, Duterte does not need to declare martial law, which was what President Marcos did in 1972. His is a different playbook.

Duterte has threatened media organizations that do their jobs without fear. For the first time in 3 decades, the press is at the receiving end of Duterte’s strong-arm tactics. All these stem from the President’s belief that freedom of the press is a privilege and not a right, forgetting the Constitution’s bill of rights.

He has gone after 3 media organizations – the Philippine Daily Inquirer, ABS-CBN, and Rappler – in various ways using state agencies such as the Bureau of Internal Revenue (BIR), DOJ, and the Office of the Solicitor General.

The BIR has filed tax evasion cases against Rappler, the Prietos – who own the Inquirer, but over their other business, Dunkin Donuts – and, most recently, Felipe Gozon of GMA 7 and Paolo Prieto over the now-defunct Inq7.

Rappler faces a cyber libel case and a case questioning its foreign investments.

ABS-CBN has been in hot water for supposedly not airing Duterte’s ads during the election campaign. The President said he will urge Congress not to renew the TV station’s franchise which expires in March 2020. ABS-CBN has kept quiet on the issue as the threat hangs over the giant network.

No to international law

The third pillar of Duterte’s strongman rule is his disregard of international law, weakening the country’s compliance with international norms. Two examples stand out.

In March 2018, Duterte withdrew from the International Criminal Court (ICC) and this took effect a year later, after the Philippines notified the United Nations. The Philippines is the second country to leave the ICC, sharing the global spotlight with Burundi, the first nation to do so.

The ICC has started its “preliminary examination” of complaints against extrajudicial killings that resulted from Duterte’s drug war, which can be considered a “crime against humanity.” The examination will continue even after the country’s withdrawal. After this first phase, the ICC can start a full-blown investigation followed by a trial.

It is also possible that the “preliminary examination” may not lead to a probe. But it is hoped that this puts pressure on Duterte to slow down. So far, there is no indication that he has changed his mind about his approach to illicit drug use.

Will the Philippines rejoin the ICC? The decision rests with the Supreme Court where minority senators and civil society groups are questioning the country’s unilateral withdrawal. It is important that the legal question of the Senate’s concurrence in the withdrawal of the executive from the ICC be resolved. Otherwise, allowing the President to do this, on his own, gives him unbridled power.

The other case has to do with Duterte’s disregard of the legal victory of the Philippines in its maritime dispute versus China, impairing sovereign rights. Duterte has shelved the country’s overwhelming victory before an international tribunal to appease China. He has not used this landmark decision as leverage in dealing with the regional power.

Yet, despite all this, the midterm elections in May gave the President a boost. His allies dominate the House of Representatives and the Senate, and the Supreme Court is packed with his appointees. These are the very same institutions that will ensure that the crumbling of the rule of law under Duterte will continue till he steps down in 2022. – Rappler.com