[OPINION] Asia’s Winners and Losers in 2019: From K-Pop sensation BTS to the beleaguered people of Hong Kong 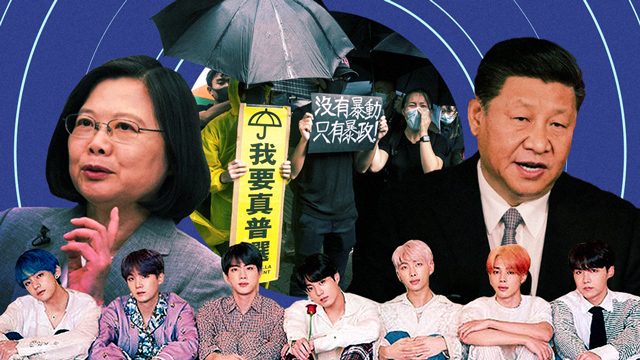 Facebook Twitter Copy URL
Copied
So, who was up and who was down in the Indo-Pacific region in 2019? Here’s our assessment. In years past, the Philippines has been no stranger in our annual rankings of who had it good and who had it bad as we put the spotlight on Philippine President Rodrigo Duterte in 2015 and on the growing challenge to press freedom in 2018.

As 2020 begins, we take one last look at the year that was. Whether in Manila or New York, consumers and investors took note as President Trump continued his disruptive approach to diplomacy and pushed back on China trade practices in 2019.

At year’s end, the on-again-off-again US-China trade war had sent US equity markets on a volatile ride to record levels. If on nothing else, Trump has united partisan Washington on the need to rebalance the US-China economic relationship.  How that relationship evolves in the year ahead will surely impact all Southeast Asia as well as Main Street America and the 2020 US presidential elections.

So, who was up and who was down in the Indo-Pacific region in 2019? Here’s our assessment:

Amidst slowing economies and political divisions, good news was hard to find in much of Asia in 2019. A clear exception was the K-pop sensation known as BTS that has also made its presence felt across the USA. The 7-member Korean boy band was firmly established as a dominant social media presence and worldwide phenomenon in 2019.

BTS’ wildly successful, extended “Love Yourself World Tour” sold-out stadiums in Asia, and across the Americas, Europe and the Middle East, including the Rose Bowl in Pasadena and London’s Wembley Stadium. Music awards and commercial success accelerated, with accolades from MTV, Billboard and the American Music Awards. In 2019, BTS also became the first group since the Beatles to earn 3 No. 1 albums in less than a year, according to Billboard.

With the group contributing more than $4.65 billion to South Korea’s GDP, according to the Hollywood Reporter, little wonder BTS earned a Time cover story and a place on the magazine’s list of  the 100 most influential people for 2019. Trump might well have met rival boy group EXO on his own trip to Seoul in 2019, but it is BTS that wins our Best Year in Asia 2019.

From Indonesia’s President Joko “Jokowi” Widodo, easily reelected in April 2019, to Japan’s Prime Minister Abe Shinzo, who became Japan’s longest-serving prime minister in November, Asia has its share of leaders who found 2019 to be very much a good year.

No one’s fortunes changed as much for the better though than Taiwan’s President Tsai Ing-Wen. At one point, her prospects for re-election seemed slim, particularly after her Democratic Progressive Party suffered a disastrous defeat in the 2018 local elections.

But as the January 11 general election approaches, Tsai is riding high in the polls, thanks in no small part to the unrest in Hong Kong and to a resilient Taiwan economy that continues to roar along, benefiting from growing foreign direct investment and the “reshoring” of Taiwan businesses, amidst US-China trade tensions. The Taiwan stock exchange is now up some 25% since the start of 2019. Tsai also won international attention when Taiwan approved same-sex marriage in May 2019, making history in Asia.

2019 was a mixed year for the two most powerful political leaders in the world.

By year end, Trump had become only the third US president to be impeached and worries reemerged about whether North Korea’s mercurial Kim Jong Un might try to crash Trump’s Indo-Pacific strategy. Yet, a strong economy continues to augur well for Trump in the 2020 presidential elections.

On this side of the Pacific, China’s President Xi Jinping in 2019 solidified his role as the strongest Chinese leader in decades.  This though hasn’t prevented growing pushback over China’s treatment of the Uighurs  and other predominantly Muslim minorities, accusations of debt diplomacy over Xi’s signature Belt and Road Initiative, increasing blowback over Chinese economic nationalism highlighted by a furioius response to a  pro-Hong Kong Tweet by a NBA general manager, and most critically, a slowing Chinese economy.

An end-of-year, “Phase One” US-China trade deal has at least brought a pause to the ongoing US-China trade war, offering up benefits to US and Chinese consumers worried over tariffs, and perhaps set the stage for a come-back and better year in 2020 by both Trump and Xi.

It’s just not working anymore. Since unveiling his $100-billion Vision Fund in 2016, Japan’s billionaire investor and Softbank founder Masayoshi Son has dazzled, becoming one of the world’s most active tech investors.

Investments in unicorns and would-be unicorns – startups valued at $1 billion or more – would, he and his investors envisioned, replicate the success Son had achieved with a storied early investment in Alibaba. There, a $20 million investment in Alibaba turned into stock worth more than $120 billion.

But in a bad year for Son, questions have grown about murky governance, elusive profits and the valuation of investments in companies ranging from ride-sharing company Uber to co-working space provider WeWork. In one month, WeWork cut its valuation from $47 billion to $10 billion, and in October, SoftBank stepped in, forcing out WeWork Chairman Adam Neumann with a $1.7 billion payout, and reducing the company’s valuation to $5 billion.

What’s next for Son and Softbank? Seems a period of reflection and restraint is due, with Fortune reporting that he has told tech startups that “knowing your limitations will help unleash limitless possibilities.”

WORST YEAR: The People of Hong Kong – 6 months of turmoil and the worst may be yet to come

The world has been transfixed this year by televised battles between Hong Kong protesters and police in tear-gas filled streets. What’s at stake? The future of the more than 7 million people who call this special administrative region of China home.

Ongoing protests were sparked by a now withdrawn bill that would have allowed people arrested in Hong Kong to be sent to Communist China.

With countries issuing travel warnings for Hong Kong, visitors’ numbers are plummeting. In August 2019, the Department of Foreign Affairs (DFA) of the Philippines advised Filipino travelers who have no urgent business in Hong Kong to avoid Hong Kong International Airport (HKIA) as a destination or transit airport. The Singapore Ministry of Foreign Affairs also that month issued a travel advisory to its citizens to defer non-essential travel to Hong Kong.

Schools have been closed and universities under siege. Hong Kong is now in a recession, its first in a decade. And while Trump has signed into law the Hong Kong Human Rights and Democracy Act of 2019, the worst may be yet to come as the promise of “One Country Two Systems” fades and Beijing increasingly intervenes in this self-proclaimed “Asia’s World City.”

Sadly, whether pro-China, anti-China or somewhere in between, the Hong Kong people are our biggest losers for 2019. – Rappler.com

Jose B. Collazo, is a Southeast Asia analyst and project consultant at RiverPeak Group.  Follow them on Twitter at @curtisschin and @josebcollazo.