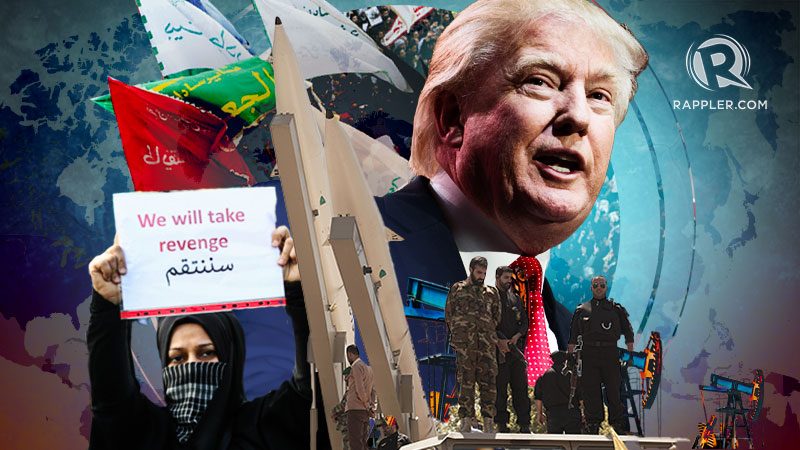 Facebook Twitter Copy URL
Copied
What is driving Iran to stand up to the world's most formidable military and economic powerhouse?

Editor’s Note: Corrections have been made in the dates on the ouster of Prime Minister Mohammad Mossadeq, the return of Ayatollah Khomeini to Iran, and the Shah’s departure from Iran.

The assassination by the U.S. of Iran’s charismatic military figure, Qassem Soleimani, as the world entered the new year, upped the ante between these two protagonists. Since then, the world has been left to await with bated breath if the dire prognostications being peddled by analysts would come to pass.

The world has seen the US project its might in all areas of human endeavors; the same cannot be said of Iran.

What is driving Iran to stand up to the world’s most formidable military and economic powerhouse?

Shirin Ebadi, the first female Muslim Nobel Peace laureate, boldly declared that she would give her support to the theocratic regime in Iran in the event an outside force would intervene and attempt to take control of her country. Coming from someone who gained recognition for her political activism against the present regime in Iran, this patriotic declaration assumed great significance.

The events that led to the toppling of the Shah in 1979, and the subsequent takeover of the US embassy by Iranian university students, made the Iranians feel a sense of empowerment, and rallied them around the country to support the Ayatollah regime. The rural population, in particular, that benefited from a land reform program that broke the hold of the landowning class over them, clearly gave their support to the new regime.

These recent developments strengthened the sense of nationhood that evolved over some 2,500 years in this unique country. Situated along the key trading routes, Iran (Persia, then) also attracted the great army of Alexander the Great, the Roman legions, the Mongol invaders, and the Islamic adherents on their way to Central and South Asia. In the 19th century, Iran deftly played off Great Britain, Russia, and the Ottoman Empire in what has come to be known as the “Great Game.”

Throughout its long history, the Iranians have preserved their identity and have managed to choose their system of governance.

The discovery and development of the highly productive oil fields in Abadan, and the setting up of the largest refinery at the time, brought revenues to the Persian treasury and to the concessionaire, Anglo-Persian Oil Company. The latter was controlled by the British Government after buying 51% of its shares.

The very success of the Anglo-Persian Oil Company (APOC) gave rise to disagreements over the sharing of profits when APOC ventured into the acquisition of subsidiaries in Brunei, Kuwait, Bahrain, and acquired substantial shares in a valuable concession in what is now Iraq. Things would come to a head when Iran nationalized its oil in 1951.

In 1953, the democratically elected Prime Minister, Mohammad Mossadeq, was ousted in a CIA-hatched coup. Mohammed Reza Pahlavi was installed as the new ruler who would squander Iran’s oil wealth on military hardware and grandiose projects in pursuit of his ambition to make his country a developed power in the world.

On January 16, 1979 the Shah quietly left Iran for Egypt, accompanied only by his family and a few close servants, never to return to his country.

In February 1979, Ayatollah Khomeini triumphantly returned from exile in Paris to assume the nation’s leadership.

The imposition of crippling sanctions against the regime in Iran has not brought down the country to its knees. On the contrary, signs of breakthroughs in critical areas could be observed not only in the capital of Teheran but also in the provincial areas. The system that moves people and goods is showing remarkable improvements. The road network is expansive and well-maintained. The railways efficiently connect major cities and centers of production. The air services, though, manifest the effects of the sanctions in the aging fleets of commercial planes.

Dramatic gains have been made in women’s literacy, from 24% at the time of the revolution to 85% in the first decade of the new century. Iran does not suffer from any shortage of the basic food commodities. The pharmaceutical industry makes available to the public medicines at prices ordinary people can afford.

Iran’s role in the region

The establishment of the state of Israel ushered in the period of conflict and instability that is still influencing events in the region. Today, the political-military landscape has undergone a radical make-over. Once frontline states, such as Egypt and Jordan, have entered into their particular arrangements with Israel. The second-tier opposition, Libya and Iraq, have been mired in their own problems of survival. Only Syria has maintained its open hostility against Israel.

The issue of territory, particularly, Jerusalem, has always been the lightning rod that has attracted other players, such as Iran. On this issue, Iran has adroitly inserted itself into the main opposition through the support given to Hamas in the Gaza Strip, to the Hezbollah in Lebanon, and to the tottering regime in Damascus. In Iraq, the Shia militias give Iran a strategic opportunity to influence events in the country, thus expanding the system of alliances with state and local militias. Iran has become Israel’s most feared adversary.

The introduction of nuclear armament in a very volatile region such as the Middle East is the most dreaded scenario of our time. While Israel is widely believed to be possessing several nuclear-tipped missiles, its show of restraint is seen as a show of its high sense of responsibility. Iran’s case is different. While denying any ambition to develop the capability to produce a nuclear arsenal, Iran is showing intransigence by resuming its uranium-enrichment program, despite urgent diplomatic initiatives from France, Germany, Russia and China for Iran to adhere to the 2015 agreement.

How the United States and Israel view Iran’s uranium-enrichment program can very well determine if escalation of tensions can lead to military intervention.

For ignoring the strong international pressure to halt its uranium-enrichment program, Iran was subjected to severe economic sanctions starting the early 2000s. An oil embargo was followed by the blacklisting of banks and individuals, making business with Iran a risky proposition. By the second decade of the century, the crippling effects of the sanctions were beginning to be felt by the general population. Raw materials needed by local industries from outside sources were becoming difficult to procure. Goods were disappearing from the shelves. In 2015, Iran reached an agreement  with the US, France, Germany, Russia, and China, in effect putting on hold its aggressive uranium-enrichment program.

This is highly significant, given the intransigence of Iran in previous rounds of negotiation. Iran may be reaching its breaking point as evidenced by growing restiveness among the younger population. In the light of the bleak economic outlook, what now bears watching are the traders in the bazaar who, traditionally, have served as political weather vanes.

The assassination of Gen. Soleimani may have given the present regime the big diversion it needs to channel the emotions of the Iranian people into another frenzied mobilization against the US.

The evolving alliance in Asia

The geopolitical situation in West and Central Asia bears watching. Russia, China, Iran, Kazakhstan, and India are increasing their cooperation in strategic areas under the Shanghai Pact. New pipelines will carry increasing trade in energy resources, in the process lessening dependency on the shipborne trade that passes through the vulnerable Strait of Hormuz in the Gulf.

Iran is central to this evolving new order as it straddles both land and maritime routes.

An armed confrontation in a conventional way involving the Iranian military and its proxies against the US and its allies may not materialize as yet, but it may set the stage for deeper cooperation and involvement in the immediate future with the Shanghai Pact signatories. The Asian Century may not be far off. – Rappler.com