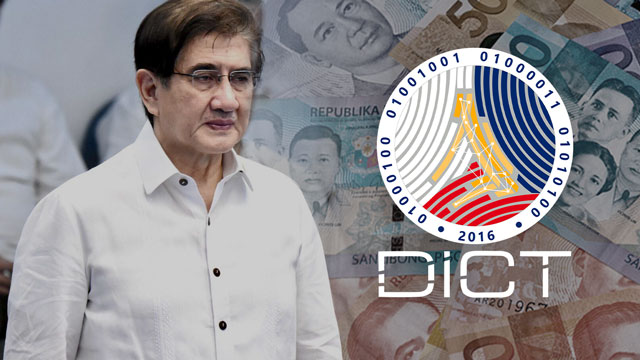 MANILA, Philippines – The Department of Information and Communications Technology (DICT) admitted to using P300 million for surveillance and other cybersecurity-related matters, after a memo from state auditors said its use of confidential funds led to the agency’s underperformance.

In a statement on Wednesday, February 5, DICT said the P300 million was disbursed in 3 tranches and was likewise liquidated with the Commission of Audit (COA).

“Under existing laws, rules, and regulations, the Confidential Expense item is for lawful monitoring and surveillance of systems and networks to support the DICT’s functions, which include cybersecurity, the formulation and effective implementation of the National Cybersecurity Plan, and international cooperation on intelligence on cybersecurity matters,” DICT said.

DICT added that COA did not disallow the disbursements and its recommendations were merely procedural and pertained mainly to the timeframes for disbursement.

“Simply put, the COA’s main concern is for the department to be more efficient in processing the relevant documents – all of which the department has addressed.”

It further said that the funds were legitimately used for cybersecurity and national security.

“The information systems in our country [need] continuous monitoring so that both domestic and foreign cyber threats and cyberattacks can be identified, addressed, and promptly neutralized to protect the safety and security of our nation. These cybersecurity threat monitoring activities have a direct impact on national security,” DICT said.

“As a member of the National Security Council, the DICT is mandated to protect the nation’s critical infostructures, its government networks both civilian and military, its small-medium enterprises to large businesses, the corporations and its supply chains, and every Filipino citizen using the internet.”

However, an audit observation memorandum by COA said DICT underspent for projects since the funds allotted for the agency were used up as confidential funds.

To make cash advances from confidential funds, agencies must first secure a notice of cash allocation from the Department of Budget and Management. Instead, DICT just used its unspent budget intended for other purposes.

Not only did this move by DICT Secretary Gringo Honasan violate rules on confidential funds, it also led auditors to say that DICT was unable to effectively perform its mandate for 2019, especially for cybersecurity.

“All these noted deficiencies adversely affected and are counter-beneficial to the department’s mandate of cybersecurity policy and program coordination,” said the memorandum.

The issue also led to DICT Undersecretary Eliseo Rio Jr quitting his post. Rio said he was excluded from planning for the use of the confidential funds. – Rappler.com