[ANALYSIS] May pera nga ba? Does Duterte have money to fight COVID-19? 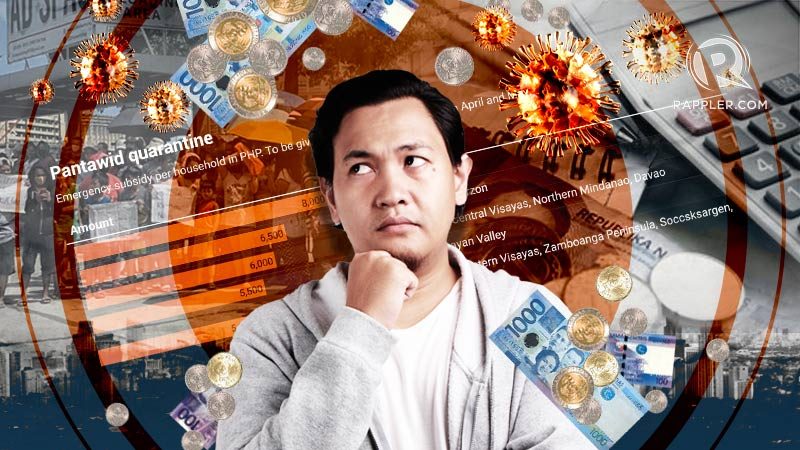 There are already flashes of social unrest.

On Wednesday, April 1, residents from Sitio San Roque, an urban poor community in Quezon City, went out of their houses on rumors that aid was being distributed. Having violated quarantine rules, they were swiftly chased down by the police; 21 were arrested.

In the recently signed Bayanihan to Heal as One Act, President Rodrigo Duterte promised to give 18 million households a monthly “emergency subsidy” of at least P5,000 per household for two months. But government is still preparing the database that will be used to target these households.

It’s not just workers and the poor who need help, but also businesses whose cash flows – and very survival – are in peril. But the Department of Finance (DOF) said aid for firms will “take [a] back seat.”

Economists say government needs as much as P300 billion to put the Philippine economy on life support. Duterte assured the people – in one of his late night addresses – that he has the money for that: “may pera ako”.

But does he really have the money? Where will it come from? And how exactly does he intend to use it?

The good news is that government has lots of possible sources of emergency funds – from taxes to savings and loans.

As for taxes, the DOF admitted tax revenues might drop this year by over P91 billion, what with the Philippine economy put in forced hibernation. Minimal incomes beget minimal taxes. (READ: ‘Freezing’ the PH economy: Can we survive it?)

Even as Dominguez said this, however, he implored taxpayers – at least those able to file and pay their taxes early – to help bankroll the government’s COVID-19 programs.

But the entire point of the government’s response to COVID-19 is to hand out economic aid. The last thing we want is for government to ask money from the people while their incomes and livelihoods disappear before their eyes.

As for savings, the Bayanihan law authorized Duterte to “reprogram, reallocate, and realign” savings from 2020 budget items to help communities and industries affected by COVID-19.

But in Duterte’s first weekly report last Monday, March 30, no such realignment has been done.

Meanwhile, the DOF claims there are P200 billion more that can be tapped from various accounts of the national government and GOCCs (government owned or controlled corporations).

As for loans, the DOF is already in talks with multilateral agencies like the World Bank, Asian Development Bank, and Asian Infrastructure Investment Bank to secure loans amounting to $1 billion-$2 billion.

In April the Treasury also expects to raise P190 billion from its sale of government securities – although demand from investors has been anemic of late.

By far the most significant funding source came from the Bangko Sentral ng Pilipinas (BSP), which purchased government securities worth P300 billion.

You can think of this as a zero-interest bridge loan that the Treasury must repay in 6 months. If spent prudently, this substantial sum could go a long way in our fight against COVID-19.

More worrisome than the sources of funds are the uses of funds.

There’s a lot of confusion right now on exactly how much Duterte plans to spend for his COVID-19 projects.

First, government announced on March 16 a P27.1 billion spending plan. But some observers said this sum was too small and a mere repackaging of existing budget items. Oddly, it was also mostly earmarked for tourism.

Second, Marikina Representative Stella Quimbo drafted a P108 billion “economic rescue plan” which allotted P50 billion for business loans and subsidies, P43 billion for tourism, and P15 billion for displaced workers. But Congress has yet to pass this or some other rescue package.

Third, Duterte’s allies in the House penciled P275 billion in their draft of the Bayanihan law (originally written by the Palace). But when interpellated, the bill’s sponsors couldn’t provide any breakdown for the huge sum they proposed.

Fourth, the Bayanihan law signed by Duterte on March 25 actually didn’t specify a total amount. Duterte later said he’d spend P200 billion, but that’s barely enough for his emergency subsidy which, by itself, will cost somewhere between P180 billion and P288 billion (plus P5.1 billion in administrative costs).

Lots of people on social media demand to see what Duterte has done with the supposed P275-billion COVID-19 budget. But the real amount…we don’t know. There’s no detailed spending plan yet.

In the meantime, more people are getting broke and hungry and desperate by the day.

The Bayanihan law did specify the amount of emergency subsidy people can get (see table below), but government is still drawing up the final list of beneficiaries. It will take weeks to distribute such aid to 18 million households. (A similar lag happened in the distribution of unconditional cash transfers of the 2017 TRAIN law.)

Businesses – especially smaller ones – are also beginning to fold. Delivery trucks are held up at checkpoints, container vans stranded at ports.

There’s also no specific financial assistance earmarked for firms in the Bayanihan law. Congress still needs to craft a separate bill for this purpose, but lawmakers may not convene again until May – by which time many businesses will already have gone bankrupt.

Delays may yet worsen. On April 1 Duterte ordered that all donations to the national government or health department of medicines and medical equipment be directed to one central office: the Office of Civil Defense. But our frontliners need these supplies urgently, and this new regulation could only add another needless layer of bureaucracy in the process.

At least 17 doctors have already died due to the disease, yet Duterte even had to the gall to say they were “lucky” to have died for the country. Quite the opposite: they were unlucky.

If only government had prepared for and responded earlier to the epidemic, many of our frontliners need not have died.

At the end of the day, money is not really the issue here. There should be more than enough sources of emergency funds.

The real problem is that entering the third week since the initial lockdown, Duterte has yet to show any comprehensive, detailed plan to allocate and distribute disaster relief for the tens of millions of Filipinos who need support ASAP.

Worse, Duterte seems to be confusing the real enemy. In a surprise address on April 1, Duterte (presumably triggered by the riot at Sitio San Roque earlier that day) ordered his troops to shoot anyone who violates quarantine rules.

Today we’re enduring two types of crises: one in public health, another in governance. Unsettlingly, I can’t tell which is worse now. – Rappler.com