[REFLECTIONS] We need to think and re-think our theology Facebook Twitter Copy URL
Copied
Today, we are challenged by John in his letter: 'We know love by this, that he laid down his life for us—and we ought to lay down our lives for one another'

It’s a first in world history: an online Holy Week for millions of people, even in Vatican City, due to the coronavirus pandemic. Rappler presents a series of reflections to help you, our reader, enter the spirit of Holy Week even in quarantine. 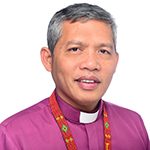 Let me begin by asking the liberating question, why was Jesus killed?

Jesus was the son of a carpenter and an ordinary woman – poor Galilean parents. The whole of Judea was under the oppressive rule of the Roman Empire represented by puppet kings and leaders of the society including the religious rabbis, priests, Sadducees, and Pharisees. Economically, politically and culturally, the Jewish society was in the utmost situation of malady that fueled the people’s longing for a messiah, a savior fulfilled in Jesus.

In John 10:10(b) we know of Jesus’ vision, “I came that they may have life, and have it abundantly.” And His mission statement in Luke 4:18-19, “The Spirit of the Lord is upon me because he has anointed me to bring good news to the poor. He has sent me to proclaim release to the captives and recovery of sight to the blind, to let the oppressed go free, to proclaim the year of the Lord’s favor.” He wanted not just a change but an overhaul of the society.

To achieve this He preached, organized and mobilized people. He did all this by immersion, He lived with the people, as He was the God made flesh and dwelt among His own people (cf.John1:14). He recruited disciples and formed the core group, the apostles.

The most effective weapon of Jesus was miracles as it ignited the curiosity of people to come, witness and listen to his teachings and stories – the parables which not only touched the very egos of the listeners about their mistakes and learn from them but also a revelation of their sufferings and an attack on their oppressive leaders. An example is the parable of the Good Samaritan (Luke 10:25-37). It was in bad taste for the religious leaders, the priests and Levites, and to the Jews who believe that they were the chosen people. But it was the Samaritan, a gentile who gave and exemplified that life is more precious than laws, traditions and even religious practices. Another is when Jesus said, “Give to Cesar what is Cesar’s and to God what is God’s” (Mark 12:17) but Jews were taught by their elders that everything comes from God and belongs to God. Therefore, nothing is of Cesar.

He defied authorities, smashed the influential religion and threatened the status quo. When told to go away in the name of King Herod, Jesus replied, “Go and tell that fox for me, ‘Listen, I am casting out demons and performing cures today and tomorrow…’” (Luke 12:31-32). He cleansed the temple, actually turned it messy, and admonished the church authorities for making it a den of robbers (John 2:12-22). He comforted the sick and the afflicted, raised the dead (the Lazarus story, John 11:1-44).

When Jesus raised Lazarus from the dead, the Sanhedrin – the religious leaders and elders – were in trouble and they had to draw a plot against Jesus. “Many of the Jews, therefore, who had come with Mary and had seen what Jesus did, believed in him. But some of them went to the Pharisees and told them what he had done. So the chief priests and the Pharisees called a meeting of the council, and said, ‘What are we to do? This man is performing many signs. If we let him go on like this, everyone will believe in him, and the Romans will come and destroy both our holy place and our nation.’ But one of them, Caiaphas, who was high priest that year, said to them, ‘You know nothing at all! You do not understand that it is better for you to have one man die for the people than to have the whole nation destroyed.’” (John 11:45-50)

The elders of Jerusalem, the Sanhedrin sensed that Jesus was doing political work and threatened their positions and interests. His death, therefore, was politically motivated and he was guilty of rebellion and sedition and the highest provocation he did was when he entered the city of Jerusalem with a protest march, riding on a donkey to dramatize the people’s need for freedom from the Roman Empire and its puppets.

The sufferings of our people today are far worse than that of the Biblical Jewish society and we need to think and re-think our theology, our pastoral role in the society where injustices emanate from the center of governance. “Shoot them dead!” is the order of the president against the poor who cannot comply with the stay-at-home policy for lack of food and basic needs. Our government’s militarist response to the COVID-19 pandemic is among the worse, if not the worst in the world due to the negligence and incompetence of our leaders. There have been mass arrests instead of mass testing. But these are only in addition to the most deplorable injustices and declining human rights situation in the country since Duterte assumed office. The anti-drug war aimed at the poor. The anti-insurgency campaign that red-tagged all dissents. The abusive use of the law against dissent that jailed a huge number of people – farmers, indigenous peoples, and human rights defenders including lawyers, church people, and journalists now facing ridiculous fabricated charges in courts – many of them are already killed.

Today, we are challenged by John in his letter (1-John 3:16), “We know love by this, that he laid down his life for us—and we ought to lay down our lives for one another.” – Rappler.com

Bishop Antonio Ablon is currently a scholar of Hamburg Foundation for Politically Persecuted Persons in Germany and the Interim Coordinator of Europe Network for Justice and Peace in the Philippines. He is  still the Diocesan Bishop of the Diocese of Pagadian of the Iglesia Filipina Independiente but on study leave.

Here are other Reflections: