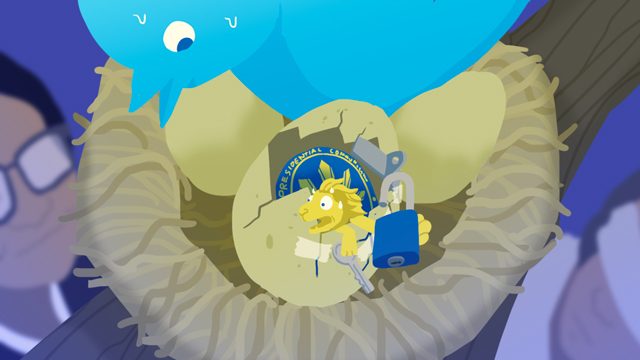 I woke up on Friday, May 8, to the tweet of Gang Badoy, a disaster response coordinator, that the official account of the Presidential Communications Operations Office had blocked her.

It was over her post on Twitter, asking the agency why, despite the P1.69 billion budget it’s given to “level up” government media, the PCOO had only managed to gain 1,095 followers on the microblogging platform.

Blocking on Twitter allows the account owner to restrict specific users from contacting them, seeing their tweets, and following them. For those who are unfamiliar with the platform, barring Ms Badoy from following the account is comparable to shutting PCOO’s office door on her (who also happens to be the founder of Rock Ed Philippines) because they find her undesirable.

But given that people-to-government communication and vice versa are now largely carried out through social media platforms, can the government, for whatever reason, ban or block its citizens from accessing them?

Trump did that too

In the United States, suits were filed, questioning the constitutionality of President Donald Trump’s blocking Twitter users who were critical of him and his polices. A judge swiftly declared the act as unconstitutional for violating the First Amendment, which guarantees free speech. Last March 24, a federal appeals court in New York affirmed the decision.

In the context of the Philippines, can the PCOO – which is President Rodrigo Duterte’s official mouthpiece – block Ms Badoy and deprive her of access to its official account?

In recent years, Twitter and Facebook have fast become the government’s most important channels of communication. Many agencies would announce policies and issuances through their social media accounts, giving the public real-time access to information. These platforms have also allowed us to engage with our government officials – asking them questions or expressing sentiments – from the comfort of our private spaces.

Just like in the US, the Philippine government’s act of blocking citizens is unconstitutional.

Article III, Section 4, of the 1987 Constitution guarantees not only freedom of speech but freedom from the imposition of any sanction or penalty after the speech. The blocking of Ms Badoy constitutes both a penalty for an uttered speech and also a prior restraint from future tweets to PCOO.

The action of PCOO was undoubtedly a punitive response to Ms Badoy’s tweet, which it found disagreeable. It was technically a “penalty,” and imposing it was unconstitutional as it breached the free speech clause. Not only was the penalty not sanctioned by law, it was imposed without due process or without hearing Ms Badoy’s side first.

Another free speech implication of blocking Ms Badoy was, it would prevent her from communicating her future sentiments directly to the PCOO. The same act of blocking constituted prior restraint from future utterances. Blocking the line of communication of a specific user over concerns that her future tweets will also be disagreeable would be no different from silencing her. Free speech requires an open door. Free speech would be nugatory if the intended recipient has shut its doors to unwanted speeches and utterances. (READ: Progressive lawmakers slam PNA, PCOO for ‘vilification,’ ‘red-tagging’)

The act of blocking also violated Ms Badoy’s constitutional right to petition the government for redress of grievances or the right to make a complaint or seek the assistance of the government. Unlike writing a letter or complaining in person, addressing the government through its social media accounts is not only more convenient, it presents a higher chance of getting a reply or action.

Twitter and Facebook allow direct access to the highest officials, skipping the whole bureaucratic line of employees and, thus, assuring swifter action. Doing it publicly – especially when a concern gains a traction of support from other users – also puts the government in a spotlight where it is herd-pressured to deliver. Thus, blocking a user from government pages unduly deprives or diminishes that person of his right to have a grievance redressed.

Ms Badoy’s right to information on matters of public concern, which is guaranteed in Article III, Section 7, of the same Constitution, was also violated. Under the provision, every citizen is guaranteed access government information relating to official acts, transactions, or decisions. This right is available to all citizens without distinction as to whether they are perceived as friends or enemies. Blocking Ms Badoy from PCOO’s social media account essentially denied her access to the information from a government agency. (READ: [ANALYSIS] Duterte crushes free expression amid pandemic)

This brings us to the last point: deprived of access to government information, her rights to redress of grievances and to freely express her sentiment towards the government violated, Ms Badoy is put in a position where she is not equal with users who were not blocked. The equal protection clause of the Constitution assures every citizen equal treatment by and equal access to her government.

In the end, the government, the PCOO in particular, has to be reminded of a passage in the landmark case of United States vs Bustos (GR No L-12592, March 8, 1918), written more than a century ago but remains very relevant to this day. Justice Malcom wrote:

The interest of society and the maintenance of good government demand a full discussion of public affairs. Complete liberty to comment on the conduct of public men is a scalpel in the case of free speech. The sharp incision of its probe relieves the abscesses of officialdom. Men in public life may suffer under a hostile and an unjust accusation; the wound can be assuaged with the balm of a clear conscience. A public officer must not be too thin-skinned with reference to comment upon his official acts. Only thus can the intelligence and the dignity of the individual be exalted. Of course, criticism does not authorize defamation. Nevertheless, as the individual is less than the State, so must expected criticism be born for the common good. Rising superior to any official or set of officials, to the Chief of Executive, to the Legislature, to the Judiciary – to any or all the agencies of Government – public opinion should be the constant source of liberty and democracy.

Postscript: Gang Badoy informed me that she was eventually unblocked by the PCOO and has regained access to its Twitter account. But considering her case is not the first time and other users somewhere may have been blocked by other government officials and accounts, I urge the Civil Service Commission to put in a place an official policy on this matter to prevent such arbitrary and unconstitutional actions. – Rappler.com