May 26, 2020 10:00 AM PHT
Facebook Twitter Copy URL
Copied
Laudato Si' has become one of the most influential social encyclicals that has been released by a pope 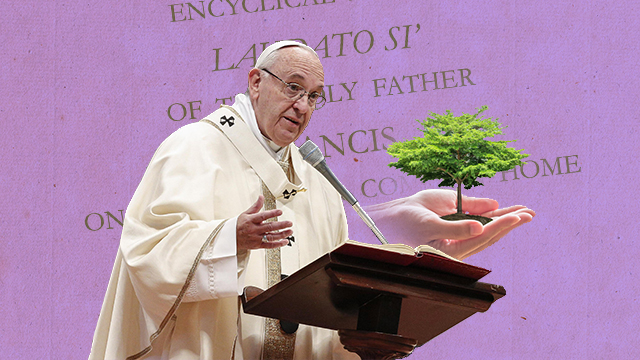 The “Encyclical Letter Laudato Si’ of the Holy Father  Francis on care for our common home,” released 5 years ago this week, has become one of the most influential social encyclicals that has been released by a pope. It certainly has changed the global debate on sustainable development and on climate change. It has become a rallying document for many concerned about the twin issues of environment and poverty. (READ: [OPINION] A change of heart: Living the Laudato Si way)

Like in any encyclical, Pope Francis quotes and cites many passages from scripture; the creation narrative, the story of Noah, and Jesus communing with nature all come alive in Laudato Si’.

The 3 most quoted books of the Bible in Laudato Si’ are the books of Genesis, Psalms, and Matthew.  He also cites passages from Exodus, Leviticus, Deuteronomy, Proverbs, Wisdom, Sirach, Isaiah, Jeremiah, Mark, Luke, John, Romans, 1 Corinthians, Colossians, and Revelations.

Lessons from saints and popes

Not surprisingly, saints are also quoted throughout this encyclical. There are 17 sources in the encyclical attributable to saints, excluding past popes who have already been canonized. Pope Francis refers to his namesake, St Francis of Assisi, through both direct quotes as well as descriptions from Francis’ disciple St. Bonaventure. The title of the encyclical of course comes from Francis’ Canticle of the Creatures.

St John of the Cross, St Basil the Great, St Vincent of Lerins, and St Thomas of Aquinas are also quoted in Laudato Si’.

In Laudato Si’, Pope Francis took the opportunity to catechize and cites extensively from the Catechism of the Catholic Church.

From all of these ideas, Pope Francis is able to weave a powerful and persuasive argument that human beings are called to be stewards of creation, a responsibility not only for nature but also for each other and the poor. From these texts, the Pope also articulates a Christian approach to environmental and poverty issues, where we are called to witness and do right by our planet and each other.

Dialogue with other traditions

Usually papal encyclicals quote or cite only those “above or equal” to the Pope – the sources cited in the preceding paragraphs. Surprisingly, in Laudato Si’, Pope Francis even makes references to the works of people from other denominations, and even other religions. He makes a fair amount of citations in reference to Ecumenical Patriarch Bartholomew I of the Orthodox Catholic Church, including Bartholomew’s Message for the Day of Prayer for the Protection of Creation, his 1997 address in Santa Barbara, California, his lecture at the Monastery of Utstein, and his speech, entitled “Global Responsibility and Ecological Sustainability,” which he read at the Halki Summit in Istanbul, Turkey.

Pope Francis also  quotes, in a footnote, Muslim spiritual writer Ali al-Khawas. Taken from Eva de Vitray-Meyerovitch’s Anthologie du Soufisme, al-Khawas is quoted as saying “Prejudice should not have us criticize those who seek ecstasy in music or poetry. There is a subtle mystery in each of the movements and sounds of this world. The initiate will capture what is being said when the wind blows, the trees sway, water flows, flies buzz, doors creak, birds sing, or in the sound of strings or flutes, the sighs of the sick, the groans of the afflicted…”

Pope Francis also uses various literary sources in this encyclical. Specifically, he references Paradiso from Dante’s Divine Comedy;The Life of Saint Francis and The Remembrance of the Desire of a Soul by Thomas of Celano; Das Ende der Neuzeit (The End of the New World) by Romano Guardini; and La irrupción del pobre y la lógica de la gratuidad by Juan Carlos Scannone.

By quoting and citing these sources from other religions, disciplines, and traditions, Pope Francis succeeds in this encyclical to engage in dialogue with the world. At the beginning of Laudato Si’, he expresses that as his aim, and clearly the use of these sources is an invitation to dialogue.

Experience of the global Church

One wonderful innovation in this papal encyclical is its heavy reliance on statements and letters issued by bishops conferences from all over the world. By quoting and citing from them, Pope Francis masterfully captures both common and unique experiences about the environment and poverty as peoples and nations of the world have experienced and are experiencing them.

As much as people like to call this an “environmental” encyclical, only two environmental documents are actually referenced by Pope Francis in Laudato Si’. These two documents are the 1992 Rio Declaration on Environment and Development, and the 2000 Earth Charter.

The Rio Declaration is a document created at the 1992 United Nations Conference on Environment and Development, informally called the “Earth Summit.” Outlined in this declaration are 27 principles designed to guide worldwide sustainable development. The Earth Charter is a declaration of principles by a civil society initiative to promote a just, sustainable, and peaceful global society in the 21st Century.

The influence of Laudato Si’

As we have pointed out, Laudato Si’ is an encyclical grounded on both ideas and experience, on science, yes, but guided by faith. Science alone will not help us overcome the challenges of environment and poverty. With this encyclical, Pope Francis calls us all to rid ourselves of our differences and preconceptions and unite to save this world that we all share as children of God. (READ: [OPINION] The coronavirus: A warning to care for our common home)

There are many ways of reading Laudato Si’. One could look at it as a political document, released to influence United Nations (UN) summits in 2015, such as the Addis Ababa conference on financing for development in July that year, the UN Sustainable Development Heads of State Summit in September that same year, and the Paris climate change conference in December of 2015. For sure, it had a moderate influence on those summits and contributed to good outcomes.

More than its political influence, in Laudato Si’, Pope Francis calls all people of good will to action, to global cooperation, to ensure environmental and climate justice, and to live an ecology of daily life. This is the true legacy of Laudato Si’. – Rappler.com

Toby Valenzuela just graduated from St John’s College in Annapolis, Maryland USA, while Bryce King is a law student at the Far Eastern University Institute of Law. They collaborated with Tony La Viña to write this article on the fifth anniversary of the release of Laudato Si.