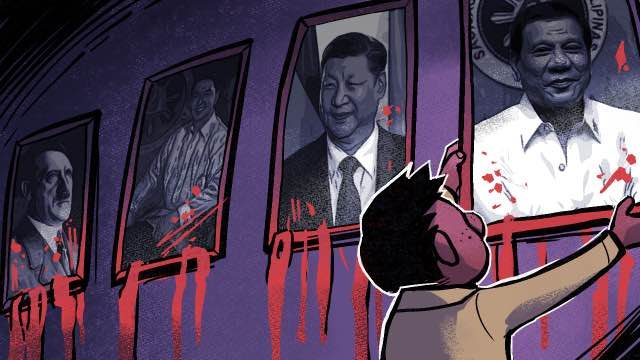 Facebook Twitter Copy URL
Copied
'The ultimate and ironic bad joke is actually on us non-terrorists: the Anti-Terrorism Act of 2020 is itself an official, legal act of terrorism' The Anti-Terrorism Act of 2020, a done deal but for the President’s signature and the formality of a published notice, revives a deep national trauma suffered from contemporary experience and aggravated under the current repressive regime.

The 14 years of martial law under Ferdinand Marcos saw the longest run of that traumatic experience — of warrantless arrests, of arbitrary detention, of torture and murder. Today it all threatens to come back, and the anti-terrorism bill is a definite portent. Any new security law, being necessarily the work of a malevolent regime unhappy with the old law, can only lead to worse consequences. And there’s no other way to characterize Rodrigo Duterte’s regime than malevolent — malevolent in thought, in word, and in deed.

Duterte idolizes Marcos and Hitler and aligns himself with a living, reigning comparison — China’s Xi Jin Ping (himself in the process of ramming a similar law down the throats of the people of Hong Kong). Off his lips, “kill” and “martial law” are exhortations that already have come to horrific realization.

Tens of thousands are dead in his war on drugs. A senator has been in detention for more than 3 years now on concocted charges. Other critics are harassed with whimsical court action. The oldest, biggest, and widest-reaching broadcast network has been summarily disenfranchised.

Meanwhile, at the height of a pandemic that has needed no official help in scaring people and keeping families, along with their furloughed breadwinners, locked down at home, the regime has deployed its police and troops; they are out in the streets in disproportionate numbers prepared to meet anyone who might be driven by hunger and desperation to venture out of lockdown in search of family sustenance.

What manner of mind could manage yet to think of terrorism of any kind other than that perpetrated randomly and on the scale of a pandemic by a deadly virus? Only a one-track mind could, one that thinks a pandemic is a job for generals too.

Indeed, it was debilitating to see the Senate pass the anti-terrorism bill — and pass it overwhelmingly and ahead of the Lower House, the original house of patronage; the Senate had been thought perhaps the last major institution in which, because of its tradition of independence, civil society could repose its flickering faith in democracy.

The last breeze of hope went out of one’s sails when the Senate president, Vicente Sotto III, succumbed in the worst of times to his characteristic excitement at listening to himself mouth what sounds witty to his simple mind and declared, “If you are not a terrorist you have nothing to fear,” and when forthwith otherwise independent-minded senators fell behind him in the service of the Duterte regime.

The regime is simply too arbitrary and too high-handed in its ways to be trusted with any law it can exploit for its own purposes, especially a law against a crime so broadly and conveniently definable as terrorism. Its very idea of crime and punishment is bereft of the two elements that give it the spirit of nobility, morality, and overall righteousness — the rule of law and justice.

In the form readied for presidential signing into law, the anti-terrorism bill is so loosely defined it could be any crime in the books now, only re-categorized as terrorism and penalized more heavily. To be sure, it is not confined to the classic context of terrorism as a crime committed against a state or a people in furtherance of an ideology or a political belief.

Its scope has been enlarged to encompass suspects simply fancied, as betrayed by provisions making any person who “shall threaten to commit” or “support” or “incite” or merely “proposes to commit” what is thought to be terrorism fair game, a candidate for a jail term of 12 years.

It is not, as Sotto facetiously declared, that only the terrorists have a problem here. If they have any problem at all it is somehow mitigated by knowing what they are and what dangers they face. But those falsely accused as terrorists, the innocent ones, are worse off in every way; they know they are no terrorists, yet it is not for them to say they’re not, but for the authorities, who have a law they can bend and even use as a weapon on them. (READ: [OPINION] Terrorizing us, but not the terrorists)

The problem grows worse. Not a single uncompromised voice, never mind a voice for civic and human rights, is enlisted in the council responsible for the implementation of the law. The Anti-Terrorism Council exclusively comprises presidential appointees. It is chaired by the executive secretary and co-chaired by the national security adviser, and serving under them are the secretaries of foreign affairs, defense, interior and local government, finance, justice, and information and communications technology, and the executive director of the Anti-Money Laundering Council. For its secretariat the council has the premier spy network — the National Intelligence Coordinating Agency.

The ultimate and ironic bad joke is actually on us non-terrorists: the Anti-Terrorism Act of 2020 is itself an official, legal act of terrorism. – Rappler.com