[EXPLAINER] Can government employees post criticism of the anti-terror bill? 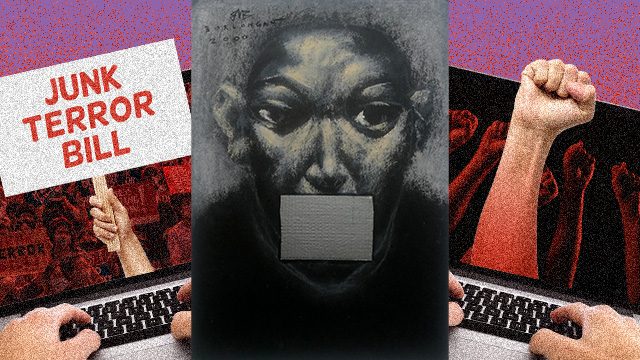 (Part 1: [EXPLAINER] Proposed Anti-Terror Act of 2020 a devil’s playground in the hands of a despot)

In recent years, social media networks like Facebook and Twitter have become the new platform for activism. We have witnessed this the past week, when news of the deliberation of the very controversial anti-terror bill triggered a wave of online protests, from ordinary netizens to movie stars and even beauty queens, whom we used to assume were either neutral or indifferent.

In this atmosphere of surging activism, I frequently get questions from employees in the government and private sector whether it is safe for them to speak out.

The constitutional guarantee of freedom of expression applies to all persons, regardless of the nature of their employment. It must be clarified, however, that the free speech clause in the Constitution, along with the whole Bill of Rights, was intended as a limit imposed on the government, preventing it from suppressing criticisms towards it. They do not ordinarily apply to private entities, like companies, in their dealings with private individuals. That would be covered by civil and labor laws.

For private employees, speaking against the government or activism per se is not a ground for termination or disciplinary action under the Labor Code. This would mean one cannot be punished for posting something on Facebook or Twitter or showing up at rallies.

The only limitation is when the method or means by which the expression is made would be so serious as to constitute a ground for termination or disciplinary action under the Labor Code. An example would be when expressing one’s sentiments or participating in a protest action leads to the employee’s gross and habitual neglect of his duties, like absenteeism; or when, in extreme cases, the protest is carried out in a manner constituting serious misconduct.

In certain instances, protests can constitute willful disobedience to the employer or company representative’s supposed “lawful” orders in connection with one’s work. If this is the case, then the burden will be on the company to prove the legality of the gag order or suppression of his employees’ right to speak out. It is also upon the employer to prove that the prohibition being imposed has a direct connection to or effect on the work being performed by the employee. Subjecting an employee to undeserved consequences would be tantamount to illegal dismissal, if it happened, and would subject the employer to damages.

It is the government employees who are in a trickier situation. Can public servants speak out against the very government that employ them?

It is worth reiterating that government employees, upon entering public service, do not leave their constitutional or basic human rights by the doorway. Thus, just like citizens employed in the private sector, they should be free to speak their mind in the manner and in the platform of their choice, their social media pages included. Bear in mind, however, that this right is not absolute.

It is correct to conclude that those who enter government service are subjected to a different degree of limitation on their freedom to speak their mind; however, it is not tantamount to the relinquishment of their constitutional right of expression otherwise enjoyed by citizens just by reason of their employment. Unarguably, a citizen who accepts public employment must accept certain limitations on his or her freedom. But there are some rights and freedoms so fundamental to liberty that they cannot be bargained away in a contract for public employment. It is the Court’s responsibility to ensure that citizens are not deprived of these fundamental rights by virtue of working for the government.

One of these limitations is in Section 5 of Civil Service Commission (CSC) Resolution No. 02-1316, which proscribes concerted activity or mass action of government employees when the same is coupled with an “intent of effecting work stoppage or service disruption in order to realize their demands of force concession.”

Another limitation is that exercise of free speech must be in accordance with the provision of Republic Act 6713 or the Code of Conduct and Ethical Standards of Public Officials and Employees.

Bearing in mind these limitations, it can be safely suggested that fair and factual criticism (or endorsement) of the anti-terror bill is protected speech and thus cannot be restrained or be a ground for disciplinary action.

However, the following must be considered before posting:

In case of doubt, it is my strongest assertion that cases like this should be resolved in favor of free speech. After all, Republic Act 6713 mandates public officials and employees to be “at all times loyal to the Republic and to the Filipino people,” not to any politician or appointing authority.

It also mandates them to “commit themselves to the democratic way of life and values, maintain the principle of public accountability” and to “at all times uphold the Constitution and put loyalty to country above loyalty to persons or party.” If speaking freely expressing his views on current political problems or issues is the way to do this, then it should be left free and unimpeded. – Rappler.com