May 14, 2012 4:41 PM PHT
Patricia Evangelista
Facebook Twitter Copy URL
Copied
Media has a right to its advocacy, and in fact should advocate, but to strap on a gun and say, 'try me,' is not being a journalist. It means being a thug. 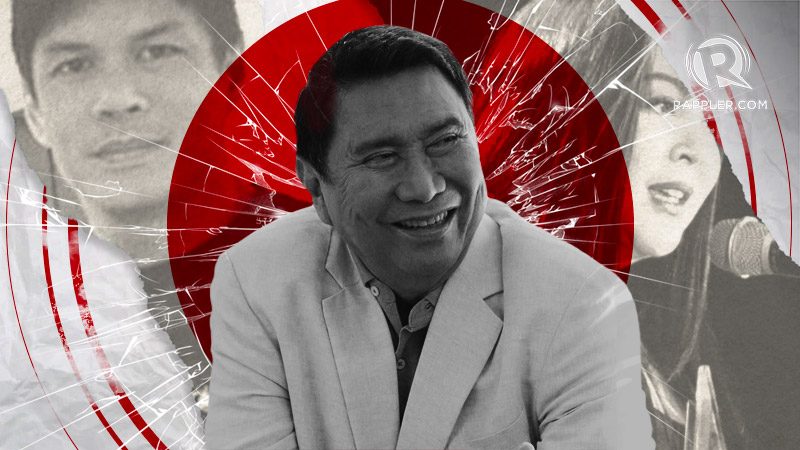 The code of the Tulfo is simple, so sayeth Mon Tulfo. A Tulfo will not hit a woman. A Tulfo will not draw first blood. A Tulfo will live in defense of the poor and the oppressed. Killing is allowed, if the cause is just. Guns are good, especially when the fight is unfair. The bad guys deserve what they get, and if they don’t get it from the law, they’ll get it from a Tulfo.

The brothers Tulfo are all straight, all lovers of women—“no homos in our family”—and they will wear sunglasses under studio lights, and cuss, son of a bitch. Their language comes from the side alleys of Asiong Salonga’s Tondo. Watch it, they say, or we’ll be coming after you.

They are charming, they are brash, and they all live in the service of a society in need of their protection. The Tulfo brothers say they are capable of violence, but that they are “hard men with soft hearts” who stand for the underdog.

They are the messiahs and the rebels and the old-fashioned heroes who thunder through the streets, reeking of testosterone, gearing for a fight.

Welcome to the world of the Tulfo brothers, where the year is 1980, the film is black and white, and the subtitles require exclamation points.

Enter Ramon Tulfo, eldest of the 4, son of a soldier whose father was a soldier. He is an action journalist, he says, he will not stop at reportage, he will name names and take to the streets, he will point his finger at the police chief and the president’s husband, he knows he has power and he will use it as he sees fit, the same as his brothers and his father before him.

And if he is loved and hated, it’s part of the job. The other journalists may be willing to stand by and watch, but not Tulfo, never Ramon Tulfo.

On Monday, May 7, 2012, the defender of the oppressed walked into a scene of abuse and humiliation, a moment, he said, that he found “unacceptable.” There was a woman, he said, a fat matron with an oddly familiar pretty face, howling away at a cringing airport employee. The woman had lost her luggage, was screaming and cursing, you stupid woman, you moron, you won’t have a job when I’m done with you.

So the Tulfo stops to play the hero, not between victim and villain, as is expected of a self-proclaimed “action journalist,” but to the side, camera-phone in hand, as the alleged cursing and berating went on and on. And so when the villain’s husband comes charging in, demanding to know what this man in the photographer’s vest is doing, supposedly grabbing for the damning phone, Mon Tulfo shoves the man away.

Nobody threatens a Tulfo without asking for a fight.

The narrative changes with the storyteller, and with every telling. The cowboy kicked a woman. The actor whaled at an old man. The beauty is now reduced to a screaming banshee. The charges and counter charges are flying. The questions are unanswered.

Why, for example, should it be the natural reaction of a man to physically shove another man, threatening or otherwise, instead of reporting him to the authorities. Or why, on the other hand, is there little astonishment at the righteousness of the actor who forgot that he moves in a universe where public figures are judged for public actions.

It is an odd twist of fate that made the morning at the airport a meeting between the action star and the vigilante, and an odder twist that made violence a seeming inevitability instead of the last and worst conclusion in a place so public that it should have stopped any explosions of temper.

But this is less a story about a scuffle than it is a story about what makes heroes in a society where 3 men can go on national television to threaten physical revenge and punishment. The brothers Tulfo hijacked the airwaves with the comfortable assumption that this sort of thing is not only acceptable, it is expected.

The reason the public runs to the media and not to government is because institutions have failed to serve. That the Tulfos exist and are called heroes for their vigilantism demonstrates the extent of that institutional failure, the same failure that has the New People’s Army “protecting” villages from the military, and the same strange compulsion that had Davaoeños cheering Sara Duterte for the punch she now regrets as the worst sort of fame.

Media has a right to its advocacy, and in fact should advocate, but to strap on a gun and say, “try me,” is not being a journalist. It means being a thug.

“My brothers are capable of violence,” says Tulfo. But Santiago and Barretto have nothing to fear, he says, because Mon Tulfo told his brothers to stand down. The law, apparently cannot stop a Tulfo, only a Tulfo can.

Tulfo says it would have been justified for him to take out his gun if he had it during the scuffle, although he is glad he didn’t. That the moral code of the Tulfo is far removed from that of, say, Jesse Robredo and the Philippine Constitution is a dangerous thing, and it is by no means stopped by an MTRCB suspension, especially when Tulfo goes on the record and calls his brothers stupid, not for their threats, but for making their threats on national television.

“If they didn’t say it on television,” he said, “then maybe we could have had our revenge.”

It is difficult to make any judgments on who was responsible. What is known is this, that Ramon Tulfo fought and lost, that Raymart Santiago fought and won, that Claudine Barretto fought and wept, and that the headlines online and on air now boil in the sweet sticky juice of the perfect story.

The lines are being drawn, Tulfo versus Santiago, the line shifting for whatever convenient morality either side is using. Tulfo says what he did has made him a bigger hero to the people, because he was seen as a man willing to rescue the oppressed, never mind that the fistfight had little to do with any rescuing.

Santiago talks about his poor wife and child abuse, forgetting that his children watched their daddy and his friends choke a grown man. The beating up is fine, he says, if only the wife he protects and adores wasn’t involved. That both men share the same macho morality is an interesting spin to the story, at least until someone else with a gun decides the bad boys have it right. – Rappler.com