Apr 24, 2014 7:30 PM PHT
Julie Bishop
Facebook Twitter Copy URL
Copied
Trade between Australia and ASEAN countries has increased from Aus$45B to $92B over the past decade. Canberra is willing and able to be a partner in the economic agenda for the region 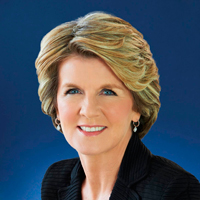 On a recent visit to Southeast Asia, I was reminded of the strength of Australia’s partnership with the countries of ASEAN – the Association of Southeast Asian Nations.
In Malaysia, I met some of the 300,000 alumni of Australian universities, many now serving in key government and business positions.

In the Philippines, I saw first-hand our joint relief effort in the wake of Typhoon Haiyan and was joined by hundreds of school children to celebrate a new $150-million Australian initiative for basic education needs.

In Vietnam, I was reminded further of our cooperation with projects such as the Australian-Asian Development Bank co-funded Cao Lanh Bridge that will connect communities in an economy of nearly 90 million people.

The 10 nations of ASEAN have the potential for strong economic growth that will dramatically lift living standards across Southeast Asia, according to a recent report by the World Bank.

For example, the report highlighted studies showing that ASEAN could boost the welfare of its members by 5.3% or US$69 billion and its economic growth by up to one percentage point through deeper economic integration.

Australia is willing and able to be a partner in the economic agenda for this region and to increase our existing deep economic engagement, that has already seen two-way trade increase from Aus$45 billion to $92 billion between Australia and ASEAN over the past decade.

It is timely that we reflect on Australia’s partnership with ASEAN, as we reach the milestone this month of 40 years of bilateral relations.

We have worked with all ASEAN members to realize our countries’ shared aspirations “to live in a region of lasting peace, security and stability, sustained economic growth, shared prosperity and social progress.”

ASEAN countries have made great progress toward this goal, and together are working toward the realization of a historic, and welcome, “ASEAN Community” by the end of 2015.

The nations of ASEAN have in recent years grown at twice the rate of world economic growth, doubling their share of global GDP and reducing poverty significantly, by up to half in some cases.

They have led the way in developing regional security architecture that is fostering a cooperative region in which states act consistently within international law, enjoy freedoms of navigation and overflight, and are free from coercion and intimidation.

And they are strengthening their capacity to respond to natural disasters, through better coordination of their relief efforts and those of partners like Australia.

I am determined to increase our engagement in our neighborhood.

The Australian government has launched the New Colombo Plan to support young Australians to study and undertake internships in the region. I will be inviting all ASEAN countries to build on this year’s two pilot locations of Singapore and Indonesia, from 2015, complementing Australia’s extensive education programs with the region.

I also want to work with ASEAN to strengthen regional cooperation, in particular through the East Asia Summit. It has the right mandate and membership for enabling the region to deal with strategic issues – be they security, trade, or financial.

And as a partner to ASEAN’s Coordinating Centre for Humanitarian Assistance, Australia will continue to work with ASEAN to ensure timely and effective responses to disasters.

I am personally committed to Australia’s relationship with ASEAN and its member states. So much so that I will be visiting all 10 ASEAN countries before our leaders meet at a Commemorative 40th anniversary Summit in Nay Pyi Taw later this year.

Australia’s future lies in our region – our geography is our destiny. – Rappler.com

*The Honorable Julie Bishop is the foreign minister of Australia.