Is the Filipino middle class over-taxed?

Aug 3, 2014 12:05 PM PHT
Facebook Twitter Copy URL
Copied
If the middle class feels the heavy weight of taxation, does the evidence bear this out? Public furor over the pork barrel scam combined with a more aggressive tax collection campaign by the BIR in recent months has yielded some fairly strong sentiments about the state of taxation in the country. At one point, social media flooded with ideas of staging a tax boycott, or calls for voting rights to be given only to taxpayers. (As if the poor don’t pay taxes at all – but that should be the subject of another op-ed). If the middle class feels the heavy weight of taxation, does the evidence bear this out?

A casual analysis of tax policies in the ASEAN suggests that the Philippines has the second highest average tax rate (after Vietnam and Thailand). On the other hand, Singapore has the lowest marginal tax rate at both ends of its tax bracket spectrum, at 20% for the wealthiest and 2% for the lowest qualifying income tax payers. (Compare this with 32% and 5% for the Philippines.) If we also consider the value-added taxes in ASEAN, the Philippines comes on top (or near the top) of the most taxed in the region.

If we focus on the Philippine middle class, Virola et al (2013) provide a handy description based on their statistical analysis of the distribution of incomes in the country. In order to be considered part of this group, one’s annual gross income should range from about P64,317.00 to P787,572.00. That’s roughly P5,359.75 to P65,631.00 in income a month. We acknowledge that many of you will find this range too large. But if we take this to be a useful illustrative guesstimate for now, then that study indicates that there are 4.66 million families (roughly 25% of the total population) in the middle class. (Compare this with roughly 14 million families (or 75% of the population) belonging to the lower class, of which over 4 million families fall below the poverty line.) 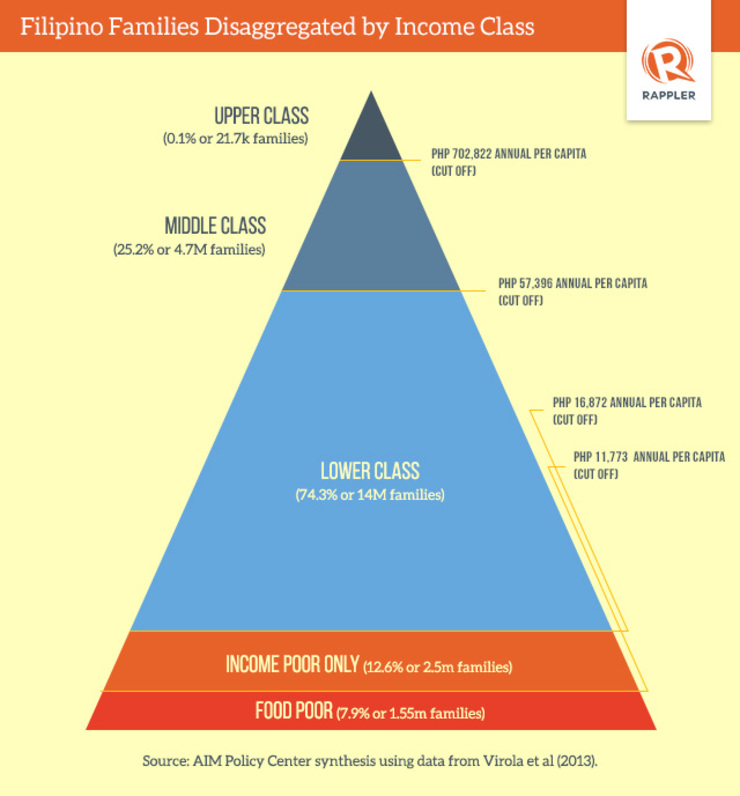 It seems one primary concern for many in the middle class is the growing sense of over-taxation. One way this can happen is if the tax brackets are not adjusted for inflation – over time, this will likely result in rising nominal incomes pushing a growing number of income taxpayers into much higher tax brackets, even as their real (or inflation-corrected) incomes have not increased (or not by as much).

“Bracket creep” could contribute to what economists call “fiscal drag”—a weakening of aggregate demand due to excess taxation of a growing number of taxpayers. And as more taxpayers are pushed to the same tax bracket (wherein incomes still have a high disparity even within that bracket), then the progressiveness of the tax system may decline over time. (Note that progressivity is better achieved by imposing higher tax rates on those with greater capability to pay, i.e. the wealthy. This becomes less likely when more and more people fall into the same tax bracket and face the same tax rate.)

If any of our readers encumber these jobs, then, congratulations! You now face the same tax rate as the wealthiest people in the country! (And that includes movie and television actors who make up to P12 million per month in income.)

[1] The interested reader may wish to read the annex providing details of these 101 occupations whose incomes and marginal tax rates have increased from 2008 to 2012.

Our tongue-in-cheek comment aside, clearly, there is scope for considering income tax reforms when too many people with such disparate incomes end up with the same (in this case the highest) tax bracket. This goes against the principle of progressivity, and it most likely exacerbates inequality.

In response to these issues, and motivated by the desire to give the middle class some tax relief, tax reform proposals have been put forward by Senator Juan Edgardo M. Angara (Senate Bill 2149), Senator Paolo Benigno A. Aquino IV (Senate Bill 1942), and Senator Ralph G. Recto (Senate Bill 716). Table 2 summarizes the tax revenues under the existing tax regime (i.e., the baseline) and the estimated tax revenues based on the senators’ proposals. For purposes of comparison, the relative change from the baseline revenue is also reported for each of the proposals.

What happens to revenues and progressivity?

Predictably, providing relief implies a possible reduction in tax revenues (at least in the short term). Senator Aquino’s proposal could have the lowest revenue loss at 1 percent of the estimated total revenue under the existing tax regime. (The main reason is that they also propose to increase the tax rate of the wealthiest.) This is followed by Senator Recto’s proposal (at 5 percent of the total revenue under the existing tax regime).

Initially, Senator Angara’s proposal could decrease total revenue by only 3 percent. In 2016, the decrease could rise to about 15 percent. In 2017 (and onwards, once the new regime is made permanent), the decrease in revenues compared to the baseline (2012) revenues, could increase to 25 percent for the Angara proposal. This is largely because his proposed tax cuts are the deepest, and they also apply (at least in part) to some of the wealthiest in the country.

It should be noted that all these figures are based on comparative static calculations that do not accommodate behavioral responses or adjustments by taxpayers. They are merely illustrative, given the information on income taxpayers that are currently publicly accessible. In other countries where tax cut discussions are much more advanced, there are arguments suggesting that tax cuts for the wealthy could translate to more spending, investments and job creation.

The preceding analysis is illustrative and should not be considered as a final assessment of the 3 different income tax proposals being deliberated in the Philippine Senate. The three Senators should be credited for pursuing these reforms, which (hopefully) will also help elevate the awareness of the public to revisit issues such as tax progressivity and equity for the country’s income tax regime.

Reforms in public finance cannot just focus on the spending side (e.g. shutting down PDAF, promoting bottom up budgeting, and improving transparency and participatory governance reforms in budgeting). Addressing revenue-side issues will go a long way in winning back the hearts and minds of taxpayers. (And yes, that also includes the poor.) – Rappler.com

Ronald U. Mendoza is Associate Professor of Economics and Executive Director of the AIM Policy Center, while Enrico Gloria is an Economic Research Associate handling public finance research. The views expressed herein are theirs and are not necessarily those of the Asian Institute of Management.