A nation of billionaires, dynasties and yayas 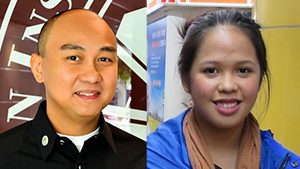 Facebook Twitter Copy URL
Copied
Breaking out of this inequality trap is going to take brave leaders on both sides of business and politics to open the floodgates for competition.

“When the wealth of a country is used by a handful to make the rest of the population virtual slaves, that is unhealthy because it’s no longer a democracy.”

So said one of the firebrands of the Philippine Senate in 1969, during the release of a report on inequality and poverty in the Philippines. Senator Benigno “Ninoy” Aquino, Jr., then 36 years old, went on to describe how 80 percent of Philippine households lived in poverty, of which about a third lived in severe deprivation and misery.

Fast forward some 45 years later; and we are face-to-face with much the same stark reality. If we turn to a recent study by government statisticians, only about 22 thousand families belong to the group earning about PhP60,000 or more a month in the Philippines (Figure 1). This is around one-tenth of 1% of the total households in the country.

The vast majority of households – over 18 million accounting for over 90% of the total – belong to the poor and low-income group earning less than PhP5000 per month. While experts still debate the exact figures due to well-known non- or under-reporting of incomes by some survey respondents (notably the very rich), most would agree that the figures above are likely to underestimate the true degree of inequality in the country. 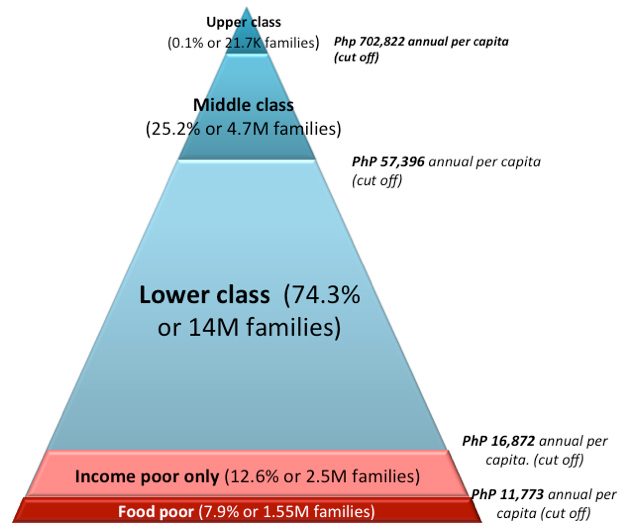 Inequality per se is not bad.

Many societies tolerate (or even celebrate) some degree of inequality in so far as it incentivizes people to work hard, innovate, save, invest in education, and take calculated risks in entrepreneurial activities. This is the “good inequality” that moved JK Rowling to write the next Harry Potter novel, Bill Gates to pursue the next technological innovation, Steve Jobs to design the next Apple product, or Christopher Nolan to produce the next blockbuster movie. They became very rich relative to the rest of us, but nearly every one of us benefited from their contributions to arts, popular culture, and technology.

The problem arises when the inequality of outcomes is rooted in an inequality of economic opportunities. This exists amid wide differences in the quality of education, a general dearth of decent jobs, and an uneven economic environment that favors larger firms while driving many smaller firms into informality.

Inequality of this type can lead to a more volatile and less efficient economic system. The concentration of economic opportunities within the hands of a few is essentially the “uneven playing field” that characterizes the Philippine economy today.

Good for billionaires and politicians, but bad for yayas?

Prof Cielito Habito of Ateneo de Manila wrote in 2012 that “growth in the aggregate wealth of our 40 richest families in 2011—which Forbes Asia reported to have risen by $13 billion in 2010-2011—was equivalent (in value) to 76.5 percent of the growth in our total GDP at the time…this ratio was only 33.7 percent in Thailand, 5.6 percent in Malaysia, and 2.8 percent in Japan—suggesting that income inequality in the Philippines is much worse than in several of its neighbors.”

But it’s not just the economic elite that appears to have done very well in recent years. For comparison, we consider the average net wealth of both the upper and lower houses of the 15th Philippine Congress.

The Philippine economy grew by 3.7% in 2011, while the net wealth of senators grew four times faster over this same period. Similarly, in 2012 Philippine GDP grew by 6.7%, while the net wealth of senators expanded by over 30% during this same period. The average Philippine Congressman did not do so bad either, posting about 13% and 7% wealth gains during the same period. (While notions of wealth and economic growth are not exactly the same, these comparisons could still be illustrative.)

Assuming of course that all of this wealth has been created legally, there is nothing overtly wrong with the economic and political elite doing very well financially during this time of plenty for the Philippines.

The question is whether the rising tide is lifting all boats. Certainly it is not.

Hunger incidence according to SWS fell only by less than one percentage point in the course of this reference period – from 19.1% of the population in 2010 to 18.3% in 2014. Self-reported poverty also increased from 48% of the population to 54% during this period. Official poverty figures indicate that poverty has been stuck at around one-fourth of the total population in the past decade.

On top of this, inequality across Philippine regions underscrores the significance of being born on the “right” island. Drawing on data reported by the Human Development Network and UNDP, children born in the National Capital Region are more likely to enjoy human development levels in education and health akin to fast growing emerging market economies like Estonia, Brazil and Mexico. On the other hand, children born in Maguindanao, Sulu and Tawi-Tawi will grow up with human development levels comparable to conflict-plagued African countries like the Congo, Niger and Central African Republic.[1]

In a related article we have argued that unequal access to political power and democratic processes – reflected by the persistence and predominance of political dynasties—represents the political side of economic inequality. In fact, political inequality and economic inequality go hand in hand. Both spheres have become largely anti-competitive; and it would be difficult to ameliorate one without reforming the other.

In fact, these links have long been recognized. More than 45 years ago, the 36-year-old Senator Aquino already exposed  how the monopoly of state power by one dynastic family conspired with various monopolies in the economic sphere:

Much has changed since those days; but the risks of monopoly in both the economic and political spheres still plague the country. Our conglomerates have become much larger; and a few have helped the country penetrate valuable export markets. Yet one wonders whether all of them promote fair competition and innovation, or instead, derive their success from protectionism and its captured Philippine market.

Philippine political dynasties have also proliferated, producing as one analyst called it, many “mini-dictatorships” across our different provinces. Do all of them pursue good governance, citizen empowerment, and more inclusive politics? Here’s a fact to think about: based on our ongoing monitoring, about 8 out of every 10 of our Governors belong to dynastic clans. And of these dynastic governors, only about one-fourth of them can claim that not one of their family members in elected office have been implicated in criminal, administrative, or election-related offenses.

While only among the first steps, the Competition Policy Bill could help break the monopolistic (or oligopolistic) patterns on the economic side, while the Anti-Dynasty Bill could create similar space for new players and more competition on the political side.

Until these main blockages to competition are removed, many other fundamental reforms are far less likely to prosper (or are going to be far less ambitious) due to the unequal economic and political landscape that is expected to give birth to and nurture these “inclusive development reforms”.

Breaking out of this inequality trap is going to take brave leaders on both sides of business and politics – including more progressive business tycoons and more benign political dynasties – to open the floodgates for competition.

International economic history suggests that no country has ever industrialized and achieved the next higher stage of development, without either of two actions: enlightened elites from the inside opening the doors to more competition; or many more people from the outside – notably the youth – breaking down the door itself. – Rappler.com

The authors thank David Yap and Fred Cruz for helpful inputs. The views expressed herein do not necessarily reflect those of the Asian Institute of Management.