In Batangas, a battle against coal 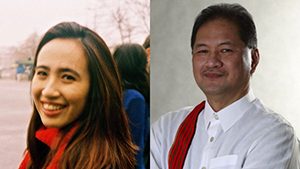 Facebook Twitter Copy URL
Copied
If companies like JG Summit truly believe in securing energy independence for this country, then dirty, dirty coal has got to go

Batangas City finds itself in the middle of a fight between its citizens and JG Summit Inc., a holdings company of the Gokongwei Group, as the company plans to put up a 300-megawatt coal-fired power plant in Barangay Pinamucan Ibaba.

Archbishop Ramon Arguelles is leading the charge against the proposal, as coal is considered one of the dirtiest forms of fossil fuel and thus contributes greatly to climate change and causes environmental degradation.

In 2011, Batangas City was conferred the Gold Award for its Environmental Code (E-Code), and the Silver Award as a Livable Community by the International Awards for Livable Communities. Arguelles and the anti-coal coalition argue that a coal-fired power plant would greatly jeopardize that prestigious status, citing not only the power plant’s potential carbon emissions, but also the potential for its waste to contaminate the surrounding areas. Fly ash, which contains heavy metals, will immediately affect surrounding barangays and their population of over 200,000 residents. The proposed coal power plant could undermine the city’s world renowned E-Code, jeopardize the health of its residents, and contribute to climate change.

Clean coal is a myth.

Circulating fluidized bed combustion (CFBC), the technology that JG Summit plans to use for this proposed plant, increases efficiency but produces four times more ash than pulverized coal power plants, which makes it an even worse health hazard. And while CFBC increases efficiency and lessens CO2 emissions, it does not make enough of a dent to decrease the already massive emissions of coal power plants. A coal-fired power plant that is less dirty is not clean.

The coal industry is also taking a step further in making coal “cleaner” through a controversial process called carbon capture and sequestration (CCS), where carbon emissions are captured and injected deep into the earth. This requires some massive infrastructure, which the Philippines currently does not have. If energy companies are committed to “clean coal,” then they would have to build CCS infrastructure themselves, and thus burden the consumers with the cost.

A report on CCS produced by the Intergovernmental Panel on Climate Change (IPCC) estimated that energy costs would increase 50-100% if CCS is integrated into coal power plants. The Philippines already has one of the most expensive power rates in Asia, and the technology of “clean coal,” along with the steady increase of global coal prices, would certainly aggravate the situation.

The Department of Energy (DOE) has approved 26 new coal power plant projects all over the country, setting the Philippines on a path to coal dependency for the next half-century. Such a path is contradictory to the President’s speech at the UN Climate Summit in New York last September 2014, wherein he told other world leaders that the Philippines “is addressing climate change to the maximum with our limited resources,” singling out the Renewable Energy Act that was passed in 2008. Only 26.4% (2013 figures) of our energy mix is renewable, with more plans to put up coal power plants than renewable energy sites. Clearly, this does not reflect the President’s words in New York.

The fact that most energy companies insist on putting up fossil fuel plants means that the focus is only on the short term, ignoring the fact that renewable energy has had enormous technological advances over the span of a few years.

Wind and solar power is now cheaper than ever before – even cheaper than most forms of fossil fuels in some areas, and storage, considered to be renewable energy’s Achilles heel, has found its match with the announcement of Tesla’s Powerwall, and its bigger, made-for-utility sister, the Powerpack.

Tesla’s new batteries have indeed reinvigorated the renewable energy market, making wind and solar even more viable for an expanded mainstream use. But what’s impressive about Tesla’s new line of storage products is not the technology they use. After all, what the company basically did was to enlarge technology that was already available and package it in a sleek design. The greatest accomplishment of Tesla’s new batteries is its ability to empower a worldwide community of innovators and individuals, especially those from developing countries.

Along with its electric cars, the patents of both the Powerwall and Powerpack fall under the company’s open source policy, which means that anyone can use Tesla’s patent in “good faith.”

If a Filipino engineer finds himself able to recreate the Powerwall at a cheaper price for the Filipino market, than he may do so without fear of being sued by Tesla. This is a revolutionary concept that has the ability to make Tesla’s technology not only accessible to those who need it, but also at a much more affordable price.

With all of these strides being made in the renewable energy market, it’s not a surprise that when we look at the Philippine energy situation, we see a reality that’s frustrating at the best of times.

The proposed coal-fired power plant in Batangas City has made Batangueños extremely frustrated, because there are options that are much better than dirty energy.

In Lian, Batangas – a mere 77 kilometers north of Batangas City – a 2-megawatt solar power plant built by Lucio Tan’s Absolut Distiller Incorporated (ADI) has already started operations. The power plant cost P189 million ($4.22 million) and a mere two months to build, a stark contrast to JG Summit’s P26.8 billion ($600 million) price tag and three-year construction time for the 300-megawatt coal power plant. The numbers are stacking up against dirty energy, and the people of Batangas City are well founded in their stand against coal.

As one of the most climate vulnerable nations in the world, we should be extremely conscious of decisions that have long-term effects, and what kind of energy we build and consume is one of those decisions.

The government’s feed-in-tariff scheme, which allows renewable energy producers to sell their power at a fixed rate of P9.68 per kilowatt-hour for the next 20 years, makes renewable energy power plants not only a good step towards lesser carbon emissions and ultimately a zero-emissions world, but also sound investments that can be profitable for corporations.

Pope Francis is expected to release his encyclical on the environment in more or less a month from now. His Holiness has spoken many times about the importance of environmental stewardship and how the poorest of the poor are affected by climate change.

Developing countries like the Philippines are the most vulnerable to climate impacts. Typhoons like Ondoy, Sendong, Pablo, and Yolanda, are harrowing reminders that we are already feeling its effects. This is where Archbishop Arguelles is coming from, leading the charge against coal in Batangas City.

Alleviating poverty and energy security go hand in hand, and if the government is serious about these two objectives, then it must stop approving coal power plants left and right, take a genuine and committed look at what renewable energy has to offer, and take part in the revolution.

This goes the same for companies like JG Summit – if they truly believe in securing energy independence for this country, then dirty, dirty coal has got to go. – Rappler.com