Senator Nancy Binay, you got it wrong Senator Ma. Lourdes Nancy Binay-Angeles, popularly known for her 2013 campaign name “Nancy Binay,” recently attempted a curious analogy. Reiterating her position against an Anti-Dynasty Law, she noted among her reasons that a family of politicians is no different from a family of doctors – a well-known and widely accepted familial pattern in the medical profession.

The comment generated some jeers from doctors and non-doctors alike, and it seems that the gist of the reactions could probably be summarized by this social media post (by a medical doctor who will remain unnamed):

“A family of doctors is NOT like a family of politicians. We do not earn our degrees by popularity or by democratic voting. We earn it. We work hard for it. And having our medical license does not depend on the majority. It’s sad you had to use that analogy to justify your rejection of the Anti-Dynasty Bill. People probably know the real reason behind it. And I think it’s not really because of a noble family practice or occupation. You do not undergo an operation or get treated based on who has the greatest number of ballots. You also don’t have to amass a significant amount of knowledge, lose hundreds or thousands of hours of sleep, spend a number of years studying and mastering your craft, and then take numerous exams before you can enter politics. But maybe it’s time that you should.”

Essentially this doctor’s – as well as many other citizens’ – reaction to Senator Binay reflects a growing concern over the threat to meritocracy in our political system. Skill, and the many investments necessary to earn it, cannot simply be inherited. The ability to practice any craft well cannot simply be passed on, as if it’s a birth right, to one’s progeny.

If that’s the case, then should public position and political power be any different?

In meritocratic and well-functioning democracies, leaders are often selected based on key traits necessary to address complex public sector challenges. Political parties in these well-functioning democracies help to recruit and develop future leaders among their ranks—effectively sorting, developing and investing in human capital not just in terms of factors such as skill, leadership potential and gravitas, but also as regards their shared view on policy and ideology.

There is strong evidence suggesting that the leadership selection process in the country is already failing these meritocratic ideals. The failure stems primarily from dynastic politics.

Political dynasties, or the phenomenon where families dominate the arena of elected politics, move the political system away from the meritocratic ideal.

Instead of track record, there is an over-emphasis on name recall. Instead of defining the most convincing policy platform, patronage becomes the engine for re-election. Instead of a rigorous selection process for the candidates of the political party, the decision to run is simplified into a question of leadership succession from specific political clans. In many cases, only political clans can successfully field candidates for elected office.

Dinagat Islands offers an interesting example. It’s a province that has been ruled by the Ecleo clan since the creation of this province in 2006. At present, the Ecleos in office include the Governor, Vice Governor, three Mayors, two Councilors, and two Board Members (Figure 1).

With this kind of dynastic domination, it is difficult to imagine proper checks and balances still functioning. The very essence of democracy is lost. And if power is passed on to progeny as a birthright, then perhaps they might as well live in a castle. 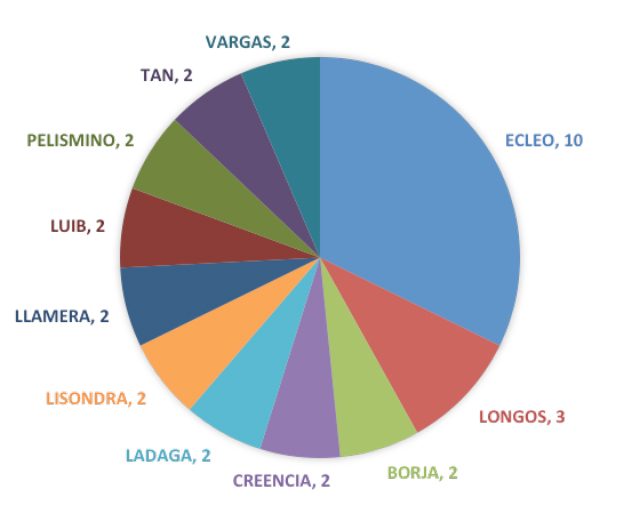 Crowding out many youth leaders?

The influence of political dynasties appears to extend up to the very institution that ironically has been set up to help develop future agents of change and reform, the Sangguniang Kabataan (SK).

Ideally, the SK is the training ground for youth leaders, even offering a seat with voting power in the municipal/city councils and provincial boards. Yet, a recent survey finds a growing perception among youth constituents that SK has become ineffectual and is reduced to a “stopover” or “waiting area” of a future dynastic politician as he/she prepares to succeed the older generation of his/her family. The situation is clearly unfair to many aspiring youth leaders whose only fault is having an unknown last name.

In fact, drawing on the AIM Policy Center’s database of local government leaders, many cities and municipalities in provinces like Laguna, Rizal, Zambales, Maguindanao, and Dinagat Islands have barangay-level SK chairpersons that are related to an incumbent or previously elected public official (Figure 2).

Once again, if we take Dinagat Islands as an example, two of its municipal SK chairpersons belonged to the Ecleo political clan. One is the son of the former vice governor, while the other is the grandson of the former governor. As for Maguindanao, 10 dynastic SK chairpersons came from one political clan. Dynastic politics already prevents many capable young people from being considered for leadership positions.

Figure 2. Municipalities Flagged As Dynastic and Non-dynastic in Selected Provinces Just like the SK, Party-list representation is also supposed to provide another platform for inclusion, yet this too has been “captured” by political dynasties. The Party-List Act of 1995 carved out party list representation to include underrepresented political views or marginalized sectors in national legislation, particularly those from the sectors of labor, peasant, urban poor, indigenous cultural communities, women, youth, and similar groups. Yet, of the 56 party-list representatives in the 16th Congress, 25% have at least one incumbent relative in a local government. Hence, one-fourth of them are occupied by dynastic politicians.

Restoring Meritocracy and the Right to Elect Accountable Leaders

Political dynasties, by their nature, create a number of problems in societies that seek to be meritocratic.

It is curious how Senator Binay and others who oppose the proposed Anti-Dynasty Law argue that such a law would diminish the rights of dynastic family members who wish to run for office.

An Anti-Dynasty Law actually helps safeguard those rights for ALL citizens (and not just dynastic clans), by providing order and inclusiveness in the way leaders are selected. An Anti-Dynasty Law also opens much-needed breathing room to resuscitate meritocracy in the Philippines, since the evidence suggests that it is already dying at the hands of political dynasties. – Rappler.com