Jul 9, 2015 10:16 AM PHT
Facebook Twitter Copy URL
Copied
The uneven growth pattern in Makati is probably something we should address rather than emulate. Inequality involves challenges that would not be solved by free movies, spa services and cake. 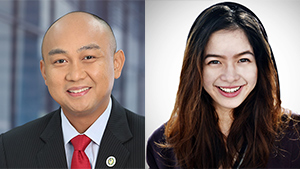 The Philippine Cities and Municipalities Competitiveness Index of the National Competitiveness Council measures key pillars of competitiveness such as economic dynamism, government efficiency, and infrastructure. It offers a practical and comprehensive assessment of whether our key cities have what it takes to compete for investments and talent.

Of 136 cities included in this survey, Makati ranked 1st in its latest ranking (see Table 1).

Table 1. Competitiveness Ranking of Cities for 2014

This is part of what puts some weight on the claim by presidential aspirant Jejomar Binay: “Ganito kami sa Makati – kung ano ang ginawa namin sa Makati, ay gagawin namin sa Pilipinas.” He refers not just to Makati’s relative success, but also to the severe lack of development in the rest of the country.

It is tempting to believe his statement – certainly a seductive message for the rest of the country that hungers for the kind of wealth and public services that Makati residents seem to enjoy. Yet, anyone who really understands the role Makati plays in the overall economy and how this ties to this city’s finances would realize that there are issues not worth emulating in this city.

Because of the uneven growth pattern of the country, Makati is one of the cities benefiting from the lion’s share of the country’s economic growth and subsequent tax revenues. This fuels the kind of public spending in that city that is unlikely to be possible in the rest of the country, at least for many years to come.

Some would even say that part of Makati’s spending programs is not really necessary, and perhaps even unfair when taken from a national perspective. Here’s why.

Using available official data on public spending and juxtaposing this against the population of key cities so that it’s comparable on a per person basis, figures 1 to 3 illustrate how Makati is easily the biggest spender.

These figures don’t yet provide any indicator on the quality of these services, nor their eventual impact on actual education, health and other social sector outcomes.

In fact, since we scaled by the number of residents, it appears that almost everything is more expensive (or excessively generous) in Makati.

By our rough estimates, if Makati will serve as the “benchmark” for total public spending in these areas for the rest of the country, then the national budget will need to increase by some 40-50%. 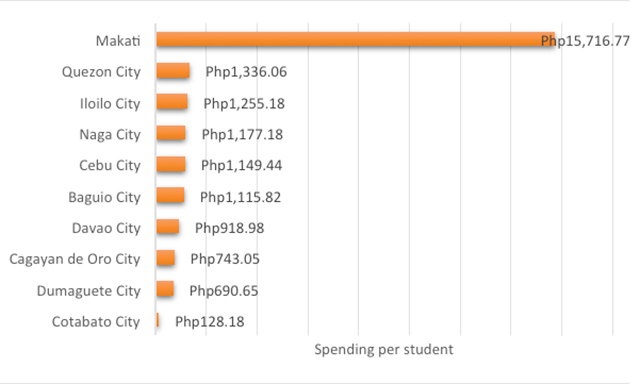 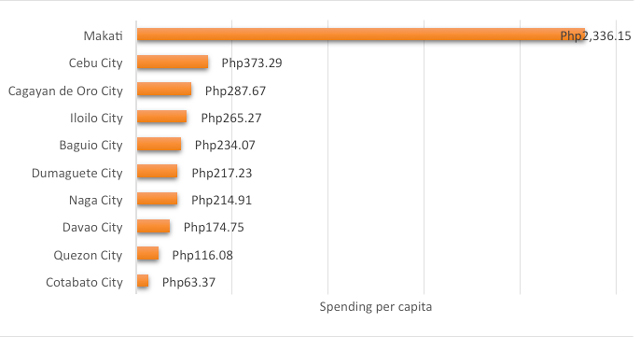 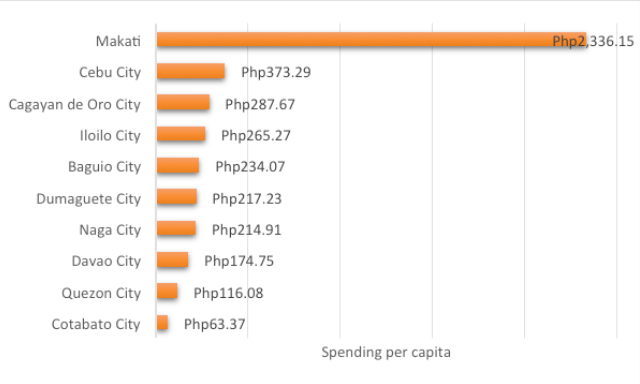 Makati can afford such spending, as figure 4 shows, because its total operating income is well over P9 billion, i.e. the sum of its tax and non-tax revenues, plus transfers from the central government. This is thrice larger than Cebu City’s and twice that of Davao City’s. 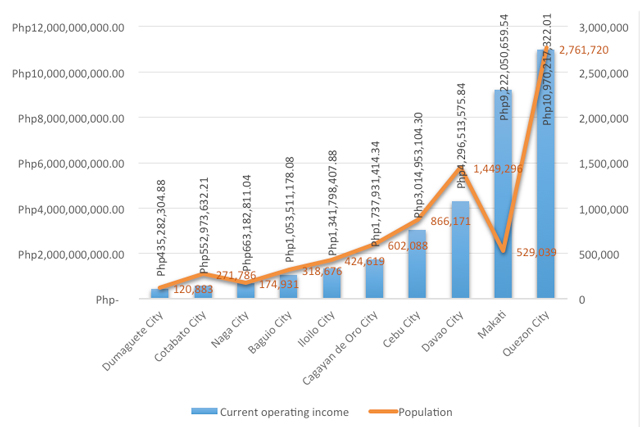 Roughly 80% of Makati’s operating income is sourced from local tax revenues, such as real property taxes and business taxes, while nearly 10% is obtained from local non-tax sources.

Hence, the city is far less reliant on the Internal Revenue Allotment (IRA) (i.e. transfers from central government to help meet necessary local expenditures) unlike the other highly urbanized cities across the country.

Makati’s strong financial position, in turn, is directly linked to the concentration of wealth in this city.

Just to illustrate: a typical house in Makati’s posh Forbes Park costing around P400 million could already generate up to P5 million in real property tax revenues based on our rough calculations. It is unlikely that many other cities will contain such a concentration of expensive properties, when compared to Makati City.

In addition, many corporations operate in the Philippine countryside, but maintain their headquarters in Makati. Just consider the over 700 corporations that constitute the influential Makati Business Club, whose business operations and staff directly contribute to the economic dynamism of Makati City. These are only among some of the businesses fueling the P5 billion in business tax revenues, on average per year, received by Makati in the past six years.

It is fair to say that the uneven economic growth across the Philippines tends to favor Makati City. That the country’s wealthy families and powerful corporations call Makati their home definitely contributes to Makati’s war chest for public spending.

This uneven growth pattern is probably something we should address rather than emulate. Spreading these resources and investments more evenly across the country is likely going to deflate part of Makati’s revenue and spending bubble—now artificially high only because of the uneven economic development in the country.

There is also the issue of what is really necessary to spend on, given the country’s overall level of development.

Makati’s spending on seniors is a case in point.

For 2015, the Department of Social Welfare and Development (DSWD) allotted close to P6 billion for its social pension allowance for indigent senior citizens, to cover the monthly P500 assistance per indigent senior citizen as mandated by law. Given an estimated 7 million seniors in the country, only 13% of the elderly enjoys this monthly stipend.

However, any senior in Makati holding its “BLU Card” for senior citizens is guaranteed an annual cash gift ranging from P1,000 to P4,000, on top of the national government’s allowance for indigent elders.

Figure 5. The Perks of being a Makati senior citizen, 2013 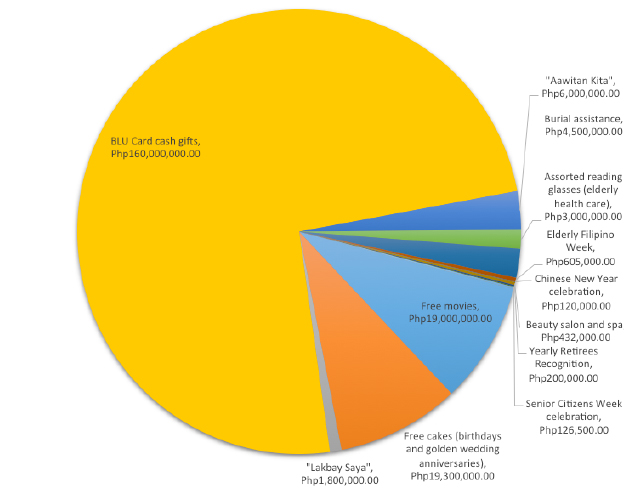 Perhaps even more to the point, Makati’s program to provide birthday cakes for seniors was budgeted at about P19 million in 2013, costing around P300 per cake. In fact, there were 61,255 “cake beneficiaries” in 2014. Makati’s budget allocation for its cake program was increased further to P22 million in 2015. Other cities can barely provide the standard entitlements for senior citizens.

If one is asked about which Philippine city to emulate, perhaps it is better to focus on cities that, in the face of many more challenges, still manage to deliver good and necessary services with far less spending.

The reality of inequality and poverty in the Philippines involves far more challenges than would be solved by free movies, spa services and cake. In addition, any economist will tell you that there is no such thing as free cake. – Rappler.com

Ron Mendoza is Associate Professor of Economics at the Asian Institute of Management and Executive Director of the AIM Policy Center. Maia Altavas is a research intern at AIM Policy Center. The article represents their views and not necessarily that of AIM.