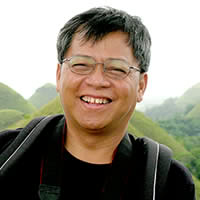 One cannot say this of the witless Vicente Sotto III (plagiarist), the public-spectacle advocate Alan Peter Cayetano, and the well-endowed legatees of the Marcos dictatorship and its minions, Ferdinand Jr and the Chiz. The jailed former defense minister had a former activist write his hagiography while his co-plotter and successor came up with a tome that diverges considerably from the way he explains matters to a listening public.

Not Iqbal. The fellow writes his own interpretation of Moro affairs and the minority group’s fraught and even hostile relationship with the Philippine state. His first book Bangsamoro, A Nation under Endless Tyranny: History of the Muslims in the Philippines is the first ever attempt to write the history of the Bangsamoro from the perspective of those fighting in their behalf. It is the Moro’s version of Jose Ma. Sison’s Philippine Society and Revolution, if you will. (A free online copy is available for the reading public at http://www.bangsamoro.org/)

The book’s reach is ambitious, going as far back as 22,000 years ago, when communities began to “migrate” into the archipelago, to the 1997 peace talks that laid the groundwork for the succeeding negotiations. Iqbal/Jubair also devotes some space to explaining why there is basis for Moros to call themselves as a nation – including placing the emergence of Moro nationalism alongside, but parallel, to that of Filipino nationalism. Here, Iqbal differs from scholars like Samuel K. Tan and even Cesar A. Majul, who argue that these two processes were intertwined with each other (hence: Filipino-Muslim struggle).

To critics that point to the absence of unity within the Bangsamoro itself, Iqbal/Jubair writes that what binds it together was “that throughout the 377 years of Spanish presence…the Moros remained unconquered.” Of the American period, however, Iqbal/Jubair hews closely to the argument by Filipino nationalists that the combination of firepower and attraction “mesmerized the minds of the Moros” with “the net result was no ‘moroizing’ (sic) the Moros but ‘filipinizing’ (sic) them in order to pave [their] integration…into one unified state once independence is granted.”

Chapter 7 is the most controversial as this is where Iqbal/Jubair lays out in a methodical manner what Filipino colonialism was all about (again, a first since Nur Misuari never even countenanced writing something similar). This and the subsequent chapters should be the concern of everyone interested in the Moro struggle, to weigh whether Iqbal’s/Jubair’s arguments have basis in fact and are convincing in themselves.

In chapter 9 we get a glimpse, an impartial one admittedly, of what the war was like, as the book narrates some of the major encounters between the warring forces. These engagements involved large numbers of forces and they were vicious. Moros, of course, bore the brunt of the war, and here we see another reason why the anti-Filipino sentiments among the Moros persisted.

My comments on the book lie in the absence of a critical view of the Moro ruling elite, the “traditional” and “modern” clans who compromised principles and came into a mutual accommodation with the Filipino state. I’ve raised this in essays written for favorite rags like Rappler and Mindanews, and in a number of occasions Iqbal/Jubair responded to these commentaries. But I found them a tad lame.

It is this nuance that is absent in this otherwise exceptional book – like his rival Misuari, Iqbal/Jubair is diffident in pointing his critical eyes at the political clans that govern the Bangsamoro, sometimes with impunity. He mentions these elites but only in the last pages of his book. And he was quite vague about them, the immediate reason being strategic: like the Moro National Liberation Front, the MILF is realistic enough to admit that it could never win its revolution without at the very least the sympathies of the Moro elite. The latter continues to hold sway over many a Moro community, can muster enough arms and men to engage both state and revolution, and possesses the wealth and the wherewithal to sustain the conflict.

But the Moro elite has also had a long record of turning its back on the rebellion. The MNLF collapsed after 1977 because Misuari could not prevent the elite from leaving the coalition and then turning against him. Manila’s power in Moro Mindanao has also remained unchallenged because it was the likes of Ali Dimaporo and, of late, the Ampatuans who remained loyal to Manila.

This leads one to muse: will the next edition of Bangsamoro engage this problem (as well as those raised by Tiglao)? Pass the proposed Bangsamoro Basic Law so Mohagher Iqbal can go back to his first love – being a historian – and thereby further enrich our knowledge of Moro history and politics. – Rappler.com