The following are excerpts from Endless Journey: A Memoir by Jose T. Almonte, former national security adviser, as told to Marites Dañguilan Vitug. The book will be launched on February 25. 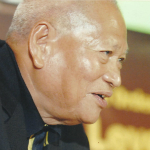 Our own fishermen had been using the Reef as a shelter and it was from them that we learned about the invasive Chinese presence. The government saw this as a grave external threat, a watershed in our relations with China.

We wanted to call international attention to China’s aggressive behavior so our Press Secretary, Hector Villanueva, organized a tour of dozens of journalists near Mischief Reef weeks after the incident. They were ferried on a Navy ship of World War II vintage, the BRP Benguet, an amphibious assault craft. Major General Carlos “Charlie” Tañega, Chief of the Western Command, guided the reporters during the five-day excursion, which included a visit to the Philippine garrison at Pag-asa Island, at the western edge of the Kalayaan group. Huey helicopters flew the reporters over the Mischief Reef, identifying the aircraft with a huge sign, “PRESS,” in masking tape.

The tour was eventful. The Asian Wall Street Journal reported a stand-off with Chinese vessels and a near-collision at sea.

Before the journalists set sail, BBC London called, saying that their foreign correspondent was part of the group. The caller wanted to know if I could assure the security of their journalist. I will guarantee their security, I replied.

Then he shifted to another topic, about China and the Philippines. “Sir, do you have an army to fight China?”

“How about your Air Force?”

“Sir, are you not the National Security Adviser?”

“How will you go to war with China?”

“That's not my problem.”

The caller, his voice showing irritation and impatience, said, “Sir, what's your problem?”

“My problem is if we go to war with China and if we win, that is my problem. Going to war is not a problem – winning is.”

I did not like the tone of the interviewer. If he did his homework, he would have known the capacity of our military. It was as if he meant to insult me. I had always been open about our inadequacies. I made a remark to other journalists that we were a David in front of a Goliath. Only this David did not even have a slingshot.

This issue was very close to my heart. I knew that it was going to be a problem for a long time.

AS THE AGGRIEVED party in the Mischief Reef occupation, we rallied ASEAN to our cause. Alarmed, the foreign ministers issued a statement expressing their “serious concern” and urged all parties to “refrain from taking actions that destabilize the region.” They pointed to the Manila Declaration of 1992, endorsed by China, in which the parties involved agreed to settle disputes over the Spratlys only through means that did not cause instability. Roberto Romulo, our Foreign Affairs Secretary, and Undersecretary Rodolfo Severino proposed that ASEAN take a concrete step by coming up with a regional code of conduct on the South China Sea that would, in effect, restrain China from flexing its muscles and encroaching into other countries’ territories.

On our own, we had to show resolve. Our plan, which was agreed upon in the security cluster, was to install lighthouses in the Scarborough Shoal. Our baseline law had yet to be passed. Putting lighthouses was a legitimate way to establish our presence and it was the least costly. We allocated about P74 million for this project. They were ready to be installed by the Transportation and Communications Department and the military. Tony Carpio, the President’s legal counsel, and I pushed for it.

However, the plan did not materialize, as we found out later. The decision to cancel it no longer passed through the security cluster, which included the foreign affairs department. Apparently, our new foreign affairs secretary, Domingo “Jun” Siazon (Romulo quit after the Flor Contemplacion scandal), convinced Ramos to discontinue it because this would anger China. Tony and I learned that Jun was nurturing plans to vie for secretary-general of the UN and that China would be an important endorser. Much later, in 2000, news reports surfaced that Jun, whom President Estrada kept as foreign affairs secretary, was aiming to compete for the prized UN post after Kofi Annan’s term.

This was the only time that Ramos didn’t follow our recommendation – and on a very critical issue. We missed an opportunity. I no longer talked to the President about it. He had made a decision and it was not for me to question him. But even without the lighthouses, which were going to be our markers, we continued to put the issue in the agenda of the ASEAN and the domestic and international media to mobilize world opinion to help us.

WHAT WAS VERY important in understanding our row with China was how this Asian giant thought. For them, the South China Sea was an integral part of their ambition to be a superpower. They were claiming more than 80 percent of the 3.5 million square kilometers of the South China Sea and all the formations in them. Twice, China had used force, in 1974 and 1988, to enforce this sweeping claim, on both occasions against Vietnam.

I took the position that we could never convince China by diplomacy or whatever means to relinquish its claim because that would be practically asking them to forego their ambition. We recognized this during Ramos’s time and the president and I had discussed this. I had often talked about China’s worldview in our security cluster meetings and cautioned our government officials about believing China’s assurances of negotiating their competing claim. No amount of diplomacy would work. Of course, China would negotiate, but they would not consider what we wanted. Mine was not the dominant view in the Cabinet. But I knew that we had to continue dealing with China on a bilateral basis.

I’ve said this often but it seems that only a few in the Philippine media and policy circles have picked it up: the South China Sea is the maritime heartland of Southeast Asia. Anyone who occupies a heartland will control the periphery and eventually influence the entire Indian Ocean and the Western Pacific as well as the sealanes of communication between the Middle East’s oil and the industrial countries of Northeast Asia. If China controls the South China Sea, it will lead to its control of all the countries in the area: the Philippines, Vietnam, Malaysia, Indonesia, and adjacent countries in the inland Southeast Asia, Laos, and Cambodia.

Our strategy should be not to depend on any power. We need to ensure over time that we become self-reliant. As a country, we have to cultivate our internal strength to face up to the challenge posed by China and deal equitably with the two powers in the region, the US and China. America does not occupy any islet in the South China Sea; it is not a threat to us. Of course, America is our former colonizer, but that era is finished. The new colonizer, China, is whom we are confronting. – Rappler.com