[ANALYSIS] Bayanihan 2 is here, yet it’s too small, too late 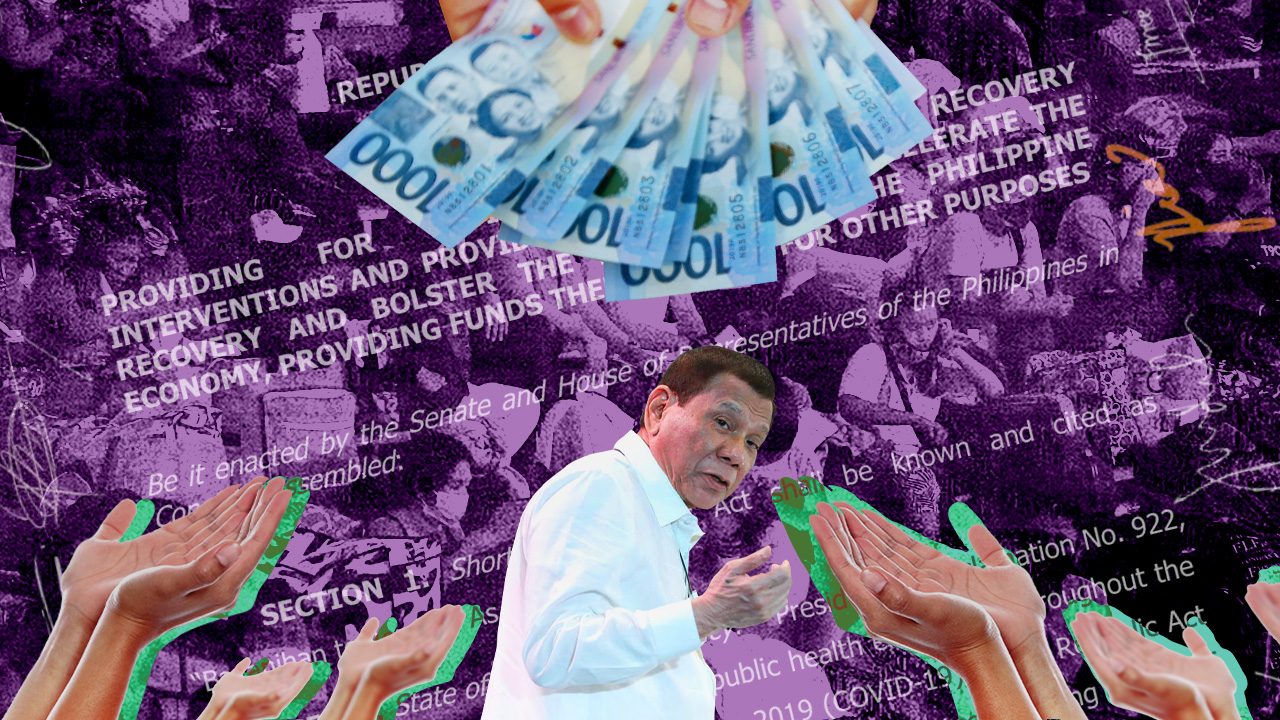 After grueling debates, on Thursday, August 20, Congress finally harmonized its two versions of the Bayanihan to Recover as One Act (aka Bayanihan 2).

It’s supposed to be a spending plan to finance the government’s continuing COVID-19 response, as well as abate the economic catastrophe we’re mired in.

In some ways, the final version of Bayanihan 2 is an improvement over its earlier versions, as well as Bayanihan 1.

For instance, Congress is now explicitly allocating funds for specific budget items rather than allowing President Rodrigo Duterte to do whatever he pleases with the 2019 and 2020 budgets at his disposal.

Duterte is also required to make more detailed monthly reports to Congress and the Commission on Audit on their targets versus achievements, how exactly funds are spent, and the terms and conditions of new loans.

But relative to the magnitude of the crises we’re facing, Bayanihan 2 is still, sad to say, peanuts.

Sure, it’s better than nothing. But Filipinos need a lot more than what government is offering on the table.

Figure 1 shows a breakdown of what’s in store in Bayanihan 2, which involves an aid package totaling P165.5 billion. Let’s focus on the biggest budget items.

The idea is to infuse these institutions with money to induce them to lend to firms – especially micro, small, and medium enterprises – that are struggling to survive amid the country’s deepest recession on record. (READ: End of growth: How the pandemic ruined PH economy beyond recognition)

Originally, Duterte’s economic managers and friends in Congress wanted to aid firms by setting up a supercorporation called ARISE Inc.

But many feared that this new holding company could funnel aid to select corporations, at the expense of smaller firms which need help much more.

Thankfully, plans for ARISE Inc. have been shelved – at least for the moment. Still, provisions that threaten to compromise the country’s competition landscape – and greatly enfeeble the Philippine Competition Commission – have unsettlingly pushed through.

Second, there is a huge P25.5 billion “stand-by fund” to be spent on COVID-19 medicines and vaccines, as well as further infusions of money for the LBP and DBP – but only in the event that government can find additional revenue sources.

Third, P24 billion will be spent on the Department of Agriculture’s cash and loan interest rate subsidies for farmers and fisherfolk, as well as for the Plant, Plant, Plant program.

Note that the agriculture sector actually grew in the second quarter, defying the recession that has otherwise crippled the rest of the economy. Yet agriculture is receiving one of the biggest allocations in Bayanihan 2.

Fourth, government is giving only P13.5 billion for the hiring and compensation of health care workers and the augmentation of our government hospitals.

This feels terribly small given the widespread suffering of our health workers and the fact that our healthcare infrastructure has already been brought to its knees, and will continue to be so indefinitely.

Fifth, P9.5 billion will be spent on the Department of Transportation’s programs. Again, this is too small: the House had originally planned to allocate P21 billion, and the Senate P17 billion.

Sixth, P6 billion will go to the Department of Social Welfare and Development’s various aid programs, including emergency subsidies for poor households.

But this time around, only households in “granular lockdowns” will get such aid, and the total amount is a far cry from the P200 billion of subsidies exclusively allocated by Bayanihan 1 for April and May. There’s been no follow-up to those emergency subsidies.

I don’t have space here to go through the rest. But I’ll just add that aid for tourism – one of the sectors hurt most by the pandemic – is also paltry. They’re receiving just P4 billion in direct aid, whereas lawmakers originally pushed for P10 billion.

Good though its intentions are, Bayanihan 2 is too small. It’s not nearly enough to shore up our embattled economy.

Figure 2 shows that Bayanihan 2’s P165.5 billion (although seemingly large) actually pales in comparison with the estimated economic losses in the second quarter of this year, which totaled P707 billion.

Bayanihan 2 is even more puny compared with the P1.3 trillion economic rescue plan called ARISE Philippines earlier proposed by some lawmakers in the House of Representatives.

Why is Bayanihan 2 so small?

First, many lawmakers wholeheartedly believe Duterte’s economic managers – led by Finance Secretary Carlos Dominguez III – when they say we can’t afford to splurge on economic aid, lest our debt figures balloon and our credit ratings suffer.

But this fiscal conservatism is misguided.

Although the country’s debt-to-GDP ratio has climbed to 48.1% by end of June, borrowing is justified if it means saving people’s jobs and livelihoods. (READ: Why Duterte’s ‘Bayanihan 2’ goes against the bayanihan spirit)

Second, the economic managers are pinning their hopes on so-called “multiplier effects”: a peso spent on business loans for companies, for instance, will supposedly generate P8 to P10 in economic activity. By this logic, government need not splurge.

But until now we haven’t seen any government study backing up this claim. Rather than create jobs or innovate, many firms receiving such loans might just use the proceeds to pay off debts they’ve accumulated in past months – hence diminishing the purported multiplier effects.

Third, the Department of Finance came up with a graphic supposedly showing that a bigger stimulus need not revive the economy.

Aside from the fact it’s rather disingenuous to compare our situation with the United Kingdom and Sweden, it’s also unfair to expect growth to pick up so easily on account of aggressive fiscal spending.

After all, the point is not so much to stimulate the economy now but to give aid to people and help them weather this pandemic. Recovery will only happen once it’s truly safe to open up the economy.

Unfortunately, government has put us in a situation where future lockdowns seem to be necessary. (READ: Had Duterte acted earlier, PH economy would be safe to open by now)

Unwillingness to spend on aid—as can be gleaned by Bayanihan 2’s diminutiveness—only lays bare the government’s gross indifference to the sorry plight of our people.

Finally, you might say Bayanihan 2 also comes a tad too late.

For instance, it allocates P5 billion for the hiring of contact tracers, P9 billion for the expansion of hospital capacity and the construction of temporary medical isolation and quarantine facilities, and P3 billion for the procurement of PPEs, face masks, face shields, and shoe covers.

These are things that should have been provided for as early as February or March – not now in late August.

At the same time, government is pouring about P55 billion into business loans and P13 billion into cash-for-work and other jobs programs. But as of June, 26% or more than a quarter of businesses have already closed operations. Over 27 million workers (or nearly half of all adult workers) were already jobless by July.

To mitigate the economic damage wrought by the pandemic, Congress should have convened much earlier so that Bayanihan 2 could be set in motion right after Bayanihan 1 expired on June 24.

But the gap between the expiry of Bayanihan 1 and the approval of Bayanihan 2 is an unacceptably long 57 days.

We often talk about the complacency and negligence of President Duterte and his cabinet in fighting the pandemic. But perhaps we should also talk about congressional leaders’ slow action and glaring lack of urgency.

By the lateness of their actions, they, too, unwittingly exacerbated the recession as well as Filipinos’ suffering. – Rappler.com