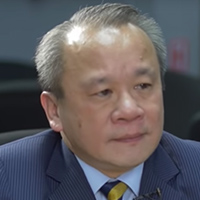 The Sandiganbayan never said so.

In its decision handed down on Friday, December 7, the First Division, quite artfully, wrote in its dispositive portion:

WHEREFORE, in light of all the foregoing, judgment is hereby rendered finding Richard A. Cambe, and Janet Lim Napoles GUILTY beyond reasonable doubt of the crime of Plunder, defined and penalized under Section 2 of Republic Act No. 7080, and are hereby sentenced to suffer the penalty of reclusion perpetua, with perpetual absolute disqualification to hold any public office.

For failure of the prosecution to establish beyond reasonable doubt that accused Ramon “Bong” Revilla, Jr. received, directly or indirectly (sic) the rebates, commission (sic), and kickbacks from his PDAF, the Court cannot hold him liable for the crime of plunder. Accordingly, he is ACQUITTED. (Additional emphasis added)

Moreover, in view of the discussion above, and pursuant to Article 100 of the Revised Penal Code, accused are held solidarily and jointly liable to return to the National Treasury the amount of One Hundred Twenty-Four Million, Five Hundred Thousand Pesos (P124,500,000.00).

Let’s take a Deep Dive into two parts of the Decision – the language of the acquittal of Revilla and the imposition of civil liability against all accused.

Not liable but not innocent

Under Rule 120, section 2 of the Rules of Court, if the judgment is acquittal, “it shall state whether the evidence of the prosecution absolutely failed to prove the guilt of the accused or merely failed to prove his guilt beyond reasonable doubt. In either case, the judgment shall determine if the act or omission from which the civil liability might arise did not exist.”

In acquitting Revilla, the court simply cited the “failure of the prosecution to establish beyond reasonable doubt” his guilt for plunder. It did not use the words “absolutely failed”; nor did it state in the judgment nor the body that the act from which the civil liability might arise did not exist. To the contrary, the court found the “accused…solidarily and jointly liable to return to the national treasury” the amount of P124,500,000.00.

Why is this significant? In Manantan v. Court of Appeals, G.R. No. 107125, January 29, 2001, the Supreme Court explained the two kinds of acquittal recognized in our jurisdiction, including the different effects thereof on the civil liability of the accused, thus:

There being no delict, civil liability ex delicto is out of the question, and the civil action, if any, which may be instituted must be based on grounds other than the delict complained of. This is the situation contemplated in Rule 111 of the Rules of Court.

And in Dayap v. Sendiong, G.R. No. 177960, January 29, 2009, the Court enumerated the instances where the acquittal of an accused in a criminal case does not ipso facto result in his or her release from civil liability to the other party:

The language of Revilla’s acquittal thus bears directly on the civil liability that has been assessed against the accused. Because the court did not find him innocent, as it did not say that the prosecution absolutely failed to prove his guilt beyond a reasonable doubt, there clearly was basis for the court to award civil liability, which would require a lower quantum of evidence (only a preponderance of the evidence).

Is there a significance to the court’s use of the collective term “accused” without naming any one of them?

Yes. In the first paragraph of the dispositive portion, the accused are named, i.e., “Richard A. Cambe, and Janet Lim Napoles.” In the second, the court characterized Revilla still as “accused” even as it acquitted him. Thus, when the court wanted to refer to any of the specific accused, it named them. In the third paragraph, the court used the collective “accused” without naming them. Clearly, the collective “accused” is intended to refer to the accused in the first paragraph, Cambe and Napoles, and the accused in the second paragraph, Revilla.

Had the court wanted to exclude Revilla from civil liability, it would have been quite simple to simply name Cambe and Napoles, as it did in the first paragraph; that it did not, creates a presumption that it meant to include all the accused.

What are the remedies available?

For Cambe and Napoles, both of whom were convicted and sentenced to reclusion perpetua – a prison term of 20 years and one day to 40 years that is not to be confused with life imprisonment, which has no definite duration other than that fixed by the statute providing for it – their remedy is to appeal the judgment of conviction.

Under Rule XI, Section 1, 2018 Sandiganbayan Internal Rules, the appeal to the Supreme Court in criminal cases decided by the Sandiganbayan in the exercise of its original jurisdiction shall be by notice of appeal filed with the Sandiganbayan and by serving a copy thereof upon the adverse party.

For the prosecution, the People cannot appeal from the acquittal of Revilla as it would violate the guarantee against double jeopardy under the 1987 Constitution. The only remedy left to the prosecution, should it disagree with the acquittal, is to file a special civil action for certiorari alleging that the Sandiganbayan acted with grave abuse of discretion amounting to lack or excess of its jurisdiction in acquitting Revilla. This has only been successfully done only on one occasion and under a very specific context.

In Galman v. Sandiganbayan, G.R. No. 72670, September 12, 1986, the Supreme Court allowed a second motion for reconsideration in a previously denied petition for certiorari challenging the acquittal of the accused in the assassination of former senator Benigno S. Aquino Jr.

The specific context was the information received after the departure of Ferdinand Marcos and family in the wake of the EDSA People Power revolt that Marcos had ordered the Sandiganbayan justices to acquit the accused, thus resulting in the original trial being a sham.

The Court ruled that the machinations to acquit the accused resulted in a deprivation of the State’s right to due process and voided the proceedings, including the judgment of acquittal. The Court expressly ruled that double jeopardy would not bar the re-trial as the guarantee presupposed a valid trial, not a sham proceeding.

As may be seen, challenging the acquittal of Revilla would require a very specific set of allegations and a heavy burden of proof on the part of the People, to be represented by the Solicitor General as counsel of the Republic in proceedings before the Supreme Court. No less than proof that the trial was vitiated by corruption, as in the case of Galman, would suffice to void the judgment. In the absence of any such proof, “grave abuse of discretion” might be a heavy bar to hurdle.

For Revilla, his remedy against the imposition of civil liability would be to ask for reconsideration or clarification. Because the Sandiganbayan did not provide any factual or legal basis for the award, all the accused (Revilla, Cambe, and Napoles) can actually challenge the award as to its basis. Revilla’s counsel has already said as much.

Going back to the original question: Is Revilla innocent?

With his acquittal, the legal answer is that he cannot be held liable. History, however, has yet to weigh in. – Rappler.com