[Newsstand] The Filipino as cross-voter 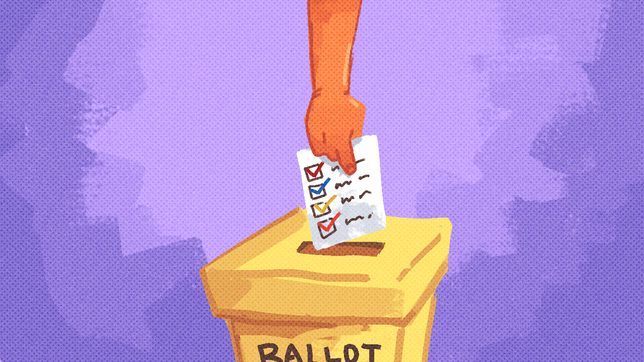 Facebook Twitter Copy URL
Copied
Who are the cross-voters who voted for Duterte and Robredo in 2016? The most prominent is former president Fidel Ramos.

The polarized nature of much of public discourse these days suggests that political alignments are self-contained, separated from one another in colored silos: red, yellow, orange, white. But in fact the practice of cross-voting, understood not strictly but analogically, is common – so common that millions of voters do it.

Cross-voting is when a member of one party votes for another party. Very few Filipino voters identify as party members, so the borrowed concept is applicable to this common practice only by analogy. Take a look, for instance, at the highlights of the Social Weather Stations (SWS) 2016 exit poll.

“The voters of 2016 ignored the pairings of the candidates even more than in earlier elections,” SWS’s Mahar Mangahas wrote soon after the elections. “As of 2 am on May 10, when the 2016 exit poll sample had reached 62,485 voters from 785 of the 802 VCs [voting centers], the [Rodrigo] Duterte vote percentage had reached 40 points, for a 16-point lead over [Mar] Roxas. Of his 40 points, only 13 came from voters of his cocandidate [Allan Peter] Cayetano; the bulk of 18 came from [Bongbong] Marcos voters, and another 6 were from [Leni] Robredo voters.”

In other words, some 15% of Duterte’s 16.6 million voters voted for Robredo as vice president. That’s almost 2.5 million votes. An astounding number, and given the trolling, turmoil, and tragedy that have overcome public discourse the last five years, somewhat difficult to wrap our heads around.

When a Duterte critic vilifies Duterte’s “16 million” voters – for instance, when she calls them “stupid” or “bobotante” – does she realize the number includes a great many Robredo supporters? And when a Duterte diehard sneers at the “dilawan,” does he realize that millions of those very same yellows helped Duterte become president? As social media has taught many of us to say: It’s complicated.

Who are the cross-voters who voted for Duterte and Robredo in 2016?

The most prominent is former president Fidel Ramos. Before the election, on the sidelines of an event honoring Ambassador Rodolfo Severino, he cheerily told us he was voting Ro-Ro (pause for dramatic effect, to let the possibility of a vote for Mar ROxas and Leni RObredo sink in), then explained he actually meant ROdrigo and RObredo.

Why did Ramos vote for Duterte? He was the first national leader to sense the Davao mayor’s potential as a national politician, appointed him Cabinet officer for the region, and encouraged him, back in the 1990s, to consider running for president. I assume he felt a sense of responsibility, then; he had planted that particular seed in the mayor’s mind. But he must have also felt a sense of possibility; he had urged Duterte, in a large public meeting, to run for president precisely as the first candidate from Mindanao. (President Duterte acknowledged this personal debt to Ramos with the first words he spoke at his inaugural.)

It has since become clear that the seed of ambition in Duterte’s mind has grown into a monstrous weed of avarice and incompetence in our lives; to mark Duterte’s 100th day in office, in October 2016, Ramos wrote a blistering commentary that described the country as “losing badly” and Duterte as needing to transform himself “from a mere provincial official to a capable international player at the head of 101,000,000 multicultured Filipinos.” Regret, as always, comes too late. And to think that was over 1,800 days ago; the weed has since grown so wildly we are choking on it.

Who were the other Duterte-Robredo voters? I would guess that a good number live in Mindanao. Duterte topped all 6 regions in Mindanao, amassing 6.1 million votes. Robredo topped the vice-presidential contest in 4 regions; her vote total from all of Mindanao was a little under 3 million. It would make practical sense to assume that there was an overlap of voters, especially because Duterte’s share of the vote in each region, except for the Zamboanga peninsula, was well over 50%. (In the Davao region, it was almost 90%.) In the Autonomous Region of Muslim Mindanao, there was even an obvious overlap: Duterte won 65.72% of the vote, while Robredo won 44.28%.

Why did they, and others like them in other areas, vote for the anti-administration presidential candidate and the administration’s vice-presidential nominee? I am not aware of any research that studied cross-voting in 2016, but I can’t be the only one who thinks that would make fascinating reading.

Ramos’ version of Ro-Ro wasn’t the only cross-voting that took place. Using the estimates from the SWS exit poll, we can extrapolate that about 7.5 million of Duterte’s votes came from Marcos (whose presidential running mate, of course, was Miriam Defensor Santiago). Duterte’s own running mate, Cayetano, contributed about 5.4 million votes.

Cayetano himself, in his run for the vice presidency, received 5.9 million votes, and he played his role as running mate to the hilt: Over 90% of his supporters also supported Duterte.

Marcos, on the other hand, received 14.1 million votes. That suggests that over half of his supporters also supported Duterte; about 6.6 million of his voters voted for someone else. Who did they support?

The exit poll data shows that half of Santiago’s 1.5 million votes, half of Jojo Binay’s 5.4 million votes, and a third of Grace Poe’s 9.1 million votes came from those who voted for Marcos as vice president. This suggests that, in 2016, Marcos’ appeal was broader than simply anti-administration or (secretly, winkingly) pro-Duterte.

As for Poe, her votes were evenly split three ways, among supporters of Marcos, Robredo, and her running mate Chiz Escudero.

That means about 3 million Poe voters (and, from another data point, over 700,000 Binay voters) joined some 2.5 million Duterte voters in supporting Robredo.

These are 2016 numbers, and only exit poll data at that. And, to be sure, in the last five years organized disinformation campaigns have only worsened the polarization of public discourse.

But these voting alignments should remind us, now that the election season has started in earnest, that voters are dynamic, differently motivated, complicated. They are, to borrow Ramos’s term, multicultured. – Rappler.com