[ANALYSIS] How big was the Pasig Emerald Avenue rally? Facebook Twitter Copy URL
Copied
'Journalists should be the guardians of accuracy in the matter of crowd estimation, and they can do this if they go the extra mile in the interests of responsible reporting'

As we head into the homestretch of this election campaign, we are regaled by the contest of who gets the bigger crowds at their rallies all over the country, mainly between BBM loyalists and Leni-Kiko supporters.

The organizers tout the sizes of their audiences everywhere. Of course, they exaggerate to impress supporters as well as rivals. How accurate are the organizers’ claims? Nobody really knows. Not even the journalists who just lazily report the claims of the organizers.

Do accurate estimates of crowds at public events really matter? I think they do in the interests of accuracy, truth, and history. Also for journalistic integrity, if we still care about our profession. The way I look at it, our journalists today just take the lazy road by reporting what the organizers claim.

Take the estimate for the 1995 crowd at Pope John Paul II’s World Youth Day mass in the Philippines. It was put at 5 million and recognized by the Guinness Book of Records. This crowd estimate was never challenged and now it is part of history, although many today think it was exaggerated. Journalists should be the guardians of accuracy in the matter of crowd estimation, and they can do this if they go the extra mile in the interests of responsible reporting. To get credible crowd estimates, journalists can follow a “science” in estimating crowds, if we define science as being accurate, precise, and systematic. So how does this “science” work? Experts suggest the following steps:

1. Start by answering some basic questions. Find out the size of the space where the event is held. Just Google for the information from official documents. How many square meters does it occupy? Use Google Earth. Then ask yourself: What proportion of the space is occupied? Is it 100%, 75%, 50%?

2. Next, apply the Jacobs formula. University of California journalism professor Herbert Jacobs designed the formula in the 1960s during the Vietnam War protests.

He counted the students that conducted almost daily protests on the university campus just outside his office window. Since the campus was arranged in a grid, Jacobs counted students in a few squares. He computed the average number of students per square, then multiplied that by the total squares. 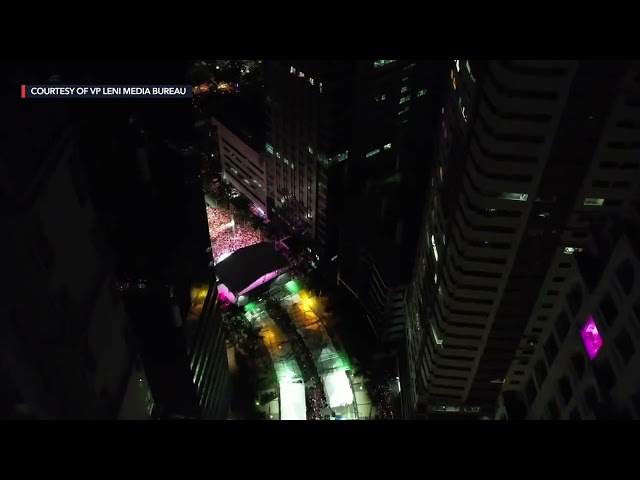 Let us apply these steps to estimate the crowd at the Kakampink Pasig Rally on March 20 on Emerald Avenue. The estimates ranged from 70,000 to 170,000, depending on who was making them. What do we think was really the size of that crowd? We can arrive at the figure systematically.

First, let’s establish how big the area covered by the rally is by Googling the size of Emerald Avenue, where the bulk of the crowd was. How wide and how long is the avenue? We can find out by using Google Earth. Even better, get an expert to help. According to Pastor Amor Alvarez who lives right on Emerald Ave., the avenue is 590 meters long. If we multiply this by its width of 30 meters, we come up with 17,700 square meters. Plus the area of the two sidewalks of 4,720 square meters, we come up with 22,420 square meters.

Finally, to arrive at the crowd size, multiply area in square meters by density. Since the crowd was very dense, we multiply the total area of street and sidewalks, or 22,420 square meters, by 4, and we have 89,680 people. If we add an estimated 20,000 people max that spilled over that night to Julia Vargas Avenue in the south and Garnet Road in the north, according to my good friend Charlie Agatep, we will have a safe maximum estimate of 109,680 at that Pasig rally. Give or take 1,000. – Rappler.com

Crispin Maslog is a former journalist with Agence France-Presse and science journalism professor at Silliman University and University of the Philippines Los Baños. He is now Chair of the Board, Asian Media Information and Communication Centre, based in Manila.