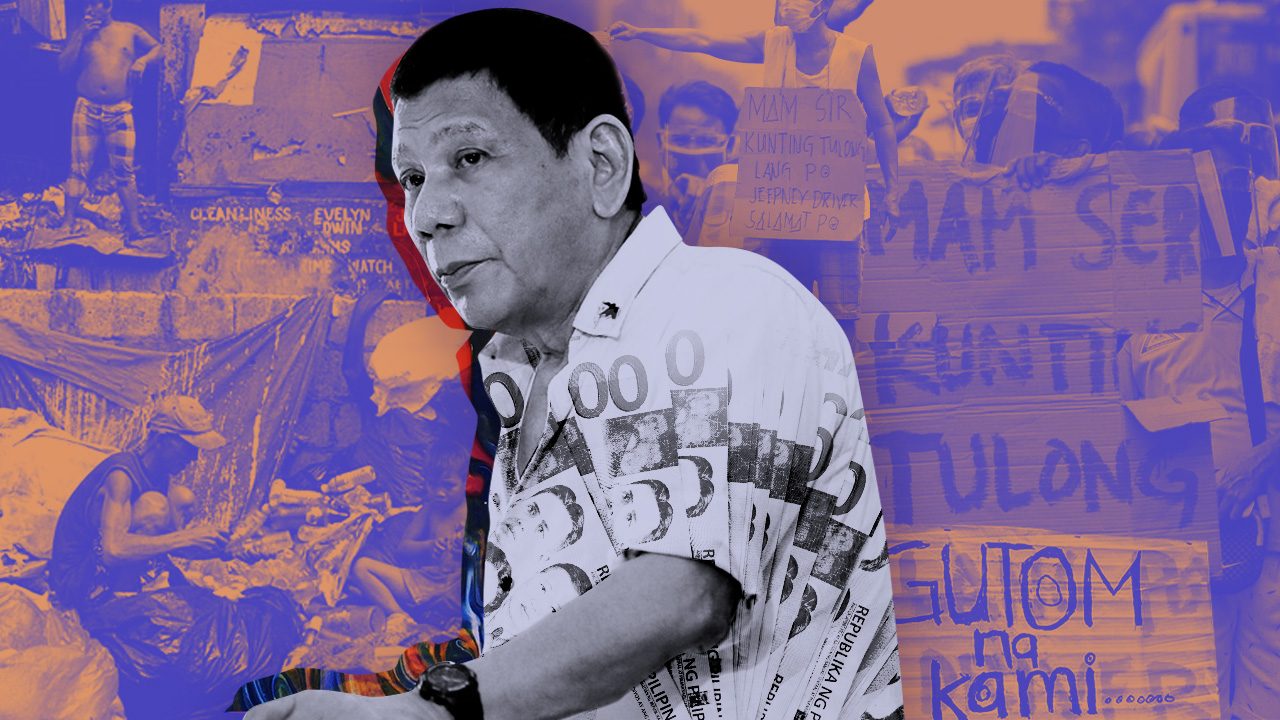 Facebook Twitter Copy URL
Copied
'Regardless of the President’s political spin and rhetorical bravado, a compelling fact remains: life is not good for many Filipinos'

Last week, the Ateneo School of Government released its first working paper for “Duterte at 5,” a series that assesses different areas of governance including economic policy, legislative reforms, and crime and corruption. In that first report, we focused on social development reforms. While the report speaks for itself, we would like to use this space to reiterate some of our salient points especially on poverty and hunger.

Social development is a pillar of Duterte’s administration. The reduction of social inequality is clearly enshrined in the Philippine Development Plan 2017-2022.

And in its Kasama sa Pamana pre-SONA report, rolled out in different regions in the first half of 2021, the administration applauds its accomplishments in combating hunger and ensuring food accessibility. To be sure, poverty incidence in the past two decades has been steadily declining. During the administration of President Benigno Aquino III, poverty levels fell from 26.3% in 2009 (a year before the start of his administration) to 23.5% in 2015. At the time, this was the lowest poverty rate that the Philippines had seen since 2003 — when the poverty rate was 24.9%.

During the administration of President Duterte (which started in 2016), poverty dipped even further to 16.7% in 2018. This means that at least before the pandemic, only 16.7% of Filipinos lived below the poverty threshold, which, according to PSA, is set at P10,727.00.

Relying on official government data, one can assert that the poverty situation in the Philippines has been steadily improving.

But this claim needs to be interrogated. One way of doing this is by comparing it to self-rated poverty.

This affords observers a “bottom-up perspective on poverty,” which is meaningful insofar as it reveals how ordinary people experience their own socioeconomic conditions. Specifically, respondents are asked to categorize their respective households as poor, borderline poor, or not poor.

Like poverty incidence, self-rated poverty had been generally declining since the 1980s. But the past five years have shown some signs of reversal. Interestingly, the lowest annual average was recorded at 44% (of Filipino households) in 2016, the year Duterte won the elections. The figure crawled back up to 46% in 2017 and then 48% in 2018 before sliding down to 45% in 2019.

The latest figures from SWS reveal that now 49% of Filipino families consider themselves poor. Only 17% do not. An upward trend, in other words, characterizes self-rated poverty under Duterte’s presidency.

On average, these Filipino families also estimate that they need an extra P5,000.00 to make ends meet.

[ANALYSIS] There is nothing to gain from ignoring bad numbers Closely related to self-rated poverty is the experience of hunger among Filipino households.

While the government claims that it is well on its way to achieving zero hunger, it admits too that the pandemic has arrested the entire effort. Over the weekend, Cabinet Secretary Karlo Nograles, who is also the chair of the Inter-Agency Task Force on Zero Hunger, recognized the situation. In a press statement, he claimed that “there is growing evidence that tells us that the government should stay the course in its programs while stepping up efforts to stamp out hunger.”

Which households went hungry? Disaggregating the data according to region is helpful to discern patterns.

But by 2020, the figure was completely unfavorable for both Visayas (24.2%) and Mindanao (25.5%), regions that were also the worst hit in terms of self-rated poverty.

Furthermore, the latest figures from SWS reveal that 32% of Filipino families believe that they are poor given the type of food that they eat. 45% consider themselves borderline food-poor, a situation that belies any claim that Filipinos are better off five years since Duterte took over.

At the end of 2019, according to SWS, 82% of Filipinos were satisfied with Duterte’s performance as president. Only 10% were not.

A year later, Pulse Asia’s figures were not any less controversial. In the middle of the pandemic, 91% of Filipinos gave him their approval.

If there is any lesson to be learned from recent studies on leadership satisfaction, it is that the popularity of an administration is not necessarily tied to the state of the economy. Especially in recent years, evidence points to herd behavior and disinformation as potential factors.

In the final analysis, President Duterte did not use his political capital where it is supposed to matter: in the everyday lives of Filipinos.

Duterte fails to use popularity to improve Filipinos’ lives – experts The story of President Duterte is thus the story of misused and wasted political capital. Regardless of the President’s political spin and rhetorical bravado, a compelling fact remains: life is not good for many Filipinos.

The May 2022 elections will likely serve as a referendum on Duterte’s performance in social development and his response to COVID-19. In other parts of the world, particularly in Taiwan, South Korea, and New Zealand, citizens have rewarded their government’s responsiveness to people’s needs.

But could the inverse also be true? In the context of the Philippines, will citizens sanction governments that are unable to protect them against poverty and hunger? Will they punish leaders who prioritize self-serving gains over social goals?

Or will bad decisions — and bad behavior — be rewarded? – Rappler.com

Jayeel Cornelio, PhD is the Director of the Development Studies Program at the Ateneo de Manila University. He conducts research on youth exclusion and religious change.