[ANALYSIS] Why you should be alarmed by Duterte’s 2021 budget 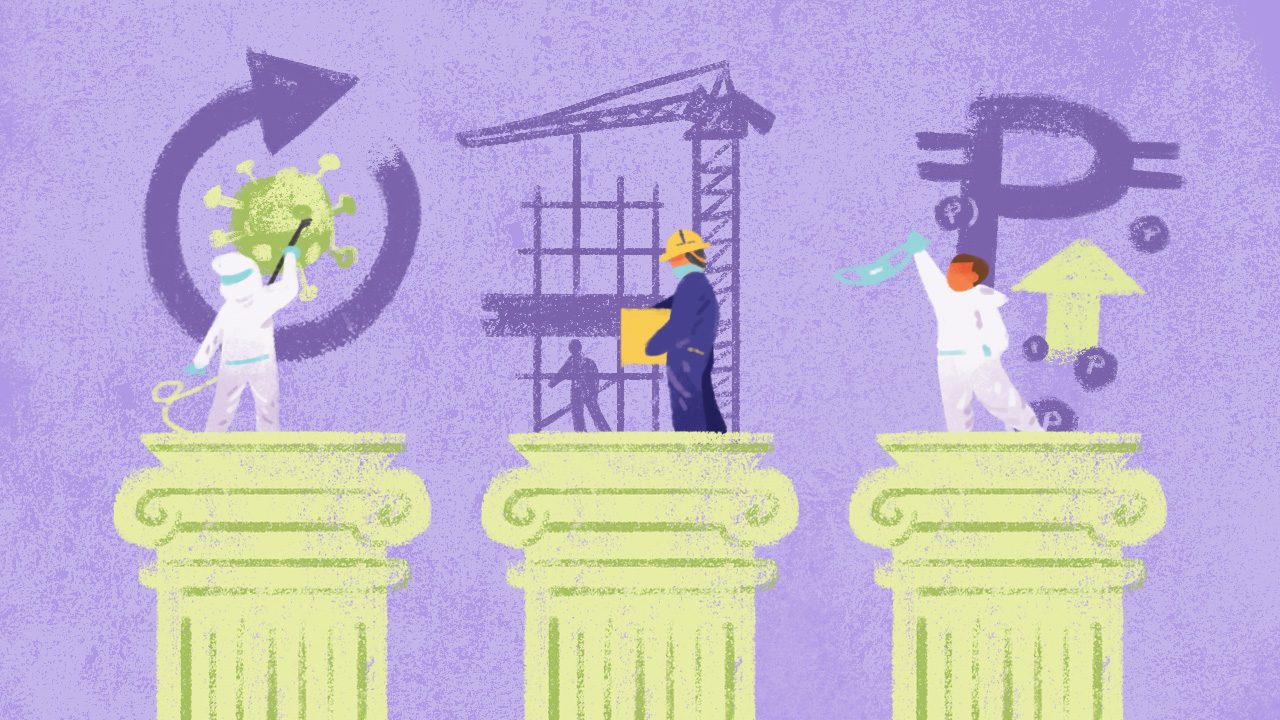 This could be Duterte’s worst budget proposal yet.

We can’t emphasize enough how crucial next year’s budget will be.

With the pandemic likely to rage on next year, the budget should authorize much-needed funds for the government’s continued pandemic response, as well as a decent stream of economic aid for our people. The budget should also fund various adaptations to the so-called “new normal,” especially in certain sectors like transportation and education.

On the face of it, the proposed 2021 budget looks decent enough. At P4.506 trillion, it’s 10% larger than this year’s P4.1 trillion budget. It also rests on 3 pillars: “Reset” (responding to the pandemic), “Rebound” (reviving infrastructure development), and “Recover” (adapting to the post-pandemic life).

But upon closer inspection, the proposed 2021 budget is, in fact, a badly crafted budget.

Although it does provide some additional funds to address the pandemic head on, these sums are paltry compared with the extent of the health crisis we’re facing. Key aspects of the health sector will in fact be defunded.

Meanwhile, amid large-scale economic suffering, a bulk of the budget increases won’t go to much-needed economic aid or adaptation measures. Instead, they will go to less urgent concerns such as big-ticket infrastructure projects as well as President Rodrigo Duterte’s pet law enforcement projects concerning communist armed groups and illegal drugs.

The proposed budget also talks about a “post-pandemic life,” reflecting Duterte’s misleading, toxic assumption that a vaccine will soon be discovered and magically sweep away our problems next year.

Riddled by perverse priorities and misguided by a false sense of hope, the 2021 budget in its current form threatens to underfund, enfeeble, or even derail the government’s pandemic response next year.

Rather than mitigate Filipinos’ collective misery, government stands to deepen and prolong it.

1. Fixation on infrastructure, not health

Amid a global pandemic, you’d think health spending will get the biggest budget boost next year. But you’d be wrong.

Table 1 shows that the budget of the Department of Health (DOH) will actually go down to P131 billion next year from this year’s P181 billion. (Throughout this piece, we’ll be combining 2020 budget allocations and realignments or additional budgets from Bayanihan 1 and Bayanihan 2.)

There will no longer be significant allocations for personal protective equipment (PPE) and testing kits. Funding for doctors, nurses, midwives, and other healthcare workers deployed to unserved and underserved areas — subsumed under Human Resources for Health Deployment — will also be slashed by about two-thirds relative to this year.

What’s more, no significant budget increases will go into epidemiology and surveillance, quarantine and international health surveillance, national reference laboratories, and local health systems. The budget for health information technology was also slashed to a mere 8% of its 2020 level.

Only P2.5 billion was allotted for the COVID-19 vaccine next year. This is peanuts. Assuming a vaccine is successfully discovered, to be effective at all it will need to be administered to a vast majority of Filipinos. This will require considerably more funds for importation, mass production, and distribution.

Simply put, right smack in the middle of a global pandemic, the Duterte government is planning to underfund critical aspects of our healthcare system.

Rather than buttress our country’s flagging healthcare system, the Duterte government is keener on funneling additional funds into infrastructure, of all things.

As it happens, Duterte’s economic managers are stubbornly wedded to the belief that infrastructure can singlehandedly deliver us from this economic rut. However, for various reasons, this is a false belief. (READ: Why we can’t Build, Build, Build our way out of this pandemic)

Even as it pours money into big-ticket infrastructure, the 2021 budget actually neglects to fund smaller infrastructure that are key in this pandemic, including protected bike lanes, sidewalks, and bus rapid transits.

Bayanihan 2 does a better job at this; it even provides aid for displaced public utility drivers through service contracting. But Bayanihan 2’s allocations are good only until December this year. We need to see similar allocations in the 2021 budget.

2. Not enough aid for Filipinos

Alarmingly, the proposed 2021 budget slashes much-needed funds for economic aid. This, at a time when economic misery is at a record high.

While other countries are doubling down on the provision of cash transfers for poor households and loans for small businesses, Duterte’s economic managers are going the opposite way by severely cutting aid budgets. (READ: Filipinos are in misery, but why is Duterte slashing economic aid?)

For starters, the Department of Social Welfare and Development’s budget will be more than halved next year (Table 3), mainly because there will be no succeeding waves of emergency subsidies for poor households, following those given through Bayanihan 1 for April and May.

Cash transfers next year will be limited to the existing beneficiaries of the Pantawid Pamilyang Pilipino Program (4Ps) and the Social Pension for Indigent Senior Citizens. But even they won’t be receiving much larger transfers.

The Department of Labor and Employment will also have less assistance to give out to displaced workers and repatriated OFWs next year. There’s only a marginal increase for the Overseas Workers Welfare Administration, which is supposed to look after the plight of all displaced OFWs here and abroad.

Tourism workers will also receive little help. The budget for the Department of Tourism will go down, specifically its items for planning, training, and market and product development. For some reason, government wants to spend more on “branding campaigns” — even if tourism can’t fully bounce back any time soon given the continued rise of COVID-19 cases.

Budgets for the Department of Trade and Industry’s programs for exporters and MSMEs will also be cut. But far huger is the budget drop for the Small Business Corporation, which is supposed to be a lifeline for small business owners. There’s also no equivalent budget item for the Social Security System’s Small Business Wage Subsidy program.

It seems, then, that micro, small, and medium enterprises (MSMEs) — which constitute virtually all formal establishments in the country — will be largely left to their own devices next year.

By the way, the Department of Transportation will also no longer receive aid funding for drivers and owners of public utility vehicles who are reeling from the disruptions in public transportation. Many of them have been reduced to begging for alms in the streets.

Unlike health and aid, pet projects of Duterte will continue to receive substantial sums next year, if not large budget increases.

A hundred million pesos will go to the building of police stations, more than a hundred billion to pay for the pension of retired military and other uniformed personnel, and billions to the Office of the President’s confidential and intelligence expenses.

All these could go a long way to aid the millions of sick, hungry, and dying Filipinos. But Duterte would rather keep the military and the police happy and well provided for.

With virtually all schools and universities pivoting to distance or remote learning, a great disruption in our education sector is upon us. But the 2021 budget fails to allocate sufficient funds to smoothen this great transition.

Table 5 shows that the proposed increase in the budget of the Department of Education (DepEd) is mostly for the salaries of public school teachers.

Unsettlingly, just when classes are taught using modular worksheets, there will be measly increases in the budgets of curriculum design, learning tools, and instructional materials.

The operating budget of schools is also going to drop by more than 10%, while the budget for DepEd’s central office will go up by more than tenfold. Funneling funds this way doesn’t really make a lot of sense: the challenges faced by schools nationwide vary widely, and this argues for greater rather than lesser decentralization of DepEd’s resources.

Meanwhile, in the face of the unprecedented drop in enrollment in private schools, the budget for education service contracting was also cut by almost 30%. DepEd also has no aid for the private school teachers being laid off left and right.

All told, the 2021 budget doesn’t provide nearly enough funds for the government’s 3 leading agencies in education: DepED, CHED, and TESDA.

Unless the education sector musters enough resources to rise and meet the challenge of distance learning, a greater catastrophe in the educational sector is imminent. More Filipinos students will invariably be left behind.

5. More of the same, and sorely lacks imagination

All in all, the 2021 budget proposal betrays how far removed Duterte and his cabinet are from the realities of the pandemic and the recession. Clearly, they’re not up to the task of freeing us from the worst effects of the pandemic and building back better. The budget they’ve crafted is not fit for our needs.

Worse, they could also be passing up an opportunity to introduce much-needed budget reforms.

COVID-19 has brought to light long-standing problems in our society, such as our broken healthcare system, meager social safety nets, and weak transportation system. Radical budget reforms could solve these problems and more.

But by offering much of the same mediocre programs they’ve grown used to, the 2021 budget fails to offer anything innovative or significant that will make our economy and our society more resilient, sustainable, and equal.

Duterte and some members of his cabinet keep trumpeting that “there’s no money,” as if government has gone bankrupt. Instead, what has really gone bankrupt is government’s competence and imagination.

The pandemic has underscored how bad policies can ruin people’s lives and livelihoods. We can’t leave next year’s budget to the politicians alone. In the coming days and weeks, ordinary Filipinos should pay close attention to the 2021 budget deliberations and participate as actively as they can.

More than ever, Filipinos’ lives and livelihoods are at stake. – Rappler.com

Luis Abad is board chair, Zy-za Suzara is executive director, and JC Punongbayan is a board member of the Institute for Leadership, Empowerment, and Democracy (iLEAD).