An even more exclusive Senate?

In the final mile of the 2013 Senate race, the most recent and final pre-election SWS poll (released earlier this week) potentially sees nine out of 12 administration candidates making it to the magic 12.

This could be interpreted as a validation of the administration’s reform efforts – indeed a supportive legislature will be useful for the President’s reform agenda during his last 3 years. But the names that will potentially make up the 16th Congress, and the recent trends in the Senate, give pause to all of us who would prefer to see a much more inclusive Senate.

In a recent article by Prof. Nicole Curato of University of the Philippines, she mentioned that the Senate has a very “exclusive DNA.” She identified roughly only 30 families dominating the Senate during the 13th Congress to the 15th Congress.

Our research at the AIM Policy Center confirms this view. Based on the data, there appears to be only several main routes to the Senate: 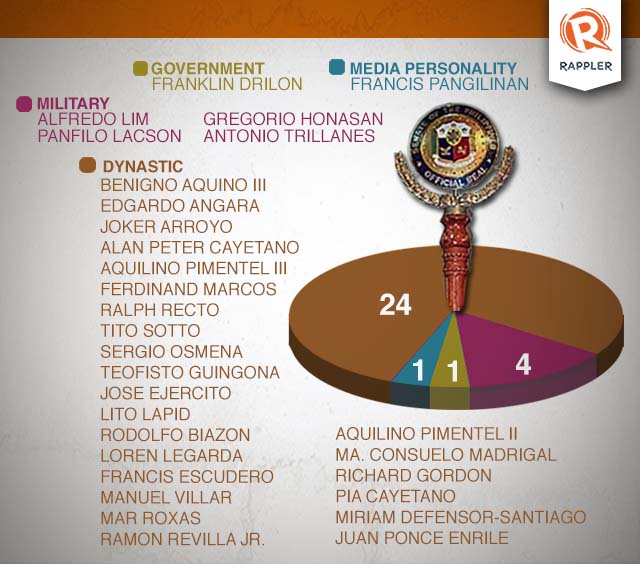 Looking at the Philippine Senate across these time periods could give us a better view of how the Senate has changed in its composition since its inception.

Dominance of Luzon, men and dynasties

The Senate has been dominated by leaders with certain characteristics – it is overwhelmingly represented by Luzon, almost exclusively composed of men, and in recent decades has seen an increase in senators belonging to political dynasties

(However, we point out that in the 1916 4th legislature, 12 out of 24 Senators are missing their biographical data; thus we base our metrics on the available data.)

(*Note: The 1916 4th legislature has only 12 available profiles of senators.)

Some senators claim they are the representatives of certain island groups (Luzon, Visayas Mindanao), and so we try to measure this using 4 metrics: where you were born, where you were raised, where you took your post-secondary education, and where you spent your professional career.

Using these 4 criteria, we find that about 8 in 10 senators across these 4 Congresses were born, or raised, or studied or worked in Luzon.

Gender representation has marginally improved in the Senate and women continue to be under-represented. For the 1916 4th legislature, the rules and convention of the time prevented women from voting or running from public office.

Further, in identifying dynasties, if we only count relatives who were elected in the Senate previously, this yields 9 dynastic senators for the 7th Congress, 6 for the 8th Congress and 10 for the 15th Congress.

This is a clear underestimate as many other senators have relatives in other elected positions. But even with this narrow definition, political dynasties appear to be on an increasing trend in the upper house.

(While technically, there are still no dynasties in the 4th legislature, we note that the scope of suffrage and those running for office were quite narrow. Only educated, property-owning, Spanish and English-speaking males could vote and run for the Senate. Thus, majority of the senators of the 4th legislature – given that Senate representation was not national but just comprised of joined districts – came from wealthy, elite and influential families in their respective areas.)

So if the SWS polls hold true, what will the Senate of the 16th Congress look like?

If we follow the most recent SWS poll, the 16th Congress will have a Senate with:

Perhaps the only good news is that women will be potentially represented more – with the possibility of up to 6 female senators in the 16th Congress.

The trend is clear. Using the profiles of 4 Congresses from 1916 to the present, and in addition, considering the possible 16th Congress based on the latest SWS Survey, the Senate is (and potentially will be) composed almost exclusively of males, hailing from Luzon and who have relatives serving previously in the Senate.

In the past, the Senate was once proclaimed as “the most exclusive club.” It seems we are still – and perhaps even more increasingly – headed in this direction.

In the last two weeks before the elections, voters still have a chance to make the Senate much more inclusive – for women, for Visayas and Mindanao, and for more new faces that could bring fresh perspectives and expertise, addressing the country’s challenges and opportunities. - Rappler.com


The author is an Associate Professor of Economics at the Asian Institute of Management and concurrently serves as the Executive Director of the AIM Policy Center. The author thanks AIM Policy Center staff for helpful inputs in crafting this article. The views herein do not necessarily reflect those of AIM. This article draws on AIM Policy Center’s ongoing research on “Building Inclusive Democracies in Asia”. Further information could be obtained by writing to: policycenter@aim.edu.