[FIRST PERSON] An eyewitness account of the People Power Revolution 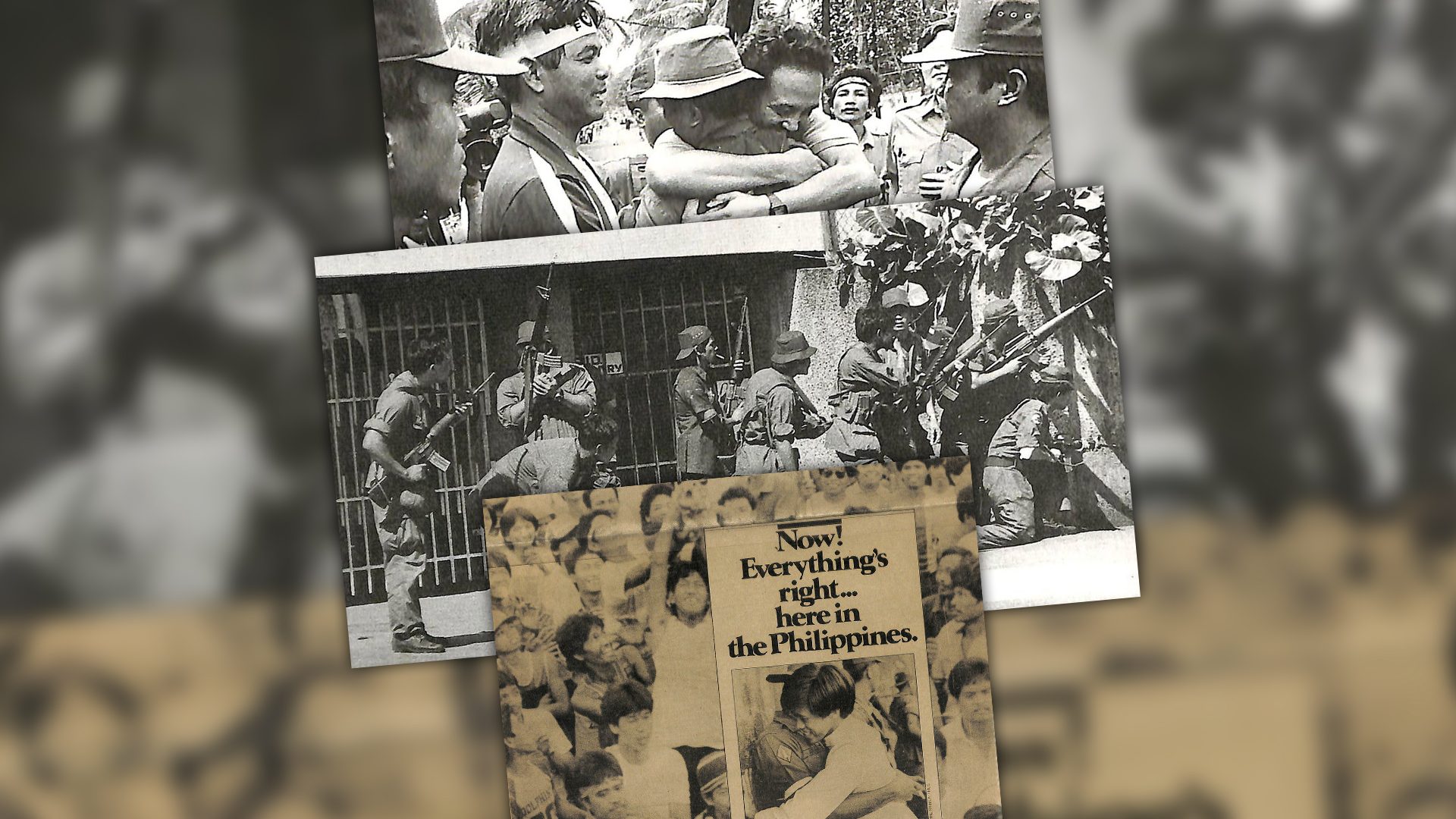 Facebook Twitter Copy URL
Copied
'Let us learn from history and keep them out from power. We cannot survive being duped, plundered, and killed twice or thrice over.'

It is already for many years now, maybe decades, that I have read many comments on social media discrediting, denying, maligning EDSA People Power. This vilification program is called historical revisionism — a project to discredit the decades of resistance to Martial Law, to delete the history of people who offered their lives during the dictatorship, to blame everything to the “dilawan,” to rebrand their family and claim power once more.

Duterte’s rise to power was part of this program. He also used it to dehumanize the drug addicts and communists so it was easier to justify their deaths. He used it to demonize the so-called “oligarchs” to our delight, not knowing he was to bring his own group of oligarchs in. The thousand and one trolls were hired to perpetuate lies, to pass distorted narratives, to hurl violent words, and to kill people. No wonder, people today are rooting for Marcos and Duterte. For decades since the Marcos’ come back, we have been bombarded with lies and lies. And some truly believe that the son will bring back the old rotten glory.

To counter it, all we have are our personal real stories. Narrating them as they really happened on the ground is our act of refusal to let other people write our stories for us. As someone said: “When writing the story of your life, do not let others hold the pen”.

I want to say that EDSA People Power and our struggle for freedom was real. It was not fake. We were not manipulated by the so-called “oligarchs.” Ordinary people, simple people, workers of all kinds, mothers, fathers, children were all there. We all wanted change. Yellow, a much maligned color today, was a symbol of resistance against the cruel Marcos dictatorship. In the name of those who were tortured and killed, in the name of the families who suffered, we also risked our lives.

Martial law is not just about Aquino and Marcos

For those who were not there, let me share our story. I was a second year Theology student then, preparing for the priesthood. We were NAMFREL volunteers during the snap elections. We underwent training on how to watch precincts, barricade ballot boxes with “kapit-bisig,” and protect them with our lives. It looked OA, as if one ballot box could save the world. But we felt it was so. For one vote spelled the future of this country.

St. Vincent Seminary Chapel also held a novena of masses for a peaceful and honest election. It was well-attended each night. We held hands, sang “One Little Candle” in the masses and “Ang Bayan Ko” on the streets. We felt it so deeply that tears roll down our cheeks as we sang them. Our young minds were fed up with Marcos Sr. Our cry was: “Sobra na. Tama na. Palitan na.”

February 22 – Saturday evening. Cardinal Sin called the Catholic faithful to go to EDSA that night. Ramos and Enrile were holed in there together with their men and were in danger. Cardinal Sin asked the people to help them defend themselves with our presence. It is a nauseating feeling today to see that those whom we were trying to protect from Marcos are back to protecting Marcos (and Duterte) again.

We did not directly go since we still had to finish our pastoral duties. But the next day, we organized our lay parishioners to go to EDSA on Sunday evening. We spent a whole night in EDSA and Horseshoe Village. The whole stretch of EDSA was filled with people. We shared food and drinks. It was one big party.

I need to say this to counter what people “believe” today: that it was orchestrated by the CIA, that it was an uprising of the elite, that there were just few people, etc. All these are false. They are constructed to bring the Marcoses back in. Today, on People Power day, I would like to give credit to the millions — all ordinary men and women — who risked their lives in front of tanks, those who gave food and flowers to soldiers with real guns, under helicopters ready to fire, during those four fateful days of February 1986. February 24 – Monday morning. We were able to enter Crame and saw some of the helicopters that landed. I was in front of the stage when the most famous jump of General Ramos happened. Then, it was announced that Marcos has fled. We all shouted in joy. We decided to go home after that to rest. On our way home, we heard on the radio that it was a false alarm.

But on our way back, we saw these men in military uniform with white armed bands trying to strategize a military attack on the compounds of Channel 4 (then a government channel and now the closed ABS-CBN). It was then occupied by the RAM forces (Reform the Armed Forces Movement) who were actually Ramos-Enrile men. We later knew the military were Marcos loyalists from a camp in Tanay and the mission given to them was to recapture Channel 4 since it was occupied by the “rebels.” These young military men looked tired and hungry. They did not seem to know what really was going on.

We immediately went down from our van, started to hold hands and sing the “Ama Namin.” People from the area came to join us little by little. Communal singing was the almost automatic response on the streets to the surprise of these unknowing soldiers. One asked me: “Ano pong meron? Anong prusisyon po yan?” The people brought food, flowers, water, and transistor radios. We started to talk with them and let them listen to Radio Veritas. We explained to them what was actually happening. The women volunteered to give flowers; the seminarians began hugging the soldiers; we made them rest and eat. The tension-filled atmosphere calmed down.

We started to negotiate with Colonel Santiago and the RAM forces inside the Channel 4 compound who were then ready to do a counter-attack. We pleaded with them not to proceed because the soldiers outside were just too tired. The Colonel and his men, who were then ready to fire, relented. To our surprise, the military commanders unexpectedly listened to young seminarians whose cassocks were soiled from sleeping on the streets. All sides were open and receptive — the loyalist soldiers, the RAM boys, the mothers, the fathers and kids and all who were there. Everyone wanted to be of help. Because of this, the otherwise violent firefight was avoided.

The only existing proof of St. Vincent Seminary’s participation in EDSA Revolution is the man in a cassock hugging the soldier. It was taken on the peripheries of Channel 4 after the loyalist soldiers calmed down and refused to fire at the “rebels” inside the compound. The inset photo is Archie Fernandez, a Vincentian seminarian at that time. This photo was used by Philippine Airlines to spread the symbol of EDSA worldwide. It says: “Now, everything’s right here in the Philippines.”

After we had pacified the Channel 4 friction, we stayed in the area until the next morning (February 25). We just kept on praying, singing, and sharing. There was even a child who celebrated her birthday at the barricades and shared her food among us who were in the night vigil. I can still remember a house in the area who opened their gates for us to drink coffee, or use their toilets and take some rest. We were actually negotiating with the Marcos loyalist soldiers who were guarding the Channel 9 transmitter. This is the last communications TV channel Marcos will use to broadcast his victory announcement.

We kept talking with the soldiers the whole night to convince them to come down and eat — mothers, grandmothers, fathers, seminarians, and sisters. We left our barricades and came near the transmitter to plead that they talk with the other forces. But they did not listen. They even pointed their guns at us. But still we kept watch at the barricades. And then the RAM boys attacked the transmitter the next day, from the helicopters and from the ground. We all rushed and fled for safety. In the stampede, I was pushed inside the garage of a nearby hotel. After the scuffle, I was still wearing my sotana but lost one of my shoes. I had to walk home barefoot. After the attack, one of two of the men who guarded the transmitter was killed. It was a sad day.

Later in the day, Marcos and his family fled the Philippines for good. The rest is history.

No, let me correct myself. The story did not end there. They are back again with stronger power reinforced by the Duterte oligarchs and other plunderers in one UniTeam.

Let us learn from history and keep them out from power. We cannot survive being duped, plundered, and killed twice or thrice over. – Rappler.com