Facebook Twitter Copy URL
Copied
'We owe it to the 500,000 volunteers and lay coordinators in our parishes around the country, some of whom prepared for more than a year to help guard your votes on election day, to explain what they have been sacrificing for'

Allow me first to thank you for your genuine concern about the ongoing work that is being done by PPCRV and other groups in the just concluded elections. I would like to answer the question going around social media about why actual ballots are not being audited by PPCRV. This is not our mandate. It is our friends at NAMFREL and LENTE who are actually doing this as we speak. They are currently at Diamond Hotel, and I post a link of the livestream of this activity at the end of this message. The activity is called the Random Manual Audit. Around 757 randomly selected ballot boxes are opened, and actual ballots are checked against Election Returns (ER), as you envisioned.

What we do at PPCRV is to check against transmission fraud when ERs go into cyberspace, to protect against a term you know as dagdag-bawas. We compare pre-transmission ERs to post-transmission ERs. Together with others, it is a wholistic audit of the process in any election cycle. Let me elaborate further in detail, but I want to address, most of all, comments about our activity as a mere rubber stamp.

We owe it to the 500,000 volunteers and lay coordinators in our parishes around the country, some of whom prepared for more than a year to help guard your votes on election day, to explain what they have been sacrificing for. They are mostly parish-based youth volunteers who have given their time and love for free. They were there with you in the precincts. Further, IT expert volunteers have also conducted tedious source code reviews and monitoring of final testings and sealings to assure that VCMs can really count correctly before we vote. This work is not just now; it has been going on for more than a year, for you, our voter. Protecting against dagdag-bawas has been in place since candidate Noynoy Aquino was elected; it also happened in 2016, when Duterte and Robredo were elected. Summations in the old manual days could be shaved to take from one candidate and add to another, thus the term dagdag-bawas.

PPCRV wants physical evidence. Our volunteers toil all evening long, after a long day of assisting you in the hot and humid precincts, to get the fourth copy of the election returns. This fourth copy is printed BEFORE the VCM transmits ERs into cyberspace. We can then compare this pre-transmission paper ER with the transmitted electronic ER sent to PPCRV and the media and the KBP – ABS-CBN, CNN, TV5, Rappler, INQ, etc. These electronic ERs are contained in a server called the PPCRV-KBP Transparency-Media Server.

We were not alone in the UST Command Center. The fourth estate was there with us in the arena, energetically outdoing each other to give you breaking news of the next transmission that May 9! Ang bilis nila tumakbo sa kanilang stations! Every update of transmission was breaking news! Unahan! More importantly, they also had the data, free to mine, slice, and dice for analysis in any way. To add more layers of audit, we then gave access to the data to La Salle, Ateneo, UST, and any other university who may want it.

While TV screens show results, PPCRV is still in full action in precincts all over the country. In Lingayen, Dagupan, in Davao, Cotabato, Marawi, in vote-rich Cebu, in the mountains of Malaybalay, the islands of Tawi-Tawi, everywhere we can be. Imagine the scale of that for a moment. On foot, on tricycles, on horseback in some cases, volunteers pick up as many of these fourth copies as they possibly can. Because they know that the nation’s trust depends on it. Again, they are parish-based and work for free, working alongside handsomely paid political watchers that gain their copies, too. But that’s alright; we do it seriously for love of God and country, color blind. These copies are then rushed to their diocese command centers to be consolidated at the provincial level from all their different cities and presintos. We were fielding calls up to 4 am from our hardworking lay coordinators in dioceses nationwide. We waited the next 12 hours for Luzon’s ERs to arrive, and the next 24 to 48 hours for Visayas (so many islands), and perhaps three or more days for Mindanao’s.

The first ERs came at midnight of May 9 to the applause of excited volunteers. Pictures from coordinators flooded my Messenger app, with the coordinators saying how proud they were, probably to challenge the Archdiocese of Jaro, our perennial winner who manages to get 100% of their ERs collected every election. I also got a message from Monsi Oso of the Archdiocese of Jaro. He narrated with pride that they managed to pick up 100% of their ER’s in Guimaras as well. That is not an easy task across a whole province.

At the UST Command Center, daily, 1,000 mostly young volunteers take each ER, encode the president, VP, and senators, and see for themselves how the country voted in microcosm. They compare that pre-transmission physical copy of the Electronic Return to the PPCRV-KBP Transparency Servers’ post-transmission Electronic Return. A match means no dagdag-bawas happened in cyberspace. The match rate was 99.995 in 2019. I myself encode at the Command Center, too, sometimes until 3 am. It is cathartic after a year and a half of planning to see how we manage, through the work of our volunteers, what message our communities are sending the country through their votes. I just imagine of course, that only God knows their reasons, and that only the winners are accountable. But I appreciate as sacred the work that went into getting what some call this mere “carbon copy.” 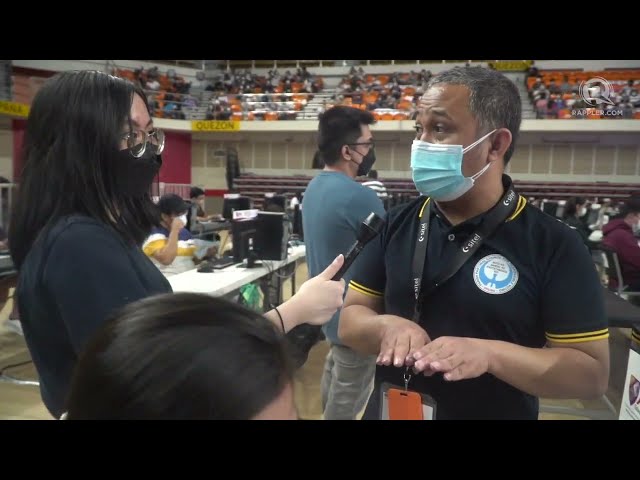 I would request that we all take a moment of our forwarding energies to thank our PPCRV volunteers, too, who don’t know you but truly served you on election day despite their limited resources. As for the questions about my ability, my many technology companies have run some of the most complex systems you can imagine for over 34 years. I have been blessed with my good reputation and success in the industry both here and abroad, and I wanted to give back. My only poverty today is to be color blind in my role about people’s political choices, and assuage with respect everyday angst about whether the results are real. It’s a hard job – one needs to understand tech, be patient enough to cooperate with but challenge the Comelec, know our wonderful lay volunteers’ needs, and have some media ability to patiently explain in layman’s terms the complicated workings of our elections. But I do my best, and listen.

This link shows the proceedings and you may ask Lente and Namfrel how their observation process goes. Here is a livestream link of that activity for your easy access. – Rappler.com

Myla Villanueva is a technopreneur and 2022 chair of the Parish Pastoral Council for Responsible Voting.