[Science Solitaire] Fresh off the science press: Your listeners are your brain savers Facebook Twitter Copy URL
Copied
'If you are genuinely listening to someone, you have to send signals that you are really paying attention to what the other is saying AND not saying'

Did you notice that your need to vent has become more acute and more frequent in these pandemic times? So, who listened to you? Whoever these people are, especially if you are in your 60’s and up, send them thank you messages, because science has just found out that they did not just make you feel less alone – they also saved your brain.

The ability to speak well, especially in public, is one of the most perceived powerful strengths, but what about “listening?”

“Listening” is often unheralded because it is one of those things that happen “subrosa” – when you are under the shade of the other, closely taking in what s/he is saying. In conversation, it happens when people take turns not just to talk but to listen. A very recent study has just discovered that if you have people in your lives who listen to you, despite your older age, you are able to think better than those who don’t have people who reliably listen to them.

We all know, even if you are not a scientist, that aging generally comes with an unwanted package of diseases and conditions, foremost of which have to do with diminished capacity to gain new knowledge, remember, plan, imagine, express, and solve problems. “Cognitive resilience” is being able to hold on to these functions despite your age. 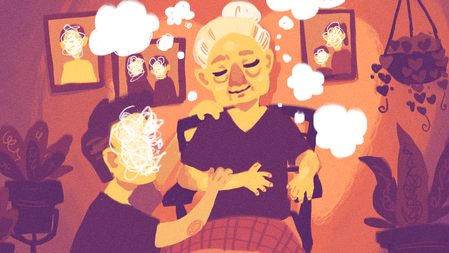 The arrow of time is unstoppable but our brain ages on a different pace across each of our lifetimes, depending on many things – your brain structure, how your entire body feeds your brain, and your environment.  Just attend a reunion with your old buddies and you will notice that though you were all generally quick to tease, pick up jokes, and navigate one another’s point of view when you were in school, now in your 50’s and older, you start to notice stark differences in the way you have all aged. If some of your friends seemed so much better in terms of how they think and cope, despite the general and common ravages of time on our brains, it could be because they have had good listeners across their lives.

The study looked at over 2,000 individuals in their 60’s and up. They measured what specific kind of social support really has an effect on how we are able to foil the slings and arrows of time that mess with your brain. This “foiling” is what scientists call “cognitive resilience.” They found that among five kinds of “social suppor,t” namely, “emotional support,” “love and affection,” “interaction,” “getting advice,” and “listener availability,” it was only “listener availability” that registered a valid connection with greater “cognitive resilience.”

The scientists found evidence in this in the brain scans and cognitive tests of people they examined. They also think that “listening” induces certain brain-body processes that help create new brain cells. This is very significant as new brain cells generally happen in much decreased levels in older people or not at all.

This is a wake-up call on tiptoe because “listening” seems too “easy” and it does not cost anything but time.

But look at how much we have overlooked it. In our formal education, there are no widely established sessions in our educational institutions that put “listening” on the same level of being essential as “reading, writing and math.” I have once read “dementia” described as “receding from one’s own self.” So then, with this finding, “listening” is turning out to be that skill that could help up us save each other especially in our later years. Thus, this skill has to be consciously taught and strengthened in family, school, and in all levels of social discourse. Maybe this should be even included in the Human Development Index – “listener availability.”

Another thing about listening is you cannot force someone to listen to you just because you are old. You can make them hear you but not listen to you. To have available listeners in your later years, those listeners were already most likely present in your earlier years. This was also noted in the study. I think it would also help that you have also been an available listener to your friends and family in your earlier years.

And listening involves not just your ear. If you are genuinely listening to someone, you have to send signals that you are really paying attention to what the other is saying AND not saying. Paying attention to how the other is telling her/his story – even the pauses, the gestures – and more importantly, the ability to faithfully interpret what s/he is saying, is what listening means. “Listening” does not mean being “speechless.” Otherwise, we can just talk to anyone or anything that is not going to talk back.

So as you read this, that good space in your head right now, despite your age, has an “IOU” on it – meant for the available listeners you have had the privilege of having in your life. Send them a thank you note, or even better, listen to what they have to say today. – Rappler.com