Before the 2016 elections, many analysts (including myself) have pointed out that regardless of who would win, the country will do well at least up to 2017.

The Philippines has shown increased resilience in the last decade. Though poverty stayed practically the same at about one in four Filipinos between 2006 to 2012, the Philippine Statistics Authority reported last October that in 2015, income poverty has reduced to about one in five Filipinos (21.6 percent).

Several people likely do not put as much value to the GDP, which measures total income in the country (by households, government, and businesses), and may even question the reduction in income poverty. Former Director General Cielito Habito of the National Economic and Development Authority suggests that three issues are always in most Filipinos’ minds: PTK – presyo, trabaho, kita (prices, jobs and income).

That Filipinos think in economic terms, even if many do not see the importance of the GDP and poverty incidence, would still suggest that government ultimately should focus on implementing an agenda to sustain economic growth, improving wealth, creating jobs, and maintaining prices at manageable levels, and in general developing ways for the country to attain our development plans as well as accomplish the 2030 Global Agenda on Sustainable Development and the Sustainable Development Goals (SDGs).

Among these goals is gender equality.

On gender equality, the Philippines has had a rather impressive record.

In a recent report of the World Economic Forum on 2016 Global Gender Gap, the Philippines maintained its highest rank in the ASEAN (Association of South East Asian Nations), which the country has done since 2006 when WEF first started releasing the Global Gender Gap Report.

The Philippines ranked 7th among 144 countries assessed around the world for 2016, and is not only first in ASEAN, but first in the whole of Asia. The Global Gender Gap Index is a composite measure of gender gaps on four socio economic outcomes: economic participation and opportunity;  educational attainment; political empowerment; and health and survival. 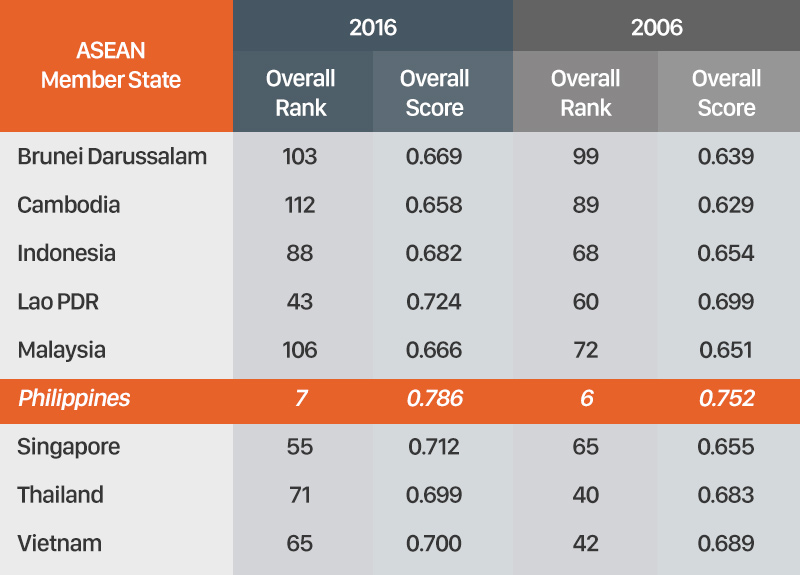 But the Philippines has yet to close the gender gap on political empowerment and economic participation and opportunities, with a much poorer performance in these latter two outcomes.

In this article, we examine more closely issues on economic opportunities between men and women in the country by looking at selected SDG indicators and other related statistics.

A key indicator of the labor market is labor force participation rate, defined as the total percentage of working-age persons (i.e., aged 15 years old and over) who are part of the labor force.

The labor force or economically active population comprises the employed and unemployed. The unemployed consists of persons who are (1) without work; (2) currently available for work; and (3) seeking work or not seeking work because of the belief that no work is available, or awaiting results of previous job application, or because of temporary illness or disability, bad weather or waiting for rehire or job recall.

Those who are not in the labor force (i.e. who are neither employed or unemployed) include stay-home spouses, students, persons with disability, retired persons, and seasonal workers. Thus, while women are making strides in obtaining educational attainment equal if not surpassing that of men, they are not joining the labor force as much as men. 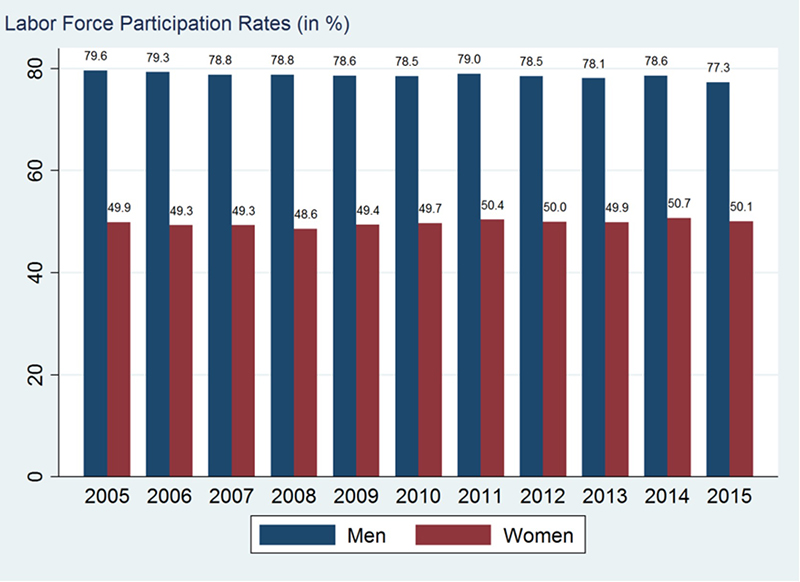 Note: Data are obtained from averages of the quarterly Labor Force Survey conducted by the PSA.

The labor force participation gap between men and women has hardly changed, with the gap having only slightly decreased by 2.5 percentage points from 2005 to 2015.

Of course, if we had data a century ago, we would probably find that women have made much headway in being part of the labor force, but sadly, data from recent years shows little progress in improving the labor participation of women in the country.

Data from the International Labour Organization (ILO) suggests that lower labor force participation among women is noticeable not only in the Philippines but also across all ASEAN member states.

The unemployment rate, the ratio of the total number of unemployed to the corresponding labour force, is another indicator that most governments closely monitor. It is one of the 240 indicators for monitoring the SDGs.

Unemployment rates in the period 2000-2015 show a general reduction across ASEAN economies rate between 2000 and 2015. Further disaggregation among youth (aged 15 to 24) and adults (aged 25 and over) shows that unemployment rates are noticeably much higher among youth than among adults).

While women in the Philippines who do join the labor force seem to have similar economic opportunities as men since their unemployment rates are not substantially different with those of men, data disaggregation of employment across major sectors (Figure 2) shows that men and women are situated differently in the job market.

Two decades ago, men were dominant in in agriculture (with half of working men working in the sector, about three out of ten worked in services, and a fifth were in industry).  In the mid-nineties, working women were also dominant in services, but at a smaller share (56.5%), with less than a third (29.9%) in agriculture, and the rest, comprising less than a sixth (13.6%) in industry.

Industry which often provides better quality jobs has however been employing only a small proportion of men, and an even smaller share of women (whether two decades ago or currently).

Figure 2. Share of Employment by Sex Across Major Sectors in the Philippines: 1995-2015 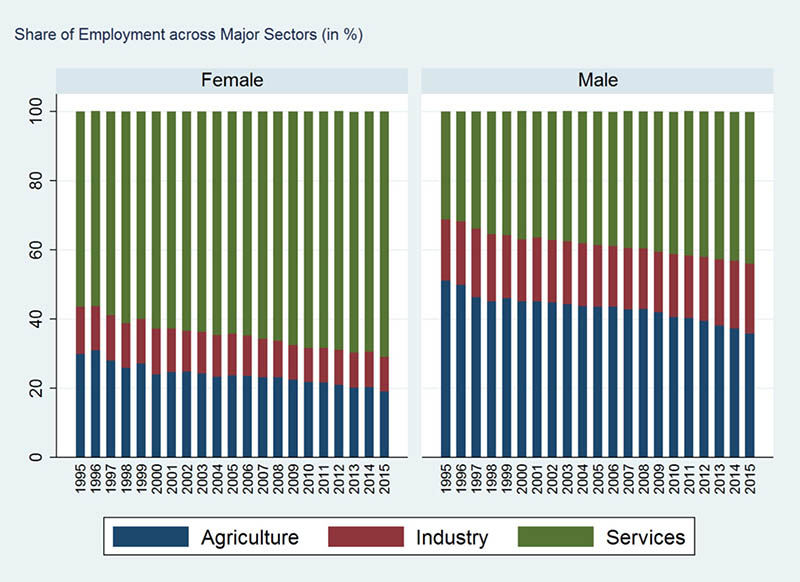 ILO data shows that women in several ASEAN member states (including the Philippines) tend to have a bigger share of vulnerable employment than men.

Those in vulnerable employment, such as own-account workers and contributing family workers are less likely to have formal work arrangements, and are therefore more likely to lack decent working conditions, adequate social security and voice. Vulnerable employment is often characterized by inadequate earnings, low productivity and difficult conditions of work that undermine workers’ fundamental rights.

Thus, Filipinas are not just outnumbered by their male counterparts in the labor force; a bigger share of women in the country who get employed are engaged in jobs lacking decent working conditions.

These women in vulnerable employment usually work in informal non-agriculture employment (particularly in services). Typically, they either work with unregistered companies in the informal economy or as unpaid family workers.

These poor working conditions provide them limited opportunities for social mobility. Those in vulnerable employment are also part of the visibly underemployed who work less than the 40 hours a week and who are seeking or available for additional work. There is a lack of social protection for these workers in vulnerable employment.

Data from the ILO’s Global Wage Database shows that overall, there is a gender wage gap exists throughout ASEAN in the period 2000-2011.

In the Philippines, however, women seem to be slightly earning more than men in the Philippines. In Cambodia, wage gaps have increased further in favor of men to yield the highest wage gap in the region.  This is followed closely by Singapore.  Thailand has the least wage gap, next to the Philippines, but the gap in Thailand still favors men.

Data disaggregation on the gender wage gap (Table 2) and the female share of occupational employment (Table 3) by major occupation groups in the Philippines sourced from the PSA’s, : Decent Work Statistics Online Database reveals a very interesting story that averages mask what is going on in specific occupations.

High-level positions (i.e., officials of government and special interest- organizations, corporate executives, managers, managing proprietors and supervisors), generally have wages favoring women with women having a far bigger share than men in this occupation. For some occupations (particularly technicians and associate professionals, clerks, service workers and shop and market sales workers), men are better compensated despite women having the bigger share in occupational employment. The widest disparity here is among the professionals group. 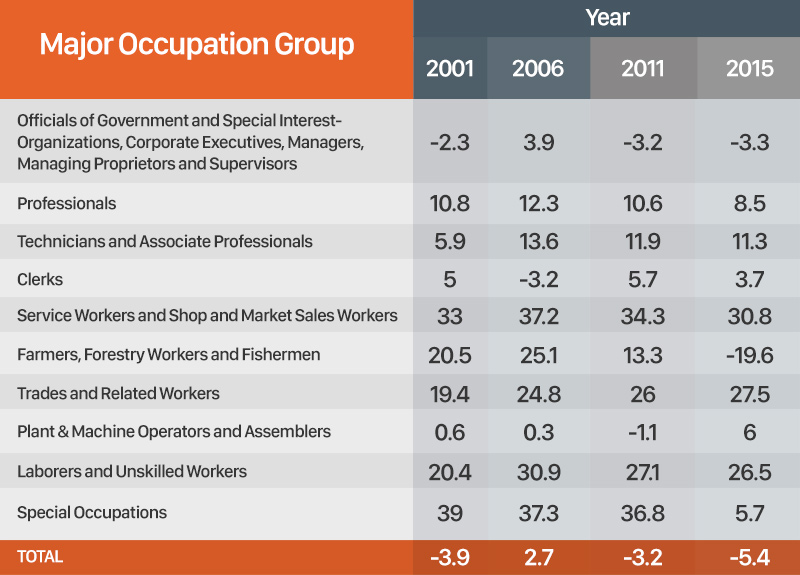 Note: Data are obtained from averages of the quarterly Labor Force Survey conducted by the PSA; data shown in Table are only for selected years though a longer time series is available from the PSA website. 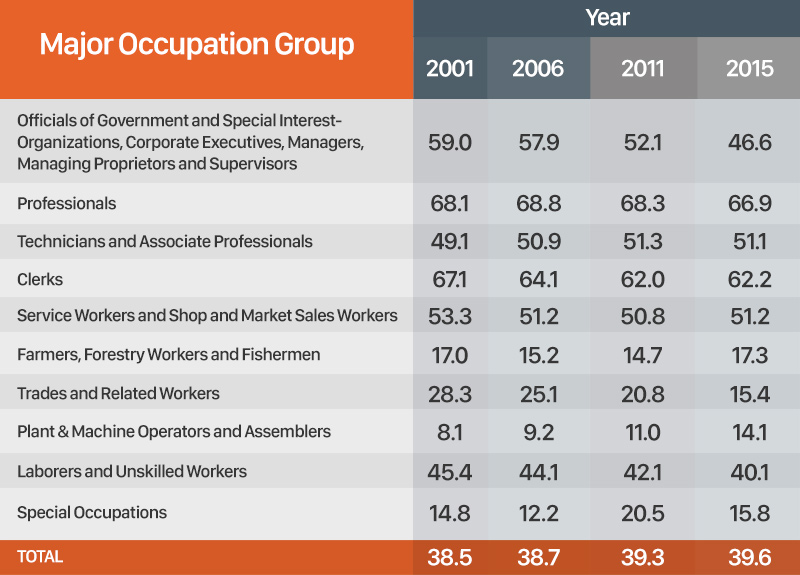 Note: Data are obtained from averages of the quarterly Labor Force Survey conducted by the PSA; data shown in Table are only for selected years though a longer time series is available from the PSA website.

About one-and-a-half decades ago, the gender gap was in favor of men among those working as farmers, forestry workers and fishermen, but the gap has reversed in this group. There are also occupations with a higher share of male workers with better compensation for them than women; these occupations include trades and related workers, plant and machine operators and assemblers, laborers and unskilled workers and those classified under special occupations.

What needs to be done

While women have made some headway in economic opportunities with lowered unemployment rates and decreased share of vulnerable employment and with the overall wage gap in their favor, they still face disadvantages compared to men as half of them do not join the labor force.

When they are employed, a much bigger share of women are in the services sector and in vulnerable employment compared to men. On vulnerable employment, a fundamental issue is unpaid work. While the gender pay gap seems to favor women in the Philippines, averages mask disparities between the sexes in pay differentials among various occupational groups.

Government will need to play an important role to ensure that quality jobs are created, and that economic opportunities are equal for both sexes. It will be important to examine the reasons why too many women do not join the labor force and why some occupations and sectors are dominated by one sex or the other, as well as why gender wage gaps persist in some occupations.

Further, government needs to provide the proper interventions for addressing gender-based barriers so that everyone can be given opportunities for being economically active, for capacity development and for career advancement.

Government will also need to determine ways of providing more social protection for those engaged in the informal economy and to address issues about unpaid work. About two decades ago, a time use survey (that measure comprehensively how time gets allocated to different tasks by different individuals on a daily or weekly basis) was piloted in two barangays, and this survey, if institutionalized, can provide a lot of understanding about unpaid work as well as the extent of time poverty among women and men.

Employers across both public and private sectors will also need to consider possibilities of unfair working conditions between the sexes in all occupations, and examine practices that may contribute to gender biases in the workplaces, including issues about compensation and sexual harassment.

Many times, we take our words for granted, making jokes about the other sex, not realizing that there are unintended consequences to our words. Ultimately, we all should be more gender-sensitive in thought, word, and deed.

We should work for gender equality, making sure that everyone, regardless of sex, gets equal opportunity so that no woman or man will be left behind. – Rappler.com

Dr. Jose Ramon "Toots" Albert is a professional statistician who holds a PhD in Statistics from the State University of New York at Stony Brook. He is a Senior Research Fellow of the government’s think tank Philippine Institute for Development Studies (PIDS). He is also currently a professorial lecturer at the Ramon V. Del Rosario College of Business of De La Salle University and an adjunct faculty member of the Asian Institute of Management.