Facebook Twitter Copy URL
Copied
'The Philippines, sadly, has the distinction of being one of the hotbeds of TB in the 21st century'

Last September 25, a photo exhibit, “Trials and Triumphs: Coping with TB-related Discrimination,” was launched in Iloilo City. This traveling photo exhibit highlights the experiences of 15 TB survivors who’ve experienced various forms of stigma and discrimination, and shows how they coped with strength and resilience. Other venues in Manila, Luzon, and Mindanao are being arranged.

The exhibit brought back memories of 1981, when, as medical interns, we spent a week in the Philippine TB Society building in Iloilo, a lovely Art Deco-era structure. The building is similar to the Quezon Institute (QI) in Manila, named after the Philippine president who died of TB. We took medical histories, examined patients, and looked at fluoroscopy films (about a sixth the size of regular chest x-rays), trying to discern what those flecks, lines, and shadows meant.

Years later, I worked in camps for boat people in Palawan and Thailand, where refugees were screened for TB, required to have a chest x-ray, and treated, before being allowed to depart for the “receiving” countries. I would listen to “breath sounds” with the stethoscope, noting the fine crackles of air passing through congested lung tissue; and compare x-rays, request sputum smears, and prescribe treatment.

Medicines were taken under strict supervision by a nurse — the beginnings of “directly observed therapy.” Some patients would pretend to take the medicines, then spit them out when they left the clinic, so our nurses devised innovative ways to check if people swallowed the pills.

There was much concern about TB coming to the shores of countries like the USA, Canada, and Australia. Inadequate treatment meant that people had to stay in the camps for several more months. Over-treatment was common, since different countries had different guidelines for screening, diagnosis, treatment, and clearances for travel. And while refugees and migrants may have been the initial focus, eventually TB arose in the inner-city ghettos of many richer countries.

It is somewhat surprising that TB continues to thrive — after all, effective treatment has been around since 1945, with the discovery of Streptomycin. This was followed by Isoniazid, Rifampicin, and others — combinations of which rendered most people non-infectious after two weeks. These developments, together with better living conditions, housing, and nutrition, meant that “the captain of all these men of death,” which was responsible for 25% of all deaths in the 19th century, had been conquered. There were high cure rates especially with directly observed treatment, lasting six to nine months.

But it has not been totally conquered, though. Mycobacterium TB is ancient – it has been around for 70,000 years at least and thrives in pockets of deprivation. It is called a “disease of poverty.” Congested slums, bad living conditions, and incarceration contribute to the spread. The HIV epidemic has also facilitated a resurgence, as TB is the most common opportunistic infection affecting people with impaired immune systems. Worryingly, multiple drug-resistant strains (MDR) have developed. These need second- and even third-line drugs, which are up to a hundred times more expensive than the usual primary course of treatment. But only up to a third of people with MDR TB are reported to be on treatment.

World’s deadliest infectious disease: What you need to know about tuberculosis The Philippines, sadly, has the distinction of being one of the hotbeds of TB in the 21st century. It ranks no. 4 worldwide in the number of new TB cases, after India, China, and Indonesia. One million Filipinos are thought to have active TB, and it is estimated that 70 persons die of TB each day in the country – or one person every 20 minutes.

The social and economic impacts of TB are considerable. Studies show that TB causes substantial losses in productivity for already poor individuals and families – on average losing four months of work, and 30% of yearly household savings.

One thing has been identified that significantly contributes to its spread – stigma. Stigma leads to people not seeking diagnosis and treatment, not following up, or not completing treatments. It leads to ostracism from family, friends, and work colleagues. TB stigma continues to exist, right up there with diseases like HIV/AIDS and leprosy. Cancer may elicit sympathy, but often TB comes with its own set of images, including fear and disgust. The name would not even be said; “weak lungs,” “spot sa baga,” or “mahina ang baga” are common euphemisms.

COVID-19 restrictions have also exacerbated TB. People were more reluctant to see health providers. Follow-up and screening activities were disrupted. Some countries have implemented innovations – social protection strategies, such as cash transfers and food vouchers to encourage earlier diagnosis – and these measures have helped increase treatment compliance and reduced economic burdens. But even these will not be enough if stigma persists.

That is why awareness, education, and advocacy are needed to end TB stigma. The photo exhibit and testimonials in Iloilo were an eye-opener. The exhibit was supported by USAID Philippines and implemented by the Philippine Alliance to Stop TB, a network of 17 CSOs, led by ACHIEVE Inc. The PASTB partners in Region VI are the Family Planning Organization of the Philippines Iloilo chapter, and ChillLungs Western Visayas.

(I was shamed by a doctor at the healthcare facility. Having TB is not a reason to trample on one’s humanity. Because of what happened, I found the strength to be even more active in working with organizations who are doing advocacy work for TB.) 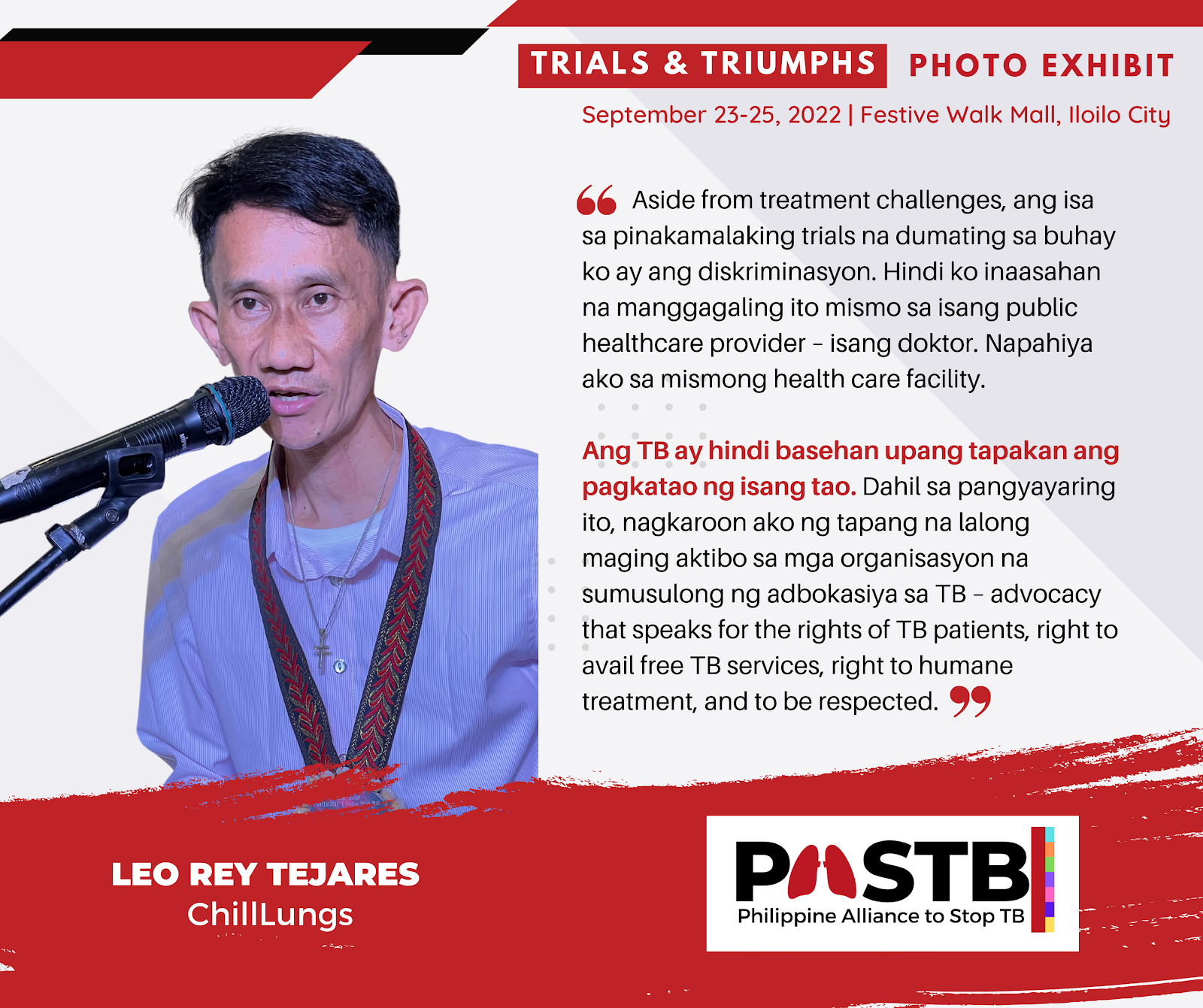 Iloilo City Councilor Alan Zaldivar disclosed that he had TB before but was only now speaking openly about it, inspired by the exhibit and the support from NGOs. “When I had TB many years ago, I was so anxious and depressed, I had to take medicines for six months, I could not hug or kiss my parents…. I felt so alone with no support group or others to talk to. Several times I thought of ending my life.”

Meanwhile, Christine Mosqueda, DOH-Region VI National TB coordinator, noted, “This photo exhibit is a great way to remind us that TB is curable and that there is life after TB. Let us help each other to fight stigma and discrimination and disseminate correct information about TB.”

This is why anti-discrimination campaigns are necessary to reduce stigma, and eventually, to help to end TB, too. – Rappler.com

Dr. Vic Salas is a retired physician and public health consultant based in Iloilo. He is on the board of ACHIEVE Inc., an NGO that leads the Philippine Alliance to Stop TB.