“Today, history is made, once again, in these august halls.” This was how newly elected Speaker Lord Allan Velasco described his controversial rise to power on October 12, after weeks of power struggle with Speaker Alan Peter Cayetano on their supposed term-sharing agreement brokered by no less than President Rodrigo Duterte at the start of the 18th Congress in 2019.

Oddly, the said election was not done in Batasang Pambansa Complex, the official place of business of the House of Representatives. Removed from the grandiosity of the session hall draped with the Philippine flag that seemed to clothe whoever stands at its foot – at the Speaker’s rostrum – with indisputable authority, Speaker Velasco took oath on an assembled metal platform with a Philippine flag flashed on a LED board on the background, with representatives seated on chairs that are probably used for catering or social gathering.

For Velasco’s allies, it could not have been more ceremonious. It was definitely a show of power as members of Congress unseated a Speaker, a head of a branch of government, in an apparent session organized in Celebrity Sports Plaza. Called by some analysts as “Celebrity session,” not only for the name of the venue but also for the nature of the session, the power play indeed felt like a movie – the representatives as actors, and the Filipino people as audience. This was not a legal issue; the validity of the session and the authenticity of the mace were irrelevant. What mattered is that Velasco had the numbers.

Despite these, the Velasco House continued to address the “august halls.”

Pandemic and the halls of Congress

Because of the pandemic, the august halls of Congress have morphed into a “virtual hall,” where the authority of the Batasang Pambansa of the House or the GSIS Building of the Senate has disintegrated to the extent that the representatives and senators themselves wield this authority at their own homes, or wherever they may be when a session or hearing is called.

The COVID-19 pandemic has changed the way our political institutions, especially Congress, operate. Both chambers of Congress have instituted adaptive measures to respond to the restrictions and health regulations imposed. While technically the legislature is exempt from the restrictions on gathering due to its official and necessary function, it was laudable for Congress to allow its members, and the respective resource persons, to participate remotely through online means. However, it begs the question why Senator Leila de Lima was still prohibited to participate despite this, and may be argued that it deprives the Filipino people of their right to be represented in the Senate by a legitimately elected senator.

The transition was seen, and was first tested, during the Special Session called by President Duterte to enact Bayanihan to Heal as One Act or Bayanihan 1 last March. Since then, Congress has had such an eventful half a year that may indicate that the representatives are fond of doing remote legislative work. The ABS-CBN franchise renewal hearing, the Anti-Terror Law, Duterte’s 5th State of the Nation Address, the PhilHealth investigation, and the 2021 budget deliberations had been possible because of technology.

Notwithstanding the perceived accessibility tied to the online means, such means themselves backfired in more ways than one. For instance, it definitely loosened Cayetano’s grip as Speaker. At the height of the budget deliberations, coupled with the pressure from the Velasco camp to pass the helm, Cayetano railroaded the passage of the 2021 budget on second reading and suspended the Session until November 16. One of those vocal was Representative Lito Atienza, who was attending remotely and was purposefully “muted” along with others objecting to the move.

From one fist bump to the next

Such abrupt suspension of the Session created a void in the “virtual hall.” Again, technology made it possible for the representatives to enter into caucuses and backdoor negotiations that allowed Velasco to garner majority support in just a few days to unseat Cayetano. A virtual handshake sealed the support from most blocs.

Back to the “Celebrity session,” Representative Rufus Rodriguez, chairman of the House Committee on Constitutional Amendments and a respected legal mind in the House, explained the legality of holding such session – again remotely.

Grounded on the power of the majority of all members of the House (Article VI, Section 16(2) of the 1987 Constitution), he argued that it is not the Batasang Pambansa nor the House Mace that vests authority on a legislative act, but the warm bodies, although some are remote, of the duly elected representatives of the Filipino people. With the majority of 186 out of the 299 members, whose names were undisclosed and most voting remotely, the first Speaker of the House from Marinduque was installed.

The issue on the legality of the Celebrity session and the consequent election of Velasco, however, is already moot, because of the ratification held a day after at the opening of the Special Session at Batasang Pambansa called by President Duterte to continue the budget deliberations and ensure the timely passage of the budget. Simultaneous with the ratification, Cayetano, in a Facebook Live in front of his house in Taguig wearing formal Barong, tendered his irrevocable resignation as Speaker while motorcycles noisily drove behind him without any due regard for the supposed 4th highest official of the land.

Minutes after lawmakers ousted him, Cayetano ‘resigns’ as Speaker

The House’s experiences with the technological advances in the last 6 months have indeed redefined the meaning of what we call the august halls of Congress. A more inquisitive thought would lead us to see whether such innovations could have developed the seeming disregard for honor and respect to the traditions of the national legislature. Or whether it merely exposed, if not heightened, the underlying and pre-existing political interests and maneuvering that have been there all along – this time, just manifested through different means.

We must tie our understanding of Cayetano’s fall and Velasco’s rise not only with the failure of what they call a gentleman’s agreement or sheer political ambition, but as a direct result of the new power dynamics that the remote legislative scheme has opened. Such is a power dynamics that is so accessible, yet so exclusive; welcoming, yet deceiving. 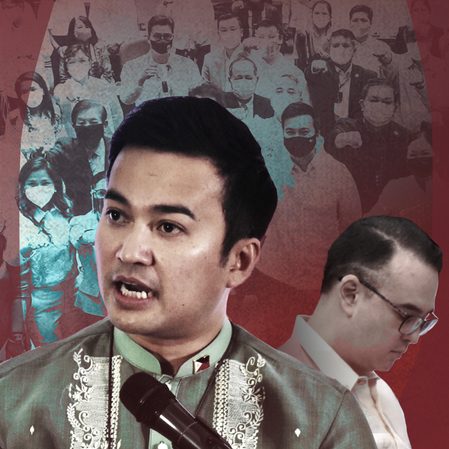 Probably, this is best seen at the seeming overlap of supporters that signed for the speakership of either party, where both Cayetano and Velasco claimed 180 to 200 supporters each in a body of not more than 300. Assuming that neither of them was bluffing, it means that there are representatives who knowingly committed to both of them, and intently waited who will emerge victorious on this battle. This impending culture of placing only one foot at the door – one for Cayetano and the other for Velasco – actually erodes the capacity for effective governance, if not decency, of our lawmakers. This is just the start.

We are happy that one group – the Makabayan bloc stayed out in the minority, continuing to play the role of principled fiscalizers. May there be more of them in Congress and may the new Speaker and leaders of the House appreciate their essential role and protect them from redtagging.

We hope for better legislative outcomes under a Speaker Velasco. We have worked with him on energy issues and he is definitely a forward looking and visionary policy-maker. He is also young and that is also a good thing. History will truly be made in the august halls of Congress when it becomes finally a House not of Lord but led by him to serve the interests of the Filipino people. – Rappler.com