Where does the military stand with Duterte?

Don’t worry, Mr President, we got your back.

This was one of the many online posts shared in the last quarter of 2016 by retired generals who not only support President Rodrigo Duterte but also constantly assure him of solid backing for anything he wants accomplished.

A formidable network of retired police and military generals volunteered for Duterte in the 2016 presidential campaign. Nearly all did their tour of duty in the Davao region. Nearly all benefitted from the largesse he distributed as mayor. Nearly all adhere to his quick-fix solutions to crime, and are immensely awed by how he can be both charming and ruthless, both a friend to communists and a violator of the very rights the rebels are espoused to defend, both a man who lives a Spartan life and a Don Juan who could hang out with women, and both a tough disciplinarian and a generous patron who gives them goodies on special occasions, visits them when they’re wounded, and protects them even when they’re wrong.

Duterte the commander-in-chief has no patience for details and planning, which are core to any security force. Where the soldier speaks in measured words, if at all, the President uses language as his instant weapon against people he dislikes and ideas he discards.

Duterte the commander-in-chief sees no wisdom in deliberation, preferring to act on instinct. In contrast, the military is seldom whimsical, rarely moving without a plan of attack – however flawed.

The commander-in-chief scorns the lumbering bureaucracy and its time-honored protocols; the military finds refuge in them.

It’s an odd relationship. Made more so by the top brass’ 6-year exposure to Benigno Aquino III, the president who loved drilling down to the last decimal point of a fighter jet’s cost and studying coordinates in a map during long briefings and powerpoint presentations.

Shooting from the hip, President Duterte has shooed away American troops from Mindanao, ordered the armed forces to occupy disputed territories in the Spratlys, and vowed to raise the Philippine flag there – only to take these statements back, or have his alter egos clarify them. Rather than scratch their crewcut heads over the Chief's incoherent pronouncements, the officers have learned to dance with them: they sit it out and tell the public that unless formalized, they’re not treating presidential outbursts as orders.

While the defense-military leadership, for example, refused to get dragged into the police’s war on drugs, they had to calibrate their position after the President abolished the anti-illegal drugs unit in the Philippine National Police and ordered the soldiers to get involved. The military agreed to create a task force of 500 men to join the effort from a distance – clearly a mere token to save the President’s face.

Indeed for the last 9 months, the military has been acting like the adult in this relationship. In the words of a proud retired general whose deputies are now at the helm: “They’ve shown so far that the AFP is not a ‘second-the-motion’ institution.” 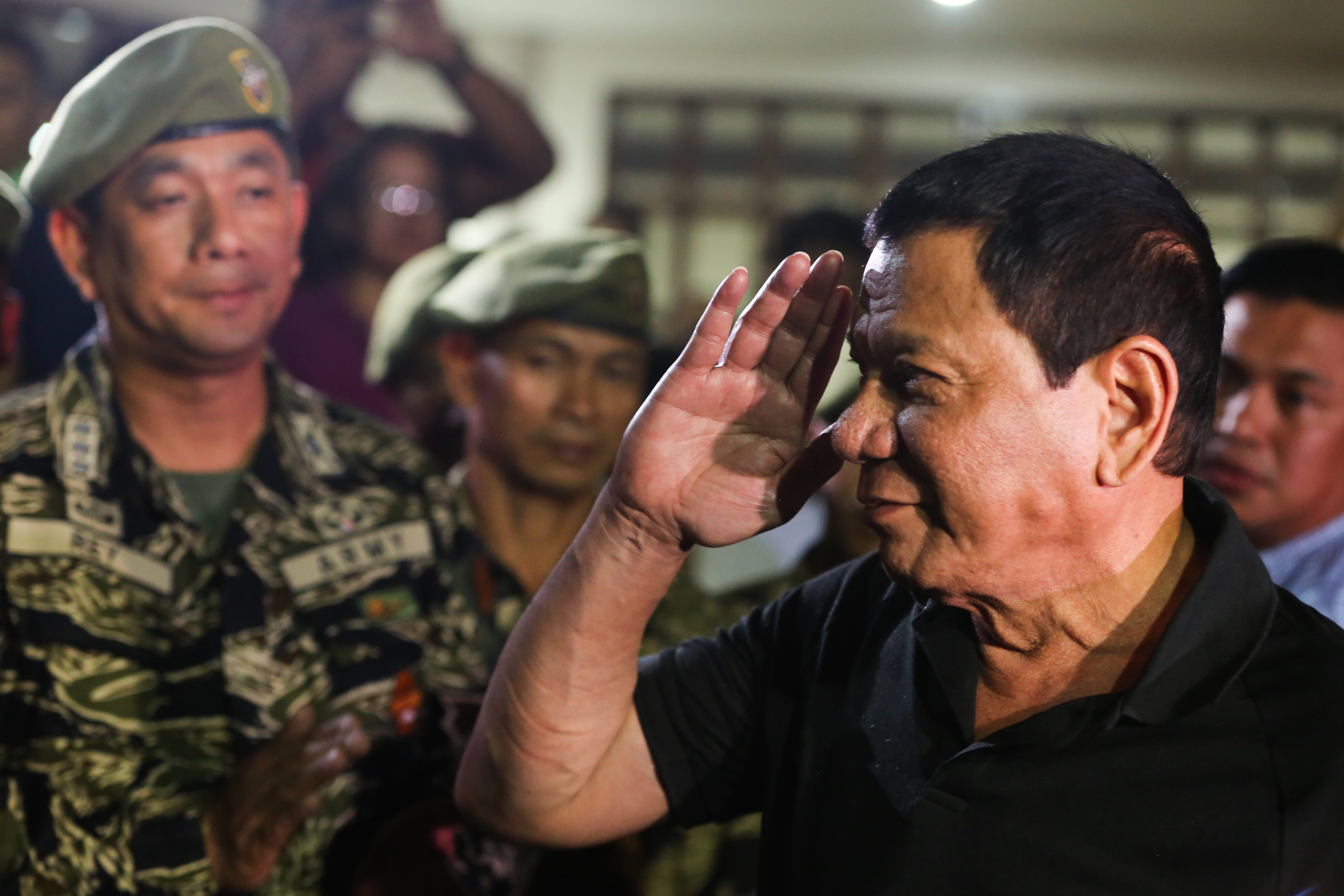 SALUTE. In this file photo, President Duterte visits the wake of slain Captain Clinton Capio at the Libingan ng mga Bayani in Fort Bonifacio on January 16, 2017.

Duterte in their hearts

In his first months as president, Duterte courted the armed forces aggressively, visiting camps practically every week and promising them more equipment and higher salaries.

For sure, the President knows where he stands among the enlisted men: in their hearts.

Why would it be elsewhere? He visits every wake of every slain soldier. More than handing out abuloy to grieving families, Duterte comforts them with his presence, listens to their heartaches, and promises them help.

The wounded are his priority as well, as he prefers visiting them in hospitals and listening to their battlefield stories than having to suffer the slow grind of governance in Malacañang.

“These visits matter to us,” an Army major told us, praising Duterte for “being authentic and real.”

Things are not as simple as that, however, between this strong leader and his battle-scarred troops.

Three key questions crop up nowadays in the context of Duterte’s unusual first year in office as president and commander-in-chief.

It is unwise to even mutter the word “destabilization” under a strong and popular president.

The last time we saw the military turn restless was under Gloria Macapagal-Arroyo, whose assumption to the presidency involved the armed forces – during the EDSA 2 revolt and the 2004 elections that she was accused of rigging with the help of loyal generals. When the military takes a role in a political transition, such as in the case of Arroyo or the coup-prone Cory Aquino, it’s like, in the words of former president Fidel V Ramos, a toothpaste coming out of a tube – one has to give it some time to settle.

In Duterte’s case, he won fair and square in the last elections; the military, save for his retired old friends strutting on the golf courses, had no hand in his victory.

But what could cause agitation in the future? A presidential mishandling of heart-and-soul issues for the armed forces: peace talks with the communist guerrillas; coziness with China vis-a-vis disputed territories; unrealistic deadlines in fighting terror; and favoritism in military promotion.

Duterte has so far played his cards well in the peace talks with the communist guerrillas. The President has deftly handled the warring sides, giving them just enough dose of love and punishment.

On our maritime dispute with China, he’s pretty much been deferential to the military despite his courtship of the Asian giant.

Promoting his favored officers in the military will take a bit of time, however, since Duterte’s friends have long retired from the service. But even then, the armed forces has proven to be a slow burn on this matter. If they could live for 6 years with a Voltaire Gazmin who overtly placed his favorites in key positions in the hierarchy, certainly they could live with another Gazmin in the future. For now, they’re in a good place with the professional tandem of Delfin Lorenzana and Eduardo Año.

But the quiet, methodical and efficient Año is retiring in October. Will the next chief be as firm and clever as he is? 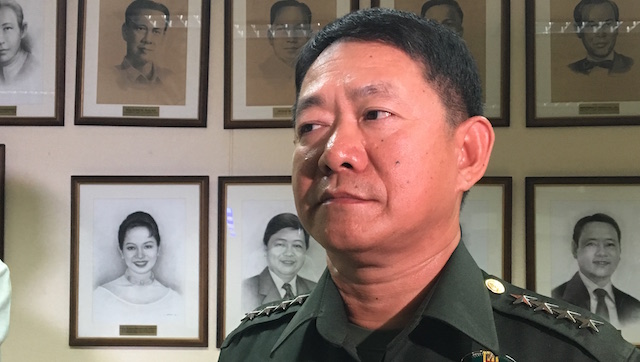 2. What if Duterte declares martial law?

The President will not declare martial law nationwide if he thinks and feels the military will be half-hearted about it. This is not the officer corps of a bygone era. It has 3 decades of indoctrination on civilian supremacy over the military (rule of law, non-partisanship, human rights). Its senior members entered the institution just as Ferdinand Marcos was on his knees, about to be booted out of power. They’re on social media, they’re connected with the rest of the world, they’ve seen leaders come and go.

And in the battlefield such as Sulu, they can see through the BS – because they know from the trenches that the Abu Sayyaf is ultimately not, cliché as it may sound, a military problem.

“How do you solve a problem like Sulu?” asked an Army colonel who, at the time of our interview, was with fellow elite forces who had just finished their assignment in the troubled island province. “Kill all politicians? Provide injectables to women so they don’t have to give birth to more Abu Sayyaf?”

They know the utter helplessness of the situation in Sulu, where, in the words of an Army captain, every soldier – “his fatigues, his boots, his equipment” – is a “walking peso sign” and where kidnappers are the biggest employers and providers in a land ravaged by corrupt politicians.

This is not to romanticize the AFP as an ultra-professional institution that’s beyond temptation or abuse. But Duterte will have to do more than visit dead soldiers’ wake to earn blind loyalty from the senior officer corps. “He can charm the AFP over time but not overnight,” quipped a former chief of staff as he reminded us of Hugo Chavez and the late Venezuelan leader’s tumultuous ties with his own army, which he eventually got to control. (READ: Duterte to military: I need you in leading the country)

For now, the military hierarchy has perspective that their commander-in-chief sometimes lacks. Left unchecked, however, and given the power dynamic in an institution that's mandated to obey orders, the officer corps will in due time learn to speak Duterte's language, embrace his shoot-before-thinking style, believe that the Abu Sayyaf can be crushed by brute force alone, accept drugs as a national security problem, and probably even be convinced that military control of the bureaucracy would finally make change come.

Between now and that time, however, is a lot of unpredictable factors under a constantly vexed presidency.

3. What would make the military withdraw support from Duterte?

The answer is a no-brainer: the civilians. Quite frankly, it’s fruitless to even think about it now. "We don't disagree that there's a problem, that he is somewhat a problem," says a general. "But he is the commander-in-chief."

The AFP, after all, has brought down two previous commanders-in-chief – Ferdinand Marcos and Joseph Estrada – and mounted botched mutinies against two female presidents: Corazon Aquino and Gloria Macapagal-Arroyo.

It waited for decades before it decided to move against Marcos. Already politicized, it didn’t have that patience with Estrada, whom it helped oust barely two years into his presidency.

But those were different times.

This is a leader and commander-in-chief who had seen those times but whose presidency has been shaped by the vast and fast changes of the modern world.

Will the military be swept away by the populist wave that's weaponized by an online movement? Or will the officer corps stay the course in its long, painful, and bloody road to reform?

Duterte should know the answer lies largely with him – every major step he makes and how Filipinos will dance to it. The top brass, aware of its place in history, will take it from there. – Rappler.com