[OPINION] A government, not a gang Facebook Twitter Copy URL
Copied
If we go by the President's previous behavior, it seems that the COA and the Senate may have tripped on something near and dear. And the more he flails, the more the 'connection' is established.

You’d think the President would be happy. The Commission on Audit (COA) had done the country a favor by identifying “inefficiencies” in the use of our scarce resources. You’d think he’d be grateful, because the Senate is doing its part to ensure that the funds Congress authorized for the pandemic were not being wasted. Instead, he’s on a warpath.

As deaths increase, he spends his weekly COVID-19 briefings lashing out at the COA and the Senate. Precious airtime that could’ve been spent discussing his plans to address an out-of-control pandemic is wasted on blabber about hair, weight, and briefs. This is quite perplexing. There is absolutely no reason for the President to rage at the Senate inquiry. He is, after all, supposed to be so averse to corruption that he can’t tolerate a “whiff” of it. Whatever these entities allegedly did with the billions funneled to them would not taint him.

And yet, he is fuming, prompting Senator Richard Gordon to ask, “Bakit kayo nagtatanggol?” A good point. Consider the entity concerned. It’s a private corporation. And based on testimony, one of its interesting qualities is that it can deliver supplies faster than Shopee, Amazon, or Lazada. Certainly, an outstanding business needs no presidential protection. And then there’s the mysterious “economic adviser” whose mere words can guarantee shipments in the millions. Whatever he is, he is not a public officer. Nor is he part of the Cabinet. It appears he is not even a Filipino. Who is he and why is the President so incensed? Some clues lie in the past. 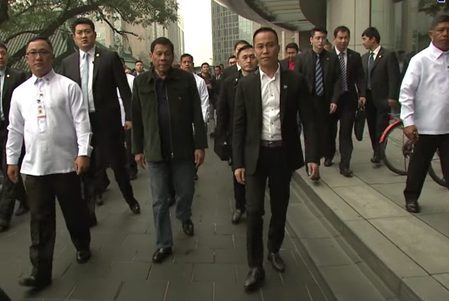 Begin with the incident where commissioners (Yes, Commissioners) were caught accepting bribes from a Chinese gambling operator. A scandal that reached the door of the highest offices in the justice department. Over the years, brazen acts of corruption have been reported in various departments. The public was periodically served “busts” involving low to midlevel officials – a fixer there, a clerk over here. Just enough to give justice to the anti-corruption narrative. For those a bit higher, an exit would be arranged, only to be “recycled” in a new public post a few months later.

The difference becomes truly noticeable the moment someone goes near the cordon sanitaire. This is when everything shifts to attack mode.

Take the navy frigates issue. It was a controversial matter where a decorated and well-regarded naval officer was summarily replaced for speaking his mind. Rappler’s incessant reporting incurred his personal ire. Trolls were unleashed and the full weight of the Philippine bureaucracy mobilized against the journalists. It also led to the curious incident of the President sending his entire Cabinet to the Senate just to vouch for his then- “special assistant.” Imagine that. Cabinet secretaries busy with running country mobilized to attend a Senate hearing that primarily involved none of them. The spectacle caused one senator to ask, “So who’s left to run the Palace today?”

Past incidents like this lend insight to the rage being directed at the COA and the Senate today. Because inquiring about the dealings of a private individual shouldn’t cause a Chief Executive to go ballistic. Yet ours is practically apoplectic. If we go by previous behavior, it seems that the COA and the Senate may have tripped on something near and dear. And someone needs to remind him that the more he flails, the more the “connection” is established. His illogical rage will be viewed as confirmation by a weary public.

It is possible that previous shows of force against the Senate emboldens him to use the same tactics today. However, the Senate of 2021 is not the same as the one in 2018 in more ways than one. Besides, this is not just another possible case of “corruption” the public may have grown accustomed to. Outside of war, there has never been so much death, sickness, suffering and plunder all at the same time. The country faced a pandemic that has killed thousands and destroyed countless businesses. Only an honest, systematic, and science-based response would help the nation survive. It was a once-in-a-lifetime challenge for any leader. Plunderers saw the opportunity of a lifetime.

Heal, not to be robbed!

The Senate hearings reveal that as we agreed to lock ourselves inside our homes, some used the situation to throw checks and balances out the window. Public money that could have saved lives was diverted. Doctors and nurses were told “there’s no money” while billions were funneled to privileged entities. Filipino enterprises were bamboozled with offers to help, only for the contracts to land on Chinese hands. And as we watched our jobs and businesses fail, a select group was busy buying sports cars.

Words fail to fully encapsulate this level of duplicity. The agreement was to sacrifice in order to “heal,” not to be robbed. Malfeasance in normal times is bad enough, but profiteering during a pandemic? That merits a special place in the afterlife. A distinction the law itself recognizes. As former Supreme Court spokesperson Professor Ted Te pointed out, crimes done during a pandemic suffer an “aggravating circumstance.” (The penalty is higher).

One would think that with these revelations, the President would be on the Senate’s side. Instead, what we have is a threat to halt government dealings with the Red Cross. He cannot be unaware that doing this during a pandemic endangers lives, Filipino lives. Yet it seems he is prepared to do so just to defend someone who isn’t even Filipino. What a bitter pill to swallow (especially for his diehard supporters) – to realize in such stark terms that our lives don’t matter, that they never did, and that we are bargaining chips in a game being played inside our leader’s head.

“I will not allow anybody to arrest you.” These are words one does not expect to hear from the Head of Government. It is, after all, supposed to be a government of laws, not men. But perhaps that’s the reality we are faced with. Five years of bending and twisting the Constitution and the Rule of Law. Half a decade of systematically corrupting and co-opting institutions. He has perfected the machine, so he doesn’t need to hide it anymore.

Fortunately, there is a larger reality that escapes his grasp. And that is the fact that the rest of us do have a say in the matter. That it is still our government, not of one man. That one can corrupt leaders but not an entire bureaucracy. That he may cow institutions but he can never conquer the people.

Our role in this democracy remains as long as we are willing to step up and fulfill it. And the starting point is to remind them of our system’s basic premise that may have been lost in these 5 years of ignominy: you run a government, not a gang. – Rappler.com

John Molo is a commercial law litigator who enjoys reading and learning about the Constitution and its intersection with politics. He teaches Constitutional Law at UP Law-BGC, where he also chairs the Political Law Cluster of the Faculty. He led the team that sued the Aquino administration and invalidated the PDAF.