[OPINION] Cry me a River Facebook Twitter Copy URL
Copied
'River is not the first victim of illegal counterinsurgency. There will be more.'

Might has no right to wave its guns in the courtyards of our grief.

We all need to share in the grief of the mother to sustain…the light we need to see the enemy in front of us…. Even if we only have words for tears.

The lyrics of this love song do not sing to what I feel. I am so angry, it brings tears to my eyes. What I feel is anger, raging anger at this government. It was Chel Diokno who said what the government did to baby River and her mother was not a matter of politics; it was simple inhumanity.

To analyze effectively, you have to mobilize cold, unrelenting, unemotional logic. I am letting go of logic to give way to rage. What this government did to River and her mother takes me from my head to the pit of my gut.

Take a newborn baby away from her imprisoned mother; keep her away when she gets sick. I do not know if River would have survived with the comfort of her mother’s embrace. She died alone in a hospital.

The government could have made up for this by showing simple human compassion in the wake for River. Her mother, Reina Mae Nasino, was granted a 3-day court permit to go to the wake. Her guards objected because they said they did not have enough personnel to go with her. Her visit was cut to 6 hours – 3 hours per visit.

I was stunned, seeing pictures of Nasino at the wake. Completely enveloped in a hazmat suit (she has no COVD), handcuffed. How could she kiss her dead baby? Receive condolences from her family?

Not enough guards for 3 days, but more than 20 surrounded the funeral parlor, intimidating people who wanted to express their condolences. Then there were 43 at the cemetery. At the funeral, the f***king guards grabbed River and rushed her to the cemetery to keep her away from sympathizers who wanted to march with her. River’s mother, Reina Mae Nasino, worked in a human rights NGO. Police raided her office in November 2019, probably planted a gun or two, and arrested her on the non-bailable charge of illegal possession of firearms. Pregnant at the time, she later delivered River, who was then taken from her.

As columnist Gideon Lasco put it: “Officially, the cause of death was ‘pneumonia,’ but she might as well have been murdered through the circumstances of her short life.” River was one of the more cruelly treated victims in the Duterte regime’s unrelenting counterinsurgency campaign.

Thinking he could control the New People’s Army (NPA) by giving them a share of power as he did in Davao City, Duterte appointed National Democratic Front (NDF) personalities to several cabinet and sub-cabinet positions. What he did not understand is that the NDF was not interested in “seizing state power” in Davao City; its ambition is to seize the national state.

Peace talks started early in Duterte’s term and reached an agreement on a formula for ceasefire, the heart of any peace process. Unwilling to give up its multi-billion peso budget, the military got in the way. Afraid of coups, Duterte meekly obeyed and canceled peace talks. 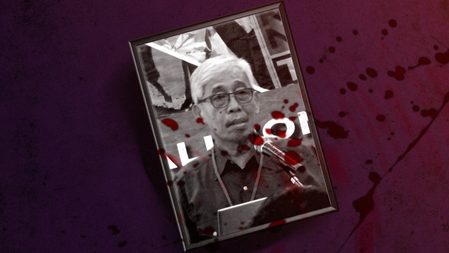 The military periodically says it will defeat the NPA soon. But in fact, like Duterte’s deadlines for his promises, the military keeps missing theirs. Because everyone knows that military victory is not within reach, the military cheats by going after an easier target: the open, legal, national democratic organizations.

Because it engages in armed struggle, the NDF is illegal. The government has the right to go after its armed apparatus with military means. But the advocacy of national democracy is not illegal. It is no secret that the NDF maintains open organizations. If the military can establish that these organizations directly support the NPA, they can legally go after them.

But most of these organizations do work that does not directly support the NPA. They organize the urban poor, farmers, and indigenous people; they do human rights work. Because the NDF is a secret, underground organization, it is admittedly difficult to trace links between the NDF’s illegal armed and legal organizing work. The military has no choice. It violates the law if it does not maintain the distinction. This is the crux of the issue. The military violates the law with impunity. It goes after legal ND organizations using time-tested military and police methods, planting evidence. It uses social media to spread fake news. It uses drug war methods to eliminate ND organizers through nanlaban excuses and extrajudicial killings using masked killers.

These violations have to be exposed even if you are not an ND sympathizer. It’s not just that the military and police do not distinguish between armed NPA combatants and legal ND organizers. They do not see the difference between the NDF and other progressive organizations such as Akbayan.

River is not the first victim of illegal counterinsurgency. There will be more. Military and police justify the killing of other children as “collateral damage.” Unlike the NDF, we do not aspire to defeat the military and police. But we will not stop fighting to hold them to standards of legality and humanity. We are spurred, sustained by our anger at River’s killing. – Rappler.com

Joel Rocamora is a political analyst and a seasoned civil society leader. An activist-scholar, he finished his PhD in Politics, Asian Studies, and International Relations in Cornell University, and had been the head of the Institute for Popular Democracy, the Transnational Institute, and the Akbayan Citizens’ Action Party. He worked in government under former president Benigno Aquino III as the Lead Convenor of the National Anti-Poverty Commission.