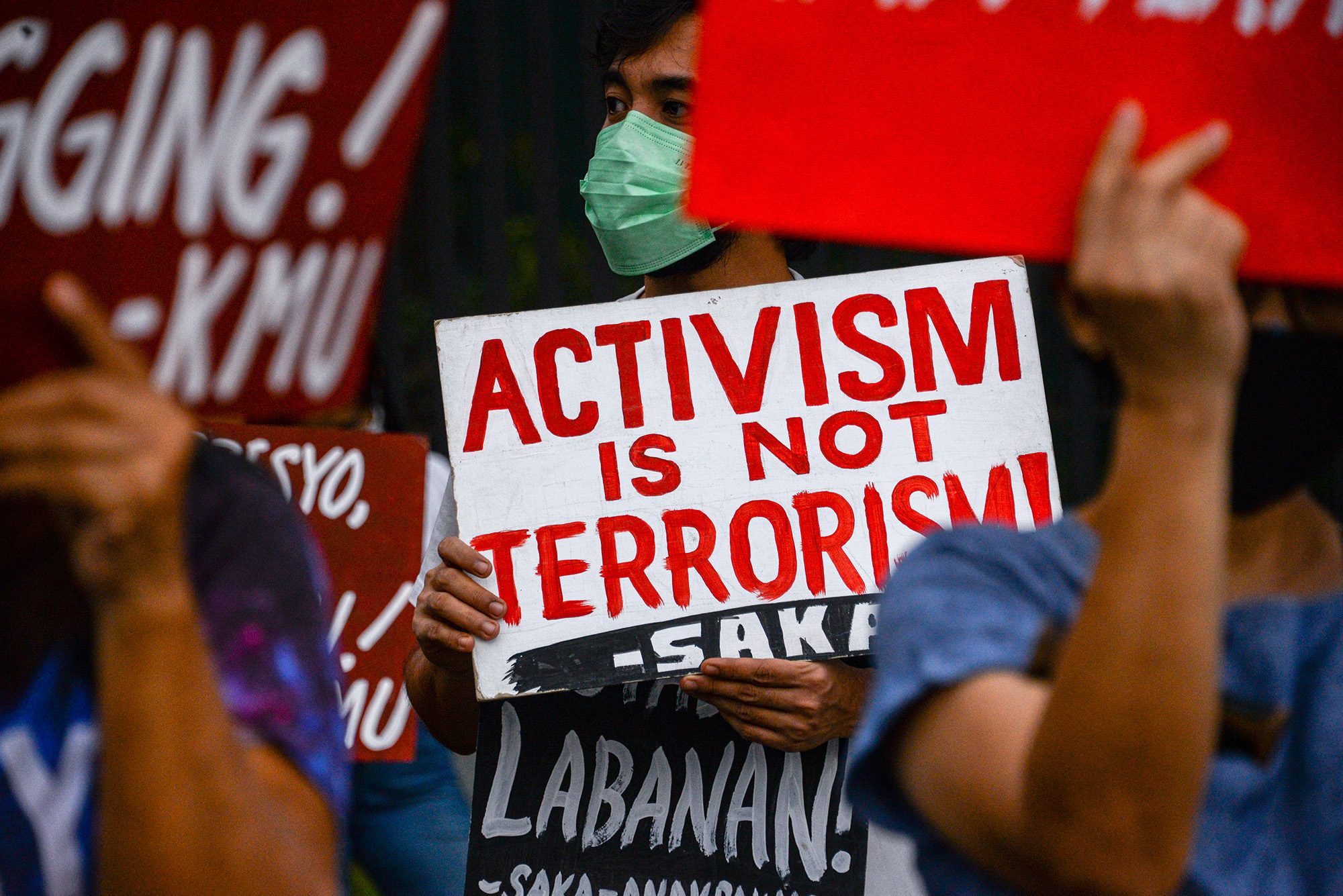 Activists from different progressive groups gathered in front of the Commission on Human Office in Quezon City on Tuesday, December 7, upon learning that the Supreme Court have voted for the Anti-Terror Law. Joining them are former Congressman Neri Colmenares, who is also running for a senate seat and Bong Labog, likewise a senatorial candidate. Photos by Angie de Silva/Rappler

In the first article of this series, the landmark decision of the Manila RTC denying the proscription of the CPP-NPA as a terrorism organization under the Human Security Act of 2007 (HSA) was discussed and dissected to discover how the presiding judge came to their conclusion. In this article, the ramifications and significance of the decision will be appreciated, specifically comparing the HSA with the Anti-Terror Act of 2020 (ATA). The article will address the dangers of red-tagging or policing activism in the name of the war on terror and other concerns of the democracy regarding legislation that seeks to proscribe terrorism.

It is important to parse out the distinction made by the Court between terrorism and political crimes. The Philippine jurisdiction and its penal laws have consistently made a distinction between “political crimes” and common crimes. The former are aimed at achieving a political purpose against a political order. Under the doctrine of People v. Hernandez, common crimes which are perpetrated in furtherance of the political offense, say rebellion, “are divested of their character as ‘common’ offenses and assume the political complexion of the main crime of which they are mere ingredients, and, consequently, cannot be punished separately from the principal offense, or complexed with the same, to justify the imposition of a graver penalty (People v. Hernandez, cited in Satur Ocampo v. Hon. Elhrem Abando, et.al.).” An act like killing is not a common crime like homicide or murder if it is committed in furtherance of rebellion. The killing assumes the political complexion of rebellion and becomes a mere ingredient of the rebellion. The accused can only be prosecuted for the political crime, the rebellion.

Red-tagging removes an important distinction by lumping together through broad and indiscriminate strokes all those who associate with activist organizations with those who espouse violence aimed at overthrowing the government, as a means to achieve the same.

Even judges have not been spared from this red-tagging, as we have seen in the statements of Lorrraine Badoy against Judge Magdoza-Malagar.

The nature of the CPP-NPA organization is political with political goals. The organization is by nature steeped in ideology. But does holding these ideologies automatically mean one is willing to commit terrorism acts?  Is this an encroachment on to the exercise of the free mind and the right to associate with above-ground organizations which espouse these political leanings in a lawful way?

In 1964, the Supreme Court of the Philippines saw the social dangers of red-tagging and enunciated in the landmark case of People v. Amado V. Hernandez that a belief in or active espousal of communist ideologies is not the same in actual participation in a conspiracy to overthrow the government by force. The Court there held “the act of indoctrinating and preparing its members for the revolution is not the revolution itself.”

There is a vast sea separating membership in legal organizations that share the ideals of violent communist groups and the groups which commit acts of violence themselves. This sea continues to exist even if it is proven that there may be some bridges that a portion of individual members choose to cross. Ideas are not intended to cause death or serious harm to any person, endanger a life, or create a threat to public safety. Without a physical act to accomplish this, how could an idea be capable and held accountable?

Lastly for this point, the Court appreciated the dangers of naming above-ground organizations as “fronts” for the criminal acts of the CPP-NPA. These organizations include political, activist, and civil society groups that have been essentially accused of willful association with what the State would describe as a terrorist organization. These accusations, though not penalized under the HSA, take on a more serious character under the ATA.

On October 1, the Philippine government, speaking through Press Secretary Rose Beatrix Cruz-Angeles and Justice Secretary Jesus Crispin Remulla, declared their intention to file another proscription case against the CPP-NPA under the ATA.

It is important to remember that the petition was resolved under the Human Security Act, which was expressly repealed by the Anti-Terror Act in 2020. There are several important distinctions between the two laws, which shall be discussed below.

Come now to the ATA, which does penalize recruitment to, or membership in, a judicially proscribed terrorist organization, association, or group. Section 10 of the ATA provides a fundamental departure from the HSA by penalizing mere association through membership and recruitment. Going back to the discussion of red-tagging and the established relationship between different organizations in the CPP-NPA recruitment process, what guarantee does an individual have to not be lumped in with the associations of their legitimate association?

In contrast to the HSA, the ATA has sharp teeth that can draw blood quickly. Under the HSA, a group, association, or organization was labeled a terrorist one purely through judicial proscription.

However, as seen by President Duterte’s 2017 designation of the CPP-NPA, the ATA expands these limits and to grant authority to the Executive, through the Anti-Terrorism Council (ATC), to automatically adopt the designation of terrorist groups made by the United Nations Security Council. 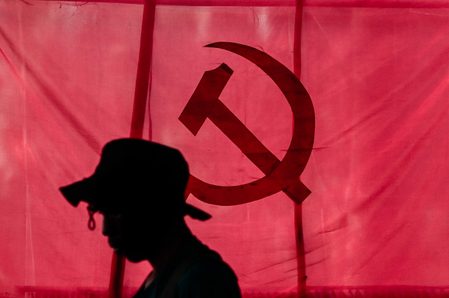 The power of designation grated the ATC was originally broader, but the Supreme Court of the Philippines in December of last year limited its powers by striking down as unconstitutional the ATC’s ability to designate terrorist groups upon the request of other countries or upon determination that it meets the relevant criteria of the United Nations Security Council. Still, these expansions outside of judicial proscription pose a danger, specifically when coupled with the other “innovations” of the ATA which will soon be discussed.

Firstly, the HSA included the crime of rebellion, punishable under Article 134 of the Revised Penal Code, in the enumeration of acts which may constitute the crime of terrorism, if met with the qualifications discussed in the previous article in this series. To quickly reiterate, that is that it causes widespread and extraordinary fear in the general population of the archipelago for the purpose of coercing the government into accepting an unlawful demand. The difference here may actually weaken the case of the government, if it should choose to file another one. The definition of terrorism under Section 4 of the ATA, which expressly repealed Section 3 of the HSA, is more in line with the academic definition of terrorism – the creation of an atmosphere of fear without the intent of wresting power from the constituted authority of the government.

To reiterate, even if the courts do not proscribe the CPP-NPA, or any other accused group, as a terrorist organization, the Anti-Terrorism Council established under the ATA is empowered by Section 25 of the Act to designate the same as such.

Secondly, terrorism under the ATA no longer defined on the basis of predicate crimes as defined under the Revised Penal Code and other special laws. The updated definition of “terrorism” in the Philippine jurisdiction is through “acts,” regardless of their stage of execution, which are committed by any person within or outside of the Philippines.

Lastly, the ATA allows for the label of terrorism to attach to individuals for committing the acts enumerated under Section 4 of the ATA, if conditions are satisfied. Membership is both integral and dispensable for the ATA. Even without performing any of the acts enumerated in the ATA, mere membership in and recruitment to a proscribed organization already merits a penalty.

The danger of membership without any act committed by the individual being equated to terrorism cannot be understated. As previously discussed, the structure of the recruitment system of the CPP-NPA involves levels of organizations with varying legality. The distinctions between activists and possible terrorists can be blurred with little to no consequences for the government as the safeguards to prevent wanton accusations have been removed. Those tagged as suspect can be held for longer, on lesser suspicions, and in the end if vindicated, will receive no reparations for their suffering.

If another case was filed against the CPP-NPA under the ATA, would the next petition succeed by learning from the decision of the Manila RTC? How many cases can be expected to be filed under the ATA that lack the years of preparation and mountainous evidence presented in the ultimately unsuccessful petition, simply because there are fewer consequences for the accuser?

Clearly, we are standing on the precipice of a more slippery slope. There is a distinction between political rebels, activists, and terrorists that should not be erased from our penal statutes, lest we risk losing fundamental freedoms like the right to redress our grievances against the government, to organize, associate, and speak truth to power. – Rappler.com