[OPINION] 5 days till D-Day: Have we failed as journalists? “Communication which does not lead to a new action is not communication – it is merely the abortive presentation of new social ideas or the monotonous transportation of old ones.”

When I chanced upon this line by controversial American journalist Norman Mailer in his essay “Of Lies, Power, and Obscenity,” I wondered: What have all our writing and exposés achieved if the center of power falls into the hands of the dictator’s son? I say this at the risk of painting the next administration as obscene, what with lies and power sleeping in the same bed and, in a foreplay of one bad decision after the other, ruling our lives for the next six years. If vanity governance does not offend you, then you’ve not read the Marquis de Sade.

The initial supposition, of course, is that Norman Mailer, being the Norman Mailer, is all-knowing (despite having six wives (one of whom he stabbed) and a bevy of mistresses). If he is, to some degree, then would it be accurate to think of ourselves – writers and journalists, most of all – as failures? A muddy heap of digitally-bruised crash-and-burns who are not even worth the space our words were printed on?

Pulitzer Prize-winning Filipino journalist Manuel “Manny” Mogato seems to think so in a noonday Facebook post on May 2, at least to the degree that journalists “did little to stop it,” referring to a possible Marcos presidency. “We acted late. We failed. We failed big time.”

“The media cowered in fear under Duterte and did not make enough push back until early this year when they courageously banded together to launch a fact-check activity. But it was too late, the disinformation has taken root and majority of the people had believed in the lies and untruth about Marcos […] We share the blame if the Marcos family will be able to claw back to power.”

Part of this belly-up, according to Mogato, is the fact that “majority of newspapers and broadcast networks are controlled or owned by people who are either related to the Marcoses or have close relations with the family.”

This has created a structural and moral weakness that has marked the journalist’s job as something broken at the seams, if not altogether irrelevant.

When I first read Mogato’s post, it tugged at old wounds. I resented that a journalist of his caliber would post something so untrue of a profession populated by good, hardworking men and women. I know of several colleagues who were there at the beginning, pushing back against Rodrigo Duterte’s threats and misogyny prior to his oath of office.

I also found Mogato’s argument a tad too simplistic. In my view, the spread of “fake news” is fueled by a complex thread of denominators – social, economic, cultural, and technological – that are hard to track and define, let alone solve in so brief a time. In response, I wrote in a separate Facebook thread a list of several factors that may have contributed to the cultivation of lies, like corruption, a revenue-driven digital landscape, and the fable that journalists are saviors of the world. The myth of being saviors, however grandiose a calling, hardly gives the profession any justice.

However, the more I thought about it the following night, the more Mogato’s words made perfect sense. More so the need to band together, which I have raised as early as 2013 in my book, Blood Republic. However, it begs the question: was it fear that prevented us or was it the competition? I don’t believe the former any more than I believe in ancient aliens, but the latter seems more plausible.

Competition runs deep in the media profession, more so now that revenue has decided to migrate from traditional to online news sources. Where old-school journalism breaks the story the next day, digital journalism breaks the story within minutes of gathering the facts. We are now in competition with time, ourselves, and algorithm-fed technology. The murders under Duterte were so fluid, lies so frequent, that it left little time to band together in the face of a common terror.

I have been told of instances where owners of media companies had allegedly struck the gavel on who must be exposed and who must not be. If at all fear played a role in media’s failure, it was the owners with ties to Duterte and Marcos who felt it first. The closure of ABS-CBN provided the trigger. While in individual capacities, journalists of different media outfits banded together eventually, some still choose to work in isolation, as if press freedom – a corollary of everyone’s right to free speech – is not under the most serious threat.

Under a Marcos Jr. presidency, this threat could exponentially get worse. But the question looms: have we failed based on Mogato’s view? Theoretically, yes, that is, if Marcos Jr. wins in the 2022 polls. But Mogato himself insists that the job does not end with a Marcos in the Palace. If anything, it could spur a whole new journalistic triathlon, and not a moment too soon.

Failing to stop a Marcos presidency – assuming we have clean and honest elections – should not deter the journalist from doing what he or she does best: gather the facts, tell the story. We have more reason to do this if elections prove to be a fraud, or if Marcos does another Ferdinand.

Not only Marcos Jr., but whoever wins will spark an even greater need to be extra vigilant. This time to use technology to journalism’s advantage. To do fact-checks as a team. We could go a step further by exchanging information. Choosing cooperation over competition in a world swiftly being divested of facts may just be what journalists need to overcome the politics of disinformation and division. It’s not too late to raise the profession to the level of principle. 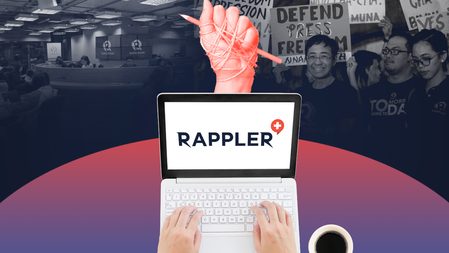 True failure comes when we refuse to learn from our mistakes. But even such mistakes cannot stop a journalist who, after licking his wounds, decides to hit the ground running. Our raison d’être for speaking out – the facts – is never crippled by failure.

Why? Because now the road is clearer than when we first ran the race. – Rappler.com