In the Catholic liturgical calendar, the end of the Christmas season, an extended celebration in the Philippines, ushers in Ordinary Time. This marks the period when Jesus began his public ministry to carry out his mandate of salvation. “Ordinary” suggests the humdrum, the commonplace, the insignificant. But the tasks to which Jesus immediately applied himself in fulfillment of His mission included non-trivial tasks, such as cleansing lepers and healing the sick, which should resonate with us in our continuing struggle with COVID-19.

It also included driving out demons.

Fr Bill Abbot, SJ, acknowledged in a recent homily that people in a pre-scientific age might have attributed to demonic invasion illnesses that perhaps scientists would later diagnose as viral infections. Still, which is easier to claim and, by a mere word or touch, to effect: expelling a devil or expelling a virus?

In a talk on driving out evil spirits, Bishop Robert Barron of Los Angeles reminded the audience that God created creatures both visible and invisible – like angels, who were superior to man in intelligence and power. Also endowed with free will, devils were angels gone bad. Their combination of superior faculties and malicious intent, as Bishop Baron noted, poses a potent danger to humanity. The Bible recognized the Devil as an active force in human life and identified it by many names and by their effects.  Bishop Baron focused on the 4 most common manifestations, which were indicative of the damage they caused.

The Devil was the Father of Falsehoods, peddling all manner of lies and encouraging their propagation. He was the Architect of Disunity. God gathers people into communities, assuring them of His Presence when two or more people join together in His name. The Devil undermines unity, breaking bonds among friends, families, institutions, countries. He shatters and scatters, causing confusion and conflict between individuals and among communities.

[OPINION] The need to reinterpret faith during the pandemic 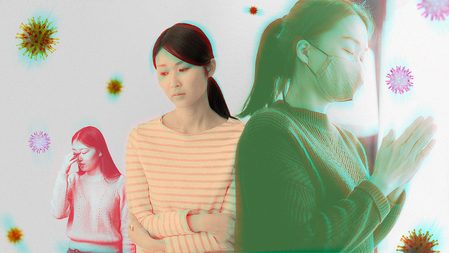 The Devil is the Denouncer, the Destroyer of Dignity. While God affirms, the Devil accuses, provoking people into pointing blame at each other, delighting in demeaning and demonizing individuals and groups of people by labeling them inferior and denying them their unity because of their gender, ethnicity, their poverty, or their politics. Where God gives life, the Devil is the Deliverer of Death, celebrating senseless slaughter. In the words of John the Evangelist, the Devil is “the Murderer from the beginning.”

Bishop Baron offers a different perspective in scanning the global scene. In the opening days of 2021, the new normal the world was hoping for did not appear much different from the calamities and crises of 2020.  There was still a pandemic of fake news, crimes and insurrection, ethnic and gender discrimination and violence, and, despite vaccines, a resurgent COVID-19.  Despite this, the Bishop offers hope. By the Cross, Christ has already demonstrated God’s power over the Devil and has given us the means to assert His victory. But the faithful must still muster the will to do battle.

It begins, as the Bishop warns, by recognizing the collective responsibility to undertake the not-ordinary task in ordinary time of discerning and resisting the demons dwelling among us. By their signs, they shall be detected as those who promote lies, disunity, violence, and death. – Rappler.com