[OPINION] In defense of the Lumad schools The following piece is Part 1 of a two-part series. You may read Part 2 here.

On May 26, the House of Representatives’ Committee on Human Rights conducted an inquiry into the February 15 raid and mass arrest of Lumad evacuees in Talamban, Cebu.

During the hearing, representatives of the National Task Force to End Local Communist Armed Conflict (NTF-ELCAC), Armed Forces of the Philippines (AFP), and Philippine National Police (PNP) raised several charges against Lumad schools. These charges are nothing new. In fact, the NTF-ELCAC has relied on the endless repetition of these same allegations to justify not only the illegal raid and mass arrest on February 15, but also the closure of more than 200 Lumad schools in Mindanao as well as the commission of other human rights violations against teachers, students, and supporters of Lumad schools.

As lawyers working with the children’s rights group Save Our Schools Network (SOS) and the Lumad community and bakwit schools that work with SOS (collectively, “the Lumad schools”), in particular the Salugpongan Ta’Tanu Igkanogon Community Learning Center, Inc. (STTICLCI), we summarize the response of the Lumad schools to these allegations. In Part 2 of this article, we will elaborate on the misconduct and legal violations of government agencies that were exposed in the congressional hearing.

1. The Lumad schools are established, organized, operated by, and/or affiliated with the CPP-NPA-NDF.

Since their establishment, the Lumad schools have always sought partnership with the Department of Education (DepEd), coordinated with local government units, and complied with all government requirements for the schools to be able to legally operate.

FALSE: Lumad is a word made up by the CPP-NPA-NDF 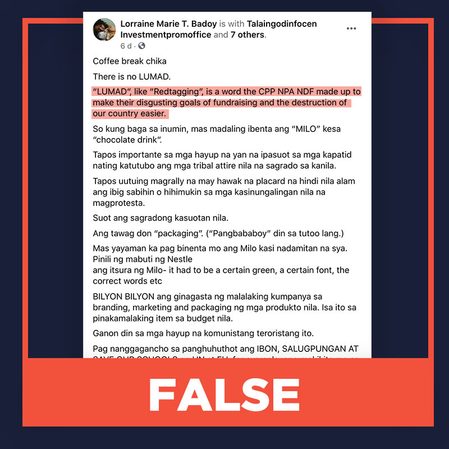 2. The Lumad schools teach their students to (a) use and dismantle guns and (b) in general, to rebel and commit acts of violence against the government. Children who graduate from elementary are made to become child warriors. All students eventually join the NPA.

The Lumad schools faithfully adhere to the DepEd’s K-12 curriculum and Indigenous Peoples Education guidelines. Their curricula generally consists of programs in literacy and mathematics, science, social science, technology and livelihood education, sustainable agriculture, and indigenous arts and culture. Their students are taught to be intelligent, independent, peace-loving, and productive members of society.

3. The Lumad schools use children as protesters, bringing children to join rallies in Manila and other cities.

While the Lumad schools’ students have joined rallies, they have always done so of their own free will and with the consent of their parents and guardians. The schools do not force their students to attend or join rallies.

In fact, to insinuate that the Lumad schools “use” their students for rallies is to suggest that the students lack the ability to discern matters affecting themselves and their communities, and are unable to choose to exercise their political rights of their own accord.

The schools do equip their students with the knowledge and capacity to become effective constituents in the local and national levels. Rallies are one way by which citizens can peacefully engage the government and take part in the development of the country. Furthermore, all Filipino citizens have the constitutional right to peacably assemble and air their grievances. If students want to join rallies, the schools will not prevent them from doing so.

4. In Lumad schools, children are separated from their parents and cannot go home without the permission of their teachers. Parents are not informed of the whereabouts of their children.

Because students come from different communities that can be far apart, Lumad schools are often boarding schools. This helps students to save on transportation, housing, and food costs.

It is not true that students cannot go home without the permission of their teachers. On the contrary, the Lumad schools’ policies generally simply provide that students can only leave school premises if they are fetched by their parents and guardians. This policy was enacted for the safety of the children, and is no different from similar policies enacted by many schools in the Philippines.

As of writing, all the minors that were in the UP Diliman bakwit school have been turned over to their parents. The pandemic and the harassment by government agencies necessitated this step.

5. The Lumad schools are not compliant with DepEd requirements. The schools have not obtained FPIC from the IP communities. The schools do not have Learning Registry Numbers.

This allegation is addressed particularly against STTICLCI, which was closed by DepEd Region XI in a Resolution dated September 5, 2019.

Before 2019, STTICLCI had always successfully complied with DepEd requirements and had been regularly issued permits/certificates of recognition by the DepEd. In 2019, however, DepEd Region XI introduced additional requirements that were not required in previous years, including the requirement to obtain an updated FPIC (Free Prior and Informed Consent). The schools were given only a month to comply, despite the fact that many of the additional requirements could not be realistically obtained within that time period. The compliance period was also contrary to DepEd rules which state that schools must be given a reasonable period to remedy their deficiencies (DepEd Revised Manual of Regulations, Section 34). While STTICLCI exerted best efforts to obtain these additional requirements, it was not able to do so within the DepEd’s timeframe.

Although the updated FPIC is still in process, the schools have always operated with the permission and support of the IP communities that they cater to. Each STTICLCI campus is established after meetings and consultations with community leaders and members on the sitio, barangay, and municipal levels, and following strict coordination with the affected communities.

STTICLCI has Learning Registry Numbers (LRN), and has had these ever since the LRN system was institutionalized by the DepEd in 2015. While technical issues may sometimes arise in connection with the LRN system, as in any other school, STTICLCI has always coordinated with DepEd’s provincial offices for the speedy resolution of these issues. 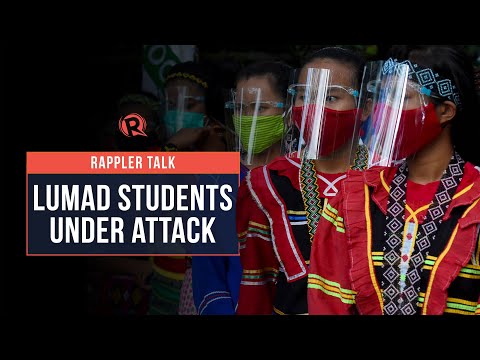 6. The IP communities themselves want the schools to be closed.

Many people from Lumad communities have been forced, bullied, and coerced into denouncing the Lumad schools. Some have even been detained against their will, or have had their children taken away from them by the government.

Despite these conditions, many Lumad parents and children continue to support the schools. The Lumad schools receive a great deal of support from the communities they operate in.

If there are people in Lumad communities who do not wish to send their children to currently existing Lumad schools, the DepEd or other private institutions are of course free to establish their own schools to provide Lumad communities with more options. That some people prefer one kind of learning institution over another should not be used as a ground to close schools that meet the requirements of the law. There is certainly more than enough room for different schools to operate and cater to Lumad communities. – Rappler.com