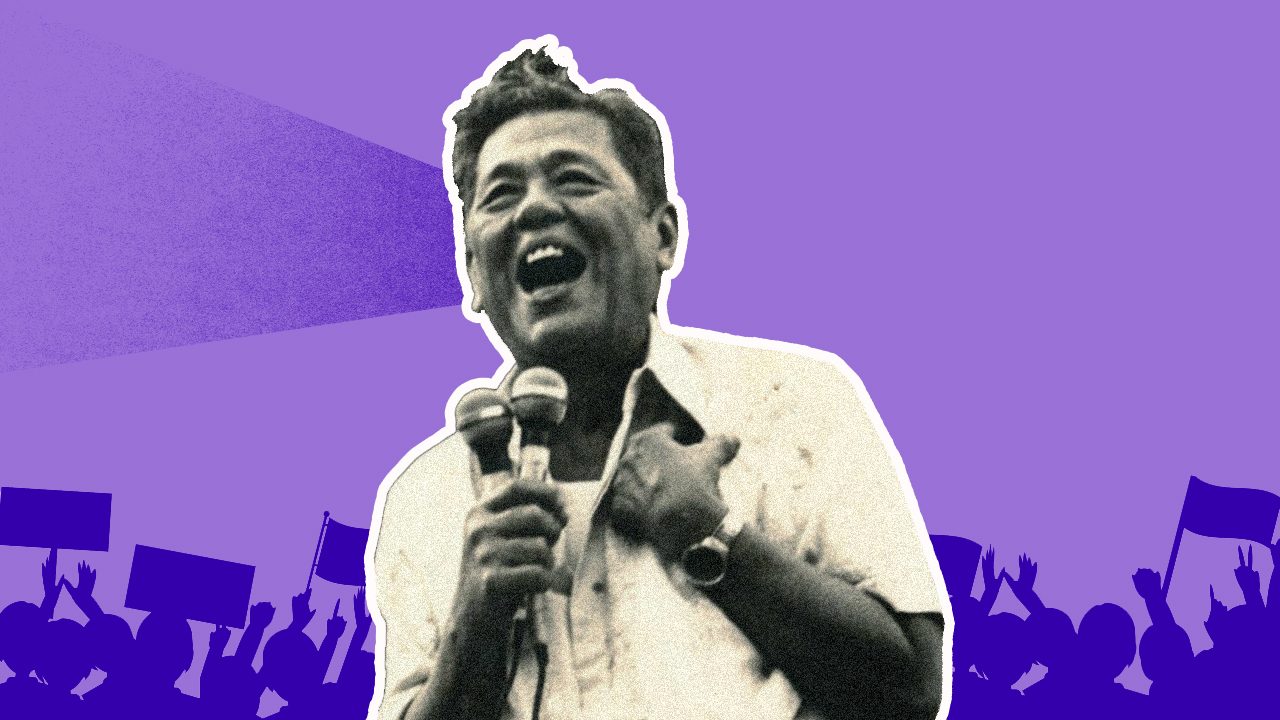 Facebook Twitter Copy URL
Copied
'As our people prepare to choose a new set of leaders in May 2022, it may be good to pause and reflect on the kind of leadership we once had'

(As our people prepare to choose a new set of leaders in May 2022, it may be good to pause and reflect on the kind of leadership we once had.  In this month of February when we recall the 36th anniversary of People Power, we likewise commemorate the centennial of Jose W. Diokno’s birth on February 26, 1922. I have updated a piece I wrote about Ka Pepe which originally appeared in Rappler and later formed part of the book, Courage!, published by the Jesuit Communications Foundation in 2018.)

Jose W. Diokno defined courage for an entire generation who lived through the long nights of Martial Law.  He embodied the resistance to dictatorship, he upheld human rights in season and out of season, and he led the struggle to oust the US military bases from Philippine shores.

He did so by practicing a brave brand of principled politics, by taking a stand without regard for his political fortunes or personal safety.  He spoke out eloquently and tirelessly in the halls of Congress, in the streets and the town plazas, throughout the country and abroad.

As we commemorate the Diokno centennial, Ka Pepe stands guard, so to speak, at the heart of the headquarters of the Commission on Human Rights (CHR), an institution whose precursor, the Presidential Committee on Human Rights, he once led. There, the bronze figure of the staunch nationalist, the human rights advocate and defender of democracy, the indomitable Jose W Diokno, graces the grounds of the CHR, sculpted by Julie Lluch. 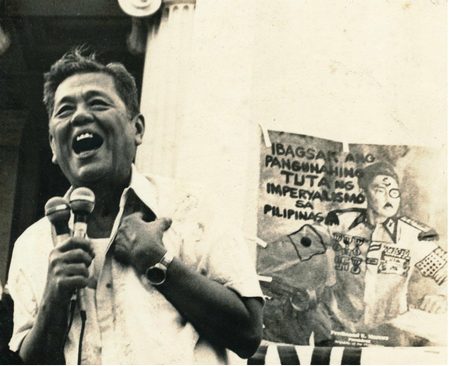 Memories of Ka Pepe Diokno abound in my mind, the more memorable ones exemplifying his courage.  (I had returned from work at the International Secretariat of Amnesty International in 1981 and spent time with Ka Pepe in the seminal organization that he led called, Kaakbay, till his death in 1987. The time I was privileged to work with him deeply influenced my views on the imperative for a brave brand of politics.)

I remember Ka Pepe soon after his release from jail as he stood his ground strong and unbowed.  He spoke firmly about the need to resist the excesses of Martial Law in the town plazas of the Southern Tagalog and Bicol regions.  I recall that in one particular incident in Sorsogon, Ka Pepe spoke while the crowd was surrounded by soldiers carrying their threatening armalite guns.  Unafraid, nothing seemed to deter or discourage him.

I remember Ka Pepe leading a rally against Marcos’ efforts to further perpetuate himself in power in Davao City’s main plaza in driving rain.  It was here in this city after the vast gathering that I first noticed that he would cough incessantly, his booming baritone struggling to be heard above the din.  He was in the first stages of his battle against lung cancer, and he would not let that deadly disease deter his crusade.

I remember Ka Pepe standing outside the Blue Eagle gym at Loyola Heights where a gathering of anti-Martial Law activists had come together to forge an alliance.  The meeting took place but the alliance did not materialize.  It disappointed but did not discourage him, and he continued in his struggle through a small but valiant organization he led, Kaakbay.

I remember Ka Pepe struggling to contain his tears as we heard about the massacre of peasants at the foot of the bridge Mendiola on January 22, 1987, which led to his resignation as head of the human rights committee and as the government’s peace czar.

I had come to consult him during the last stages of the campaign to seek the citizens’ approval of the 1987 Constitution in a referendum then scheduled just two weeks after on February 2.  He had given his life to causes that totally consumed him, and he was at the end of his physical powers but there was still fire and fight in his eyes.

Fast forward to 199I, I deeply felt Ka Pepe’s absence on the evening the Senate voted “No,” forbidding the retention of foreign military installations in Philippine territory absent a treaty which sealed their fate. The Senate President Jovito Salonga in the presence of the Tañadas (the father Lorenzo, a lifelong advocate, and son Bobby who sponsored the initiative on the Senate floor) cast the deciding vote that triggered jubilation among the people who waited for the outcome outside the old Congress.

The Anti-Bases Coalition (ABC) which he had founded had joined the thousands who had come to celebrate the historic event.  But, Ka Pepe was no longer around to witness the fruits of his lifetime’s work.

I remember Ka Pepe constant companion, his wife Nena, always caring, equally vocal and vigilant, with a fan in one hand and a cigarette in the other as he traveled with her in campaigns or lecture tours, to defend litigants in courts or visit political detainees, to listen to indigenous peoples or speak with businessmen, to address students at the steps of the Arts and Sciences building at UP Diliman or to urge the boycott of the rigged Batasang Pambansa elections all over the provinces.  He was tireless, indomitable, and fierce accompanied by a partner who was rock-solid in step with him. Ka Pepe was a Senator for two terms, from 1963 onwards.  His second term was cut short by the declaration of Martial Law, which in an instant led to his detention in Camp Crame, then Fort Bonifacio and later solitary confinement in the far-flung military camp in Laur, Nueva Ecija.  He was the only other political dissident accorded the honor of solitary confinement – the other, his colleague in the Senate, Ninoy Aquino.  For two years, Ka Pepe survived the rigors of the solitude and isolation of jail while keeping his mind sharp and alert.

He had been designated a Secretary of Justice in President Diosdado Macapagal’s cabinet for a little more than five months before he tried to break corruption in high places by indicting Harry Stonehill, the cigarette magnate who had bribed officials in high places.

When Diokno refused to condone a convenient arrangement that allowed for Stonehill’s exoneration and exit from the country, Ka Pepe was forced to resign.  He would rather step down from his post than be complicit in corruption.

In the end, Diokno was defined by the crusades he fought.  He raged against violations of human rights; thus, soon after his release from jail, he founded the Free Legal Assistance Group (FLAG).  He did not run away from a fight and consistently argued against the presence of US military bases on Philippine soil.

He never accepted the rationale for Marcos’ Martial Law and resisted the dictatorship till the end, without a hint of compromise.  He defended the common man in the law courts and in the halls of the legislature, in the plazas and in school assemblies, throughout the country and abroad.

He defended the unjustly persecuted such as Fr. Niall O’Brien, an Irish Columban missionary, and his companions (called the “Negros Nine”) who were set free after Diokno’s brilliant defense had scuttled the lies and the lack of logic in the trumped-up murder charges leveled against the Negros Nine.

Diokno left a singular legacy: he pioneered principled politics, a new way of doing politics that was honorable and unafraid; bold and brave, giving assurance to those who were advanced in age and providing inspiration and encouragement to the youth of the land.

Diokno defined courage for a generation that resisted Martial Law in the Marcos years.  Diokno defied the dictatorship that imprisoned him and the designs of the imperial power that supported the dictatorial regime. In this day and age, as we commemorate the centenary of his birth, Diokno lives on!

We remember his ideals and his dreams as we approach the decisive days of May 2022, and we celebrate his deeply held belief that it is worth building “a nation for our children.” – Rappler.com

Ed Garcia is a member of Kaakbay, an organization that Ka Pepe Diokno founded in the difficult days of Martial Law in the ’80s, and one of the framers of the 1987 Philippine Constitution.