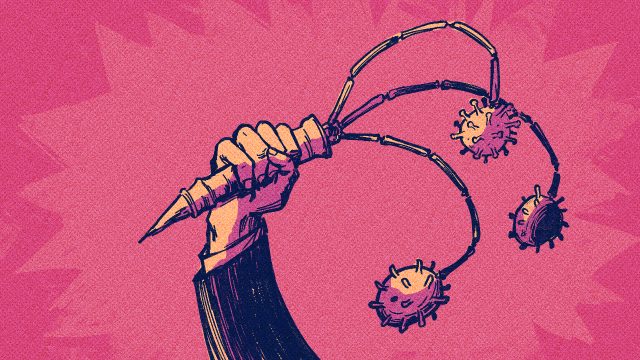 Facebook Twitter Copy URL
Copied
'The impact of the crisis has been worsened...by employers using the pandemic as an excuse to run away from their obligations to workers'

With the so-called “NCR Plus” entering the second week of ECQ Season 2, some 11 million formal and informal workers in Metro Manila, Bulacan, Cavite, Laguna, and Rizal are, according to the 2020 Labor Force Survey, once more facing distress. While the government has announced that it will provide 22.9 million low-income Filipinos in the area with P1,000 each, the epic catastrophe of the Duterte administration’s COVID response remains highlighted by the re-imposition of the ECQ and the sharp recession in the country, the worst in Southeast.

Still, as revealed in case studies by the UP Center for Integrative and Development Studies’ Program on Alternative Development, the poor are not simply victims of a failed government response, but exercise agency given their repeated experience of delayed and insufficient aid. Empowered grassroots communities are capable of organizing their own plans without waiting for dole-outs. The labor movement has also formulated its own COVID response.

The impact of the crisis has been worsened, according to worker informants, by employers using the pandemic as an excuse to run away from their obligations to workers.

In the Mactan export processing zone, 4,000 workers were retrenched in the “mother of all layoffs.” In two apparel factories, union officers and members were laid off in a bid to bust labor unions. A glass factory in Laguna declared a permanent shutdown but continued to operate on a skeleton workforce. The company was accused of busting the union and refusing to negotiate the collective bargaining agreement (CBA). Another garment factory in Cavite was shut down without paying workers their last wages and other benefits, including separation. In the Bataan export processing zone, two factories did not pay salaries on time. Informants in the labor movement also aver that a university and a geothermal power plant refused to implement CBA provisions, using COVID-19 as an alibi. These are just a sample of the abuses that employers are inflicting on workers amid the pandemic. The Department of Labor and Employment (DOLE) released several issuances during the pandemic that provided employers with loopholes. Labor Advisory 17 allowed employers to cut wages and benefits. Department Order (DO) 213 suspended the acceptance of complaints from workers and even the filing of certification elections. And DO 215 extended by another six months the allowable forced leave for workers.

Workers did push back against employer misbehavior but resistance was nipped in the bud. A workers picket line in Cavite was dispersed on Black Friday night of 2020. Five organizers of a rally of retrenched workers at the Mactan export zone were arrested. Foodpanda riders who were staging a protest  were also harassed by police. In all these instances, police have used the lockdown as a weapon to clamp down on dissent.

Against the backdrop of police impunity, state indifference, and employer abuse, the labor coalition Nagkaisa forged a response that can be encapsulated in the tagline “Manggagawa naman,” as it demanded that working class and not business concerns be a priority. Nagkaisa is a coalition of some 40 labor organizations, including the Trade Union Congress of the Philippines, Federation of Free Workers, Sentro ng mga Nagkakaisa at Progresibong Manggagawa (SENTRO), and Partido Manggagawa (PM). Formed in 2012, Nagkaisa has been in the frontline of the campaign to restrict the practice of contractualization.

At the start of the lockdown and as part of its demand for “ayudang sapat para sa lahat,” Nagkaisa asked employers to grant paid quarantine leave, and for the government to provide P10,000 in subsidies for all workers, formal and informal. When the lockdown was eased in the middle of the year and workers started streaming back to work, Nagkaisa called for “balik trabahong ligtas,” which meant mass testing, free personal protective equipment, hazard pay, and insurance coverage for workers who contract COVID. Government however paid scant attention, as restarting the economy was a priority over the occupational and public health and safety issues.

At least 8,000 workers displaced during ‘NCR Plus’ ECQ Not all of Nagkaisa’s demands fell on deaf ears though. DO 213, which suspends the dispute resolution mechanism, was eventually supplanted by DO 214, which reinstituted the complaints mechanism and the filing of petitions for certification elections. A DOLE proposal to defer the payment of 13th month pay to workers was also later recalled. But clearly the effectiveness of Nagkaisa’s advocacy was diminished by the inability to combine lobbying with mass actions due to the lockdown restrictions.

Nagkaisa shifted its activities online in consideration of health protocols. It had a successful Labor Day online rally with several thousand participants. Meetings and education continued using Zoom and Facebook. With the relaxation of the lockdown in the middle of the year, Nagkaisa returned to launching mass actions. Nagkaisa had its Independence Day action at the Commission on Human Rights and joined the SONAgkaisa rally at the University of the Philippines. Protest motorcades were also launched at the DOLE, at Ayala Avenue in Makati, and at the ABS-CBN company headquarters.

By the latter half of 2020, Nagkaisa drafted a labor agenda called the “State of Labor and Its Agenda for Recovery” or SOLAR. The vision animating SOLAR was that labor protection was key to stimulating the economy. One of the key provisions of Nagkaisa’s labor agenda was the unemployment support and work assistance guarantee or USWAG. SOLAR went beyond a corporatist focus on workers’ demands as it connected this to an overall vision of radically reforming society on the backs of recovering from the crisis. A key plank of SOLAR was the call for a wealth tax and a war against the oligarchy. Early in 2021, amid a spike in food prices, Nagkaisa called for a P100 across-the-board wage hike to recover the lost purchasing power of wages.

Nagkaisa’s constituent organizations also undertook practical assistance for their members and base. Around May, SENTRO distributed ayuda to its community base while unions also gave assistance to its members. PM distributed cavans of rice to almost a thousand export processing zone workers in Mactan, Cavite, and Laguna. While the main purpose of the aid distribution was immediate relief to workers, it nonetheless promoted labor rights education. In the Mactan export zone, PM’s aid distribution stood in stark contrast to the meager assistance from companies and the inconsistent provision of aid from the DOLE. This directly led to a surge in membership in the Mactan Export Processing Zone Workers Association and the push for unionization in the largest apparel factories.

In summary, Nagkaisa has engaged in a variety of means to respond to the pandemic, from pressuring government on workers’ demands, influencing public opinion through use of social and mass media, and undertaking aid distribution to its base. While Nagkaisa’s efforts have had limited success in changing government policy, at the grassroots level, it has had a major impact in advancing workers’ organizing, education, and agency. – Rappler.com

Benjamin Velasco is Assistant Professor, UP Diliman School of Labor and Industrial Relations (SOLAIR) and Co-Convenor, Program on Alternative Development, UP Center for Integrative and Development Studies (UP CIDS AltDev). Opinions expressed here are of the author alone and do not reflect those of his affiliations.