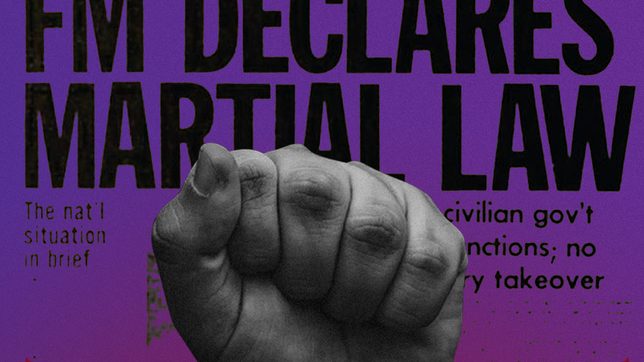 Facebook Twitter Copy URL
Copied
'The coming elections may just be...a last chance to prove that they could rebuild their movements the way their seniors did theirs'

Vice President Leni Robredo graduated from the UP School of Economics in 1986, just as everyone was celebrating the downfall of dictator Marcos. A few months after she finished, Francis “Kiko” Pangilinan was elected chair of the UP Student Council, leading a left-wing resurgence that returned power to the Sandigan ng mga Magaaral at Sambayanan (SAMASA, the students’ and peoples’ vanguard) after its stunning defeat to social democratic rival Nagkakaisang Tugon (United Response) headed by the late Commissioner of Human Rights Chito Gascon. Kiko would, a year later, become the first student member of UP’s Board of Regents.

If there was ever a group of UP activists who deserved the name “Martial Law babies,” it was this bunch. They were the legatees of two earlier generations of activists – communists and social-democrats – who began the arduous rebuilding of their respective movements a few months after Martial Law was declared.

Their elders achieved this feat at a fantastic speed: by 1975, they were able to build a network of supporters for the striking workers of La Tondeña Distillery. In 1976, they shamed a dictator trying to impress the graduating class through the first “lightning protest” on the Diliman campus, and by 1977, led thousands of students in a Metro Manila-wide boycott against tuition fee hikes. A few Muslim fellow activists managed to form the first multi-ethnic, multi-class coalition and, with arms from Libya and Malaysia, declared the independence of Mindanao and Sulu from Filipino colonialism and fought the dictator’s army in only the second conventional war the country has gone through. Social democrats broke bread with the MNLF and sent their Sandigan “army” to military training camps in Sabah.

They did all this at tremendous costs: most of the names embossed in the Bantayog ng Bayani’s Wall of Martyrs were activists of the late 1960s and the 1970s. Many died while expanding the communist party or honing their military skills as social-democratic chapters moved from reformist politics to an urban guerilla war. Thousands were incarcerated and tortured, and hundreds were forced into exile.

But build the movements they did. By the 1980s, the CPP was a nationwide presence with a 30,000 cadre and activist core, a 21,000-strong NPA operating in 45 guerrilla fronts, and a “mass base” of over 1 million. The social democrats’ growth slowed down after the MNLF closed its training camps in Sabah and its failed urban bombings of the late 1970s. But they now had a presence in sectarian schools and had their labor federation.

Political life for these Martial Law babies was a bed of roses. They did not worry about the network because the structure was already there. They knew where to go to further serve the people: in the rural areas, the NPA was there, while in the factories, the labor and urban poor federations were ready to welcome them. Confidence exuded amongst these babies, and it often took them in different, often contrary directions. Some became avid Maoist defenders, content with formulaic explanations and slogans, and angry when students did not respond. Others saw an opportunity to try new things, often to the dismay of their political officers.

Lean Alejandro was disciplined by his political officers when he relied on faculty and many left-wing renegades to win the student council election for Jose Alcantara. Then as USC chairman himself, he took students to the Mendiola bridge fronting Malacañang Palace – the first time this was done since 1972. His political officers thought it was “adventurism;” he saw it as an audacious way to tell the dictator his days were numbered.

It was amidst all these changes that Leni, Kiko, and Chito entered UP. SAMASA was already the power bloc, having defeated a coalition of conservative fraternities in all student elections. But Tugon would announce its presence after the social democrats gained tremendous political capital from the assassination of moderate and anti-communist ally Benigno Aquino Jr. In 1985, Gascon and Tugon did the impossible – seizing the student council from SAMASA.

But this was also a garden where the flowers were beginning to rot. Outside the UP campus, just a little after 1986, the communist movement was unraveling. The decision of its five-man politburo to boycott the snap elections (so much for internal democracy) resulted in fierce factional infighting, worsened by the massive bloody purges by the end of the decade. Only the timely coup of the CPP’s Great Leader saved what was left of the organization, but the Party was never the same after that.

The social democrats also broke up into warring cliques, with some joining the coalition of “independent leftists,” Bisig, others still committed to playing anti-state opposition, while others were seeking the fastest way to overcome the smallness of their political tendency (vis-à-vis the communist) by working inside the new regime. Work with Cory and influence policy.

The first two had a couple of years of good organizing. They soon after disappeared in the political scene, giving way to the election-minded Akbayan, where they now also hobnobbed with ex-communists, their former social democratic comrades, and budding politicos. Those who infiltrated the state to change it from within only achieved minor success: their thumbprints were absent in the most critical policies of the Aquino administration – the handling of the economy and the definitive resolution of land reform.

This was the setting in which these Martial Law babies entered their thirties. Many become embroiled in the factional infighting (lots of friendships ended and new fierce animosities born). Many left to look for jobs or leave the country. Still, some chose to continue working for the poor, this time through non-government organizations that steered clear of the ideological divide. Still, a few decided that working with the other side was better. The main motive was money, but some believed that a “Strong Republic” or a return to Marcosian mode of governing was an excellent way to achieve growth for a few kinks in the armor.

Their political maturity came at that nodal point where political success and political decline intertwined, where the highs of finally overthrowing the dictatorship were immediately dampened by their marginalization and infighting.

For the next three decades, these First Quarter Storm generation children fumbled their way through a political arena dominated by clans and mini-Marcoses, not knowing what the best course would be to resurrect radical and social democratic politics. Old Maoist tactics were revived given that the leaders of this generation lacked the ideological acuity of their elders (even today’s communist slogans come from the 1970s!), others doggedly pursued a reformist line. Nevertheless, democratic centralism and few opportunist moves (Satur Ocampo and Liza Masa locking arms with Bongbong under the patronage of Manny Villar; and of course, the Duterte bromance) ensured full communist representation in the House of Representatives, while similar tete-a-tete with politicos got Akbayan and the social democrats a place in the Senate and the executive when the Liberal Party won it.

Still, these “gains” were puny compared to the cacique restoration. And now, even their future is not assured as more Filipinos are swayed by the authoritarian crudeness of the mayor from Davao.

[OPINION] Realpolitik and what is left for the Left The coming elections may just be a watershed moment for the children of the Martial Law era, a last chance to prove that they could rebuild their movements the way their seniors did theirs, and a chance to show Filipinos that the visions of a better society that got them out of the classrooms of Diliman and Los Baños can still be achieved.

This time, there may be a reason to be optimistic: SAMASA and Tugon alumni are rallying around their classmates Leni and Kiko, and while the communists are still shopping around for reactionary allies, their leaders seem to temper their dislike for the Robredo-Pangilinan team by insisting that their only concern is defeating Marcos.

May 9, 2022 may just be that pivotal moment for these Martial Law babies to leave their imprint on Philippine political history, finally. – Rappler.com