[Newspoint] Between us and him 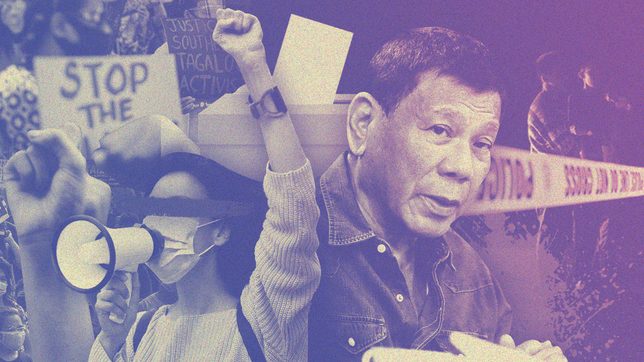 Facebook Twitter Copy URL
Copied
With Duterte as the case study, and with the pandemic providing a running close-to-home context for his regime’s incompetence, criminal negligence, and corruption, it should not be too difficult to show bad from good and whom not to vote for

The election in May may admit spoilers, but it is essentially a classic, two-sided fight, one between us and them – or, rather, between us and him. It compares with two historic conflicts, the one provoked by Marcos, the other, a world war no less, provoked by Hitler.

The comparison is actually inspired following Duterte’s own delusions: by his own proud avowals, Marcos and Hitler are his chief idols.

Never mind Duterte’s aberrations and other character flaws; they’re mere circumstantial factors and may even prove useful to him as excuses. It’s the crimes themselves – treason and other forms of national betrayal, repression, plunder, murder – along with the scale on which they occur and the impunity with which they are perpetrated under his regime, that make him worthy of a place in the same rogues’ gallery as his idols.

His more relevant installation, though, is as the one rogue the nation needs to be rid of, for its own survival. But again, while the alignment of forces for the election is easy to draw theoretically, in actuality it is not, because of the varying electoral agendas of the forces within the Duterte coalition.

For Duterte himself, the reason is plain enough, desperate, too: to escape accountability and jail. Which is why he’s going so far as to challenge the Constitution. He has declared himself open to a draft for vice president. His election as such, if approved by the courts, will allow him to go around the law that prohibits a president seeking reelection. In fact, it will put him first in the line of succession to the presidency. Indeed, that’s as good as being president again – if his scheme works. Not taking any chances with any other potential puppets, he is limiting his choice for president between daughter Sara and all-round longtime attendant, and now concurrently senator, Bong Go.

Consequently, the coalition is cracked. Allies whose own political ambitions have been curtailed under Duterte’s scheme are forced to seek reassurances or an outright draft from their parties or outside the coalition. But, lest it cost them what residual support they can hope to get from the coalition, they take care not to be seen as opposed to Duterte, only independent from him. If at all they criticize his regime, they make sure to distinguish between it and him. For instance, none of them would be caught taking him to task, not even vaguely. No one should be fooled: they haven’t the slightest credible claim to a platform of national cleansing, whose precise first requisite is to hold Duterte to account.

Hitler, of course, precluded that by shooting himself in the head. Marcos, on the other hand, had it rather easy – he escaped with his ill-gotten wealth and died in Hawaiian exile. But the ultimate joke on us yet is that he was buried a hero – by Duterte.

On the other hand, there would seem no reason to doubt the intentions of the anti-Duterte forces, although one never knows. Owing their strengths largely to Duterte’s failings but not too confident they can defeat him on their own, they are encouraged by the cracks in his coalition and have started prospecting for turncoats. The problem with turncoats is the habit itself.

Turncoatism is a hardy habit. It lives in the culture. Its great-granddaddy was collaborationism, which flourished in the colonial times and in the last war. Where collaborationists were shot elsewhere, here they were elected president; now they live in the history books, not only rehabilitated but celebrated.

The difference between the two types of betrayer lies in the taint of treason a collaborationist carries, for switching country allegiances, and a turncoat doesn’t, for switching mere party loyalties. But Duterte’s transcendent uniqueness covers both types. He not only switches parties but straddles a whole coalition of them. And in an age where wars of colonialism are supposed to be a thing of the past he still manages treason – by ceding a whole territorial sea to a foreign power.

Nothing beats going straight to the party-less electorate. For one thing, these commoner voters are immune to turncoatism, an affliction of the politically privileged. For another, having no pretentions, they should be open to being informed, educated, and enlightened, and persuaded. And, needless to say, they have the numbers.

Naturally, where fear-mongering and disinformation are an organized enterprise, truth and reason, for all their natural virtues, require a far greater effort to sow and grow than in a non-toxic environment. But with Duterte as the case study, and with the pandemic providing a running close-to-home context for his regime’s incompetence, criminal negligence, and corruption, it should not be too difficult to show bad from good and whom not to vote for. – Rappler.com