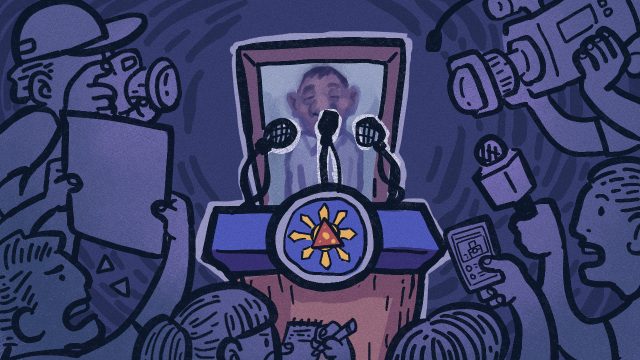 Facebook Twitter Copy URL
Copied
'No President, indeed, has been so inaccessible to the press, and to his own constituents by extension, as Duterte'

It being customary with him, when Rodrigo Duterte makes himself scarce, he is scarcely missed. But these days, even sectors of the nation more or less resigned to waiting until the end of his term, in June 2022, appear to have reached the limits of their tolerance of his unresponsive and high-handed presidency: they want him to show himself, in person, for proof, if not of life, of fitness to continue in the presidency.

The change in attitude was inspired by the announcement that he was going into “perpetual isolation,” and that got his spokesman into a tizzy: Harry Roque tried quickly to correct himself – he had meant “political,” not “perpetual,” isolation, he said.

But the issue is not so much with the word “perpetual” or “political” as with the word “isolation.” At this time of a deadly pandemic, surely any senior with a medical condition ought to isolate himself, if only for his own sake. Duterte is the precise type: obviously, at age 75, he is very senior, and also, evidently, very ill. But his particular case complicates things not just for himself but for the entire nation.

One condition alone has lingered long enough to possibly pose that kind of danger: he suffers from myasthenia gravis, an incurable and progressive disease that impairs the communication between nerves and muscles. It leads inexorably to incapacity.

And only today, August 25, he confessed to “nearing first-stage cancer” of the esophagus. He didn’t say how near, and I didn’t know pre-cancerous conditions also came in stages. Anyway, no amount of cavalier bravado can mitigate the sense of gravity the disease inspires or actually carries.

For far longer, Duterte also has been a psychological case, certified as “anti-social” and “narcissistic” in the 1990s, and, not having gone, ever, as far as is known, into any prescribed therapy, the aberration could only have deepened. His mockery of God, his idolatry of Hitler and Marcos, his submissiveness to China’s Xi, and his alignment with Russia’s Putin are textbook symptoms. The nation’s descent into authoritarianism is, on the other hand, an indisputable consequence.

His pronouncement, in reply to calls for him to come clean about his health and also, in the light of his self-isolation, about his whereabouts, has been typically sick: Rodrigo Duterte, says he, owes no one.

On that narcissistic note, Duterte upped and left us to our pandemic under a predominantly military administration. Now and then, a still picture or video of him, doctored to look current, is sent around to keep us fooled – and fooled we have allowed ourselves, indeed for too long.

To be sure, social media have been afire as never before with protest against, mockery of, and ill-wishing for him. It’s not for me to judge the fairness or propriety of the mockery and ill-wishing, but the default, the indulging, the tolerating, the timidity, the silence – all this simply has got to end. And, if there’s one institution on which falls the first duty to demand of the President the truth about his capability to govern, it is the press.

It would also seem the institution guilty of perhaps the most grievous default – allowing Duterte to upend the very tradition that defines in practical terms its relationship to the President. That tradition – “Meet the press” – is precisely intended as a running test of presidential capability.

But Duterte has decided to exempt himself from it since very early in his presidency. What he wants to say he now says without afterward, in keeping with the tradition, taking any questions from the press, and lately he has been doing his monologue only virtually.

He was at it again this morning, and late again, but this time with a plausible, if unadmitted, reason: a hard act to follow. The previous evening, Leni Robredo, the Vice President, whom he had been trying to marginalize but whose initiative he just could not suppress, had given a diagnosis of the national condition and, with it, prescriptions. In all of 20 minutes, she showed the difference between capable and inutile.

With a more or less full Cabinet on hand, Duterte still got no help. He and his choir gave their usual performance: promises and platitudes. And, being virtual, the performance suited them perfectly – they applauded themselves.

The press was excluded, too. Actually, it has long been marginalized, but, unlike Robredo, it does not seem to mind being complicit by its timidity.

Left to deal with presidential assistants themselves too afraid to try to explain their wooly-minded boss and risk being seen by him as presumptuous, the press always comes away with hardly anything. And, itself apparently intimidated, it only feels relieved to have hit – to put it in its own now convenient argot – “a blank wall” and not have to “stink bomb” Duterte out to get at the truth.

Thus, freedom is wasted on the press, and consequently the people’s right to know goes unserved. No President, indeed, has been so inaccessible to the press, and to his own constituents by extension, as Duterte. His current self-isolation, though, recalls a case somewhat comparable with that of his idol Marcos, who managed to keep his kidney transplants secret. Who really knows how far down into incapacity Duterte himself has been plunged?

What he himself is trying to hide may not be too hard to guess: old and sick, he is living in the time of a pandemic most vulnerably, and, despite his condition, he expressly wishes yet to rule as a dictator.

But, its business being truth, the press has to do better than guess; it has to ferret out the facts. And to be able to do that in this particularly severe environment it has to exercise its freedom courageously and aggressively.

This time the test should work both ways: for Duterte to be held to account and for the press to redeem itself. – Rappler.com