“Discipline” is the not-so-secret sauce in authoritarian appeal.  We’ve heard it from proponents of martial law and the war on drugs.  Discipline is what Filipinos lack, and discipline is what strongmen promise to enforce.  As for the liberal opposition, they must be excuse-makers who appeal to effete human rights principles, and lack appreciation for rules.  We need discipline!  But what is discipline, really?

It is very common in Filipino culture to equate discipline with harsh punishments.  Indeed, the two terms are often used synonymously, for example when some parents say that they are “disciplining the children” on occasions when they mete out punishments.  Rather tellingly, this is one of the reasons our legislation against domestic violence is so hard to enforce: many families still believe that it is necessary for discipline.

Yes, penalties are part of discipline, but true discipline is much more complex than that.  Harsher punishments do not always result in better discipline.  Psychologically speaking, to discipline someone means training or teaching them to have a certain pattern of behavior.  A consistent set of rewards and punishments are useful tools for this purpose.  Discipline is often enforced by external authorities and/or social pressure, but the highest form of discipline is thought to consist in people disciplining themselves.  In simple terms, it is about forming a set of desired habits.

[OPINION] How do you teach students discipline and honesty through a computer screen? 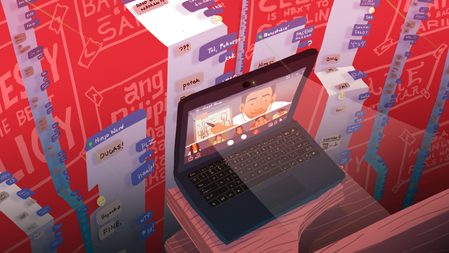 A system of rewards and punishments may sound crude, but it can evolve into a complex and effective system — assuming that the punishments and rewards come reliably.  A high-achieving child is rewarded with praise, a sense of accomplishment, and further opportunities.  If the child is motivated by these positive results, the parents should not have to turn to spanking, threats, or “stage parenting” in order to maintain motivation.  At the same time, the rewards should come consistently: the child should be praised accordingly for achievements.  If the rewards are suddenly cut off because, say, parents or teachers are in a bad mood, or express favoritism to another child, we can expect the child to lose motivation and discipline.  In other words, the people who are in charge of instilling discipline must themselves be disciplined.

Communication is also an important part of discipline.  To go further with the above example of children being encouraged towards high achievement, the children should understand why they are being punished or rewarded.  For example, they should know that they are being praised for working hard and improving, not because they are the cutest child in their class, or because they have famous parents.  If they are punished for cheating, they should know the implications of dishonesty, and understand that they will not be rewarded for high scores at any cost.  Punishment without rationality is little more than revenge, and does not lead to learning and improvement.

That said, beyond systems of rewards and punishments are dimensions of leadership.  Parents, teachers, bosses, and politicians instill discipline through support and role modeling as well.  They should be able to convince a confused or self-doubting person that grand projects of self-improvement are possible.  Whether we are reshaping a country or just trying to grow up, change is hard.  Guides and leaders should be ready to be very supportive during these processes.  Role modeling is essential because it is one aspect of consistency: a parent can hardly insist that a child be polite, and yet habitually lash out rudely in moments of stress.  Those who take responsibility for instilling discipline must first develop their own self-discipline.

[OPINION] Citizen-blaming: The discipline rhetoric is a trick

For better and for worse, we Filipinos have learned to model our states on our families.  After all, it’s in the Constitution that the family is the basic unit of society.  While this constitutional article has led to questionable policies like our continued ban on divorce, it is also a reminder that we can learn to build a better country by imagining our ideal family.

Laws and law enforcement agencies are put in place because we can’t expect everyone in a society to adopt identical sets of rules and enforce perfect self-discipline.  However, just as good parents use a wide range of tools to instill discipline in their children, a functioning democracy is not supposed to rely on fear and punishment to maintain order.

Authoritarianism tends to gain appeal when citizens lose trust in “regular” democratic processes — or perhaps never developed this trust in the first place.  Instead, they look to iron-fisted leaders to enforce discipline.  Supporters of authoritarianism also tend to lack trust in their fellow citizens, believing that they will only respond to violent and extreme measures.  Ironically, authoritarianism, especially that which relies on personalities and patronage ties, tends to lead to harsh systems that aren’t disciplined at all.  They are subject to the personal whims of leaders.  Systems of punishment become more about instilling fear or getting revenge, instead of enforcing true order.

[OPINION] The politics of fear Finally, true discipline, whether on the familial or the national level, needs inspiring goals.  Children will be motivated to work hard if they come to love learning and believe in a bright future, instead of just bringing home awards for their parents to show off.  Citizens are more likely to follow rules if they can understand the mechanism by which these build a better, more stable society — not just because some faraway authority “said so.”  But in both cases, leaders must listen to the people they are responsible for.  The parents must understand the child’s own dreams for the future, and politicians should offer up their ideas to the common tao for feedback.

The Philippines needs discipline.  As we head to the polls in May, let us think hard about what that word really means, and whom we can really trust to help us achieve it. – Rappler.com