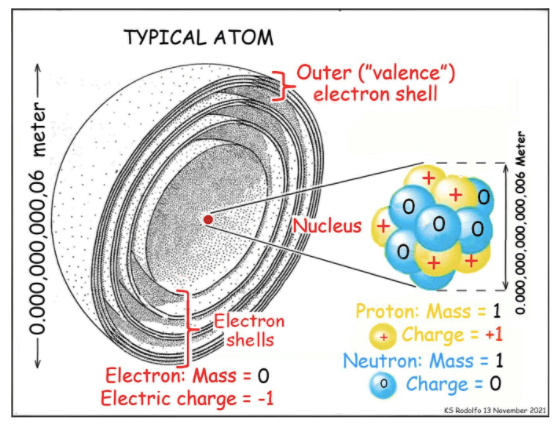 Facebook Twitter Copy URL
Copied
Here, we examine the nucleus more closely, to prepare us to study how BNPP would work, reactor accidents, the toxic vicinity of an operating reactor, and the nuclear waste that will be lethally radioactive for millennia

The following is the 21st in a series of excerpts from Kelvin Rodolfo’s ongoing book project “Tilting at the Monster of Morong: Forays Against the Bataan Nuclear Power Plant and Global Nuclear Energy.“

Our last foray introduced us to the atom, the clouds or “shells” of electrons that surround its nucleus, and how the outermost shell governs the garden-variety chemistry of everyday life. But then we described how small the nucleus is. Here, we examine the nucleus more closely, to prepare us to study how BNPP would work, reactor accidents, the toxic vicinity of an operating reactor, and the nuclear waste that will be lethally radioactive for millennia.

The nucleus is made of only two types of sub-atomic particles: protons and neutrons.

The proton and hydrogen

Let’s pay respect to the mighty proton, important in so many ways. Its name comes from the Greek proto, meaning “first,” because it makes up everything. There can be no smaller piece of actual material. “Pro” also helps us remember that it carries the smallest bit of positive electric charge, equal to but opposite to that of the electron.

Hydrogen is our very simplest elemental atom. Its nucleus is only a single proton, and so it has only one lone electron in orbit around it. Protons and hydrogen were truly “first” when the Universe came into being, the only matter that existed back then. All the other elements began to form only when stars, deep in their enormously hot and pressurized hearts, began to power themselves by fusing sets of four protons into helium nuclei. That is the same process of nuclear fusion that powers hydrogen bombs.

Just for the record, a proton weighs 1.627 octillionth of a kilogram. Forget that, and just call it an atomic mass unit (amu). Remember U235 and U238? Their atoms respectively weigh 235 and 238 amu.

We know the weight of a proton, but how big is it? It is so small that the idea of “size” is almost meaningless. Being so tiny, the methods to measure it are very difficult, and give different results. In 2019 its diameter was measured as one quadrillionth of a meter. That would work out to about 1/10,000 the size of a whole atom.

Far out of proportion to their vanishingly small size, protons have gigantic roles in our environment and existence.

Ions are simply independent atoms and molecules that have electric charge because they hold too many or too few electrons to balance the positive charge in their nuclei. Those electric charges make them chemically active, aggressively seeking ways to lose, gain, or share electrons by combining with other atoms.

When a hydrogen atom loses its lone electron and become a free proton with a positive charge, chemists call it a hydrogen ion, H+.  But hydrogen ions and protons are essentially the same things. Protons, as hydrogen ions, aggressively seek electrons to capture. They are the active ingredients of all common acids.

But the most fundamental role of neutrons is to make it possible for all atoms more complicated than hydrogen to exist.

In our drawing of the nucleus, the only electric charges in it are positive, provided by its protons. So what keeps the nucleus from flying apart? Aren’t like charges supposed to repel each other? That’s where neutrons come in.

A neutron weighs the same as a proton but has no electric charge, hence its name, from “neutral.” A “Strong Nuclear Force,” 137 times stronger than electromagnetism but operating only at very close range, bonds the protons and neutrons together into the nucleus.

All atomic nuclei with protons that are matched by equal numbers of shell electrons behave chemically the same way, and thus belong to the same element. But some elements have varieties with different numbers of neutrons, so their atomic weights are different, even though their atomic numbers and chemical behaviors are basically identical.

“Isotope” is Greek for “same place,” referring to the square in the periodic table of elements that all the isotopes of a single element share. For example, Oxygen (Element #8) has three natural isotopes:  O16, O17, and O18, with 8, 9 and 10 neutrons respectively. One isotope usually is much more abundant than the others; thus, O16 makes up 99.76% of all oxygen.

Artificial uranium isotopes with weights from 214 to 242 have been made in reactors. One of them is highly radioactive U233, the holy grail of the Thorium reactor cycle (see Foray 12).

Two other isotopes that will concern us greatly are Plutonium 239 and Plutonium 240, toxic waste products of nuclear power plants.

Even hydrogen, the simplest atom, has two heavier isotopes. The deuterium nucleus has one neutron in addition to a proton. It occurs naturally but is quite rare, only one of every 6,420 hydrogen atoms. Deuterium is not radioactive and behaves chemically just like regular hydrogen, but is twice as heavy. It is used to slow neutrons down in some nuclear reactors.

Tritium is an artificial isotope, produced in nuclear reactors. It is three times as heavy as common hydrogen because its nucleus has two neutrons. It is a dangerous pollutant because it is highly radioactive.

Our first look at radioactivity

Neutrons can’t exist alone for very long. In an unstable nucleus like that of tritium, if a neutron strays away even a little, the Strong Nuclear Force no longer operates. The neutron decays: An electron shoots out of it at high speed, leaving a proton behind. That is a radioactive event. The fleeing high-speed electron was named a “beta particle” before people knew what it really was.

Simple arithmetic: a proton plus an electron equals a neutron. But don’t think of a neutron as a proton pregnant with an electron. Neutrons have as much fundamental identity as protons do.

So. Atomic nuclei with either too few or too many neutrons, including uranium isotopes U235 and U238, are unstable and decay radioactively.

Our next foray examines radioactivity, a closer look at beta particles, and an introduction to alpha and gamma radiation as well. – Rappler.com