The late professor Aileen Baviera made two important observations about Philippine foreign policy. First, the country’s foreign policy direction is similar to a pendulum because it swings wildly to the other side every six years. Second, while the nation has generally accepted the president’s role as the chief architect of foreign policy, the office holder may not necessarily be up to the task. These two reflections by one of the country’s most important and influential foreign policy experts will soon be tested again.

In every national election, the Philippines is given an opportunity to refocus its priorities and recalibrate strategies geared towards achieving its national goals. Ten presidential candidates are vying to seize this opportunity. The COVID-19 pandemic has glaringly illuminated many of the country’s ills including our inadequate health infrastructure, and poor governance and systemic corruption. All these, notwithstanding the consequences of the lockdowns on jobs and livelihoods, education, and ultimately, our nation’s morale, will be some of the most pressing concerns of the newly elected President of the Philippine Republic come June 30, 2022.

When scrutinizing the candidates’ platforms, domestic concerns commonly take center stage. Beyond headline-grabbing issues like the South China Sea or relations with China and the United States, foreign policy tends to take a back seat in agenda-setting. Many will agree that this is a consequence of the country’s largely reactive – rather than purposeful and tactical – strategic foreign relations. Discontinuity and the absence of a long-term vision due to constantly changing administrations, the lack of awareness and appreciation for the linkages between internal and external issues, and domestic opinions and contestations influencing leadership preferences are some of the structural impediments to a robust strategic external relations agenda. It is therefore imperative that regardless of who the next Chief Executive is elected, the administration’s exercise of agenda-building entails the construct of a national identity that reflects the synergies in the Philippines’ national interests. This essentially involves making long-term, strategic policy choices that integrate our inextricably linked national security and foreign policy objectives. Foremost is the need to redefine national security in a manner that places equal primacy on addressing non-traditional security threats. These should tackle, among others, food, energy and economic security, climate change, cybersecurity, and core democratic values such as liberty and human rights. Reframing our national security interests then should be drawn along the three pillars of foreign policy: political security, economic security, and safety of Filipinos abroad. These are vital to preserving our holistic security demands and aspirations beyond the defense of Philippine sovereignty and territorial integrity, which comprise the core of our security exigencies.

Towards security in the ‘new normal’

Human rights must be at the core of national security. The intricacies of the pandemic have shown the interconnections between national security, health security, environment, and human rights. Creative energies imposed on the populace should instead be unleashed on the unseen enemy by measure of preparing for future pandemics, i.e., bolstering health infrastructures, strengthening populace-friendly health protocols and policies, and calls for vaccine equity in the international community.

The Philippines must pursue the revival of a more equal and grounded Philippines-United States relations. While Manila and Washington’s bilateral relations have remained resolute in the face of disruptive circumstances owing to resilient and longstanding institutions and ties, both countries must seek a rejuvenation of bilateral relations. This should be rooted in parity in access, strategy, and assets. Similarly, a renewal of ties denotes a renewal of reciprocal commitment and responsibilities.

The Philippines must acknowledge that it cannot act alone. As the region continuously evolves, our independent foreign policy should remain steadfast while maintaining flexibility to meet its strategic goals. Forging ties with emerging players and strengthening ties within the region, including with Japan, South Korea, Australia, the United Kingdom, and the EU are sensible ways to achieve this. Multilateralism, international law, and diplomacy must prevail. Conversely, our strategic relations with the international community must not be pursued at the expense of bungling our relations with China. Engaging Beijing must remain principled and anchored on international law. This can be understood as cooperation with China without costing the Filipinos the Arbitration Award. And regardless of how some national observers and policymakers view ASEAN, strengthening our interconnectedness with our immediate geographical neighbors remains to be an indispensable aspect of our foreign relations.

On debate stage, Robredo and Lacson emerge as foreign policy-ready The State’s natural resources in land, air, and sea are under constant threat from man-made machinations, whether by pollution and climate change or by foreign aggression. The Philippines is susceptible to worsening extreme weather conditions and has experienced some of the worst typhoons in the last decade. Manila must strongly declare these deteriorating conditions before the international community. The country’s and other coastal states’ survival rests on the world’s urgency and resoluteness in developing a robust, reliable, and equitable climate policy.

The Philippines must also broaden its participation in the global economy. It can and must drive post-pandemic economic recovery initiatives among ASEAN states and partner dialogues like the US, the EU, China, and Japan. The Philippines will benefit from expanded trade relations with the world. The two promising major trade agreements, the Regional Comprehensive Economic Partnership (RCEP) and the Comprehensive and Progressive Agreement for Trans-Pacific Partnership (CPTPP), manifest great potential in attaining economic prosperity and unleashing Filipino potential. However, efforts in securing the two multilateral trades have been slow, and should be prioritized.

A reliable member of the international community

The Philippines must reinvigorate its standing as a member of the international community. Regaining our footing demands refocusing our efforts towards upholding human rights, reinforcing compliance to international law and embedding these values in our rubric. Effectively, we must rejoin our membership to the Rome Statute to reaffirm our commitment to preserving human rights and seeking accountability for culpable individuals and institutions. Tangentially, this will contribute to consolidating support for our legal case in the West Philippine Sea, vis-a-vis the UN Convention on the Law of the Sea (UNCLOS), as it demonstrates consistency with our pursuit of a rules-based international order.

The Department of Foreign Affairs (DFA) must continuously be enhanced and professionalized. All diplomatic communications, especially in areas with key strategic interests, must be centralized and fall within the exclusive purview of DFA. 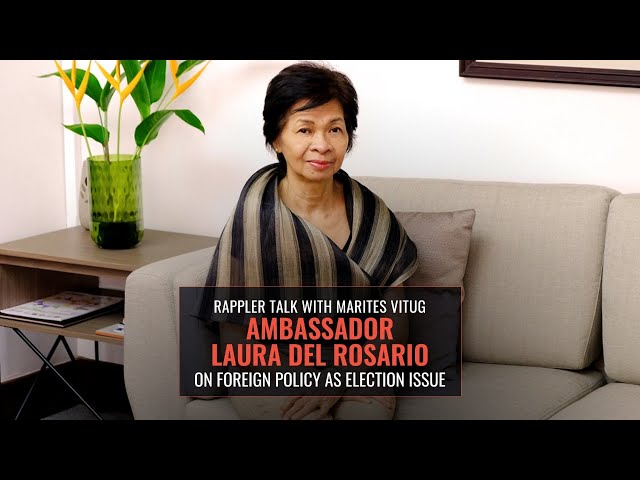 National security and defense in the coming years

Planning for the immediate-, medium-, and long-term goals is the first critical step for the next administration. The establishment of a consistent national security policy, one that is centralized into a single comprehensive document should be an immediate goal. The government must also continue the modernization of the Armed Forces of the Philippines (AFP), the Philippine National Police (PNP), and other enforcement agencies. Calculating regional security developments, and augmenting security dialogues with neighboring countries should not lag behind. Manila’s intelligence community will need to intensify its engagement with regional counterparts as challenges shift rapidly.

In the medium-term, the next administration will have to bolster its support to the Philippines’ public and private institutions to counter foreign influence activities. It must inculcate long-term strategizing and planning, with the AFP’s modernization program as a focal point. As it enters its third and final horizon in 2023 (until 2028), the new government must principally address the overlapping mandates between forces and enforcement agencies that have contributed to response delays. Reforms may begin with re-conditioning forces to govern the domains originally envisioned for them (i.e. the AFP towards external security threats and the PNP towards internal security threats).

The AFP’s ballooning pension system is another serious crisis requiring creative solutions to unearth alternative revenue streams that will decongest the national defense budget. Local industries must step up in modernization for future defense posturing. Stimulating private investment in the development of the military industry will help fuel economic growth through an increase in capacity utilization, jobs generation, and a boost in profits. Without the steel, mineral, shipbuilding, research, and development industries, the Philippines cannot defend itself with its own weapons and assets and will continue to be beholden to foreign influence. While cooperation and diplomacy are important navigating tools in the conduct of foreign policy and national defense, these should be balanced by self-reliant defense systems in the battle for survival in a complex international system. – Rappler.com

The original version of this article was first published by FACTS, a non-stock, non-profit organization that provides and hosts expert analysis on foreign and public policies.

Peaches Vergara is currently the Project Manager for Waypoints, a civil maritime security reform project that Amador Research Services (ARS) is engaged in. She earned her MA in International Security from the University of Sydney and was a CT Program Officer and Political Research Officer in the Australian Embassy.

Deryk Baladjay is currently Research Manager at Amador Research Services. He is also a Young Leader at Pacific Forum.