Facebook Twitter Copy URL
Copied
Cory and the Aquino family became the personification of a country oppressed, and the dignity and courage they displayed became a mirror of what we could do with courage, faith, and unity

I rewrite this article every few years, the original one written a decade ago in 2013 on the 30th anniversary of Ninoy Aquino’s assassination. The original article was based on entries in my personal diary from August to September 1983. One day, I hope to declare victory over fascism, injustice, inequality, and all things that prevent this country from being a good place. When that happens, we will still remember Ninoy Aquino as a symbol, yes, but not a reminder of how little progress has been made since he was killed.

From grief to resistance

We remember August 21, 1983. We remember the days following Ninoy Aquino’s murder at the airport: the long lines first in the Aquino residence, later in Sto. Domingo Church; the dignity of Cory, the wife, and Doña Aurora, the mother; the dictator, pale and shaken, trying to pacify an angry people; above all, the funeral march 10 days after the assassination.

During the press conference upon her arrival in Manila on August 24, three days after her husband was killed, Cory was defiant: “Ninoy did not die in vain. He was right about coming back here. God will be the one to give me justice; He alone knows the truth; He alone will give me justice.”

Fifteen years later, in a speech during an August 21 commemoration, Cory recalled how she and her family was surprised upon their return, “What happened to us after Ninoy’s death was completely unexpected.” She said it was a surprise for her family to see on the night of their arrival the crowds that had lined up outside their house. “And to think it was even raining that night,” she added.

Cory described people lining up MacArthur highway from Tarlac (when Ninoy’s body was brought there) to Pampanga to Bulacan and then witnessing the sea of humanity around the Bonifacio monument: “I knew that a great change was taking place…. It took us more than 10 hours from Tarlac to Santo Domingo, because eager crowds would stop us, as they wanted to touch the hearse carrying Ninoy’s body. And as you probably know, it took us 11 hours to reach Manila Memorial Park from Santo Domingo Church.”

I joined that funeral march, walking with Dr Leovino Garcia, my mentor and chairman at the Philosophy Department of the Ateneo de Manila, after attending the funeral mass at 9 am officiated by the late Cardinal Jaime Sin. We walked from Santo Domingo to Roxas Boulevard for 8 hours as the funeral hearse slowly wound its way to España, Quiapo (the crowds there were the thickest), and Luneta. It was people from all walks of life: poor and rich, men, women, and children, more than 2 million of them. It would go on for another three hours, arriving only at 9 pm in Manila Memorial Park in Parañaque.

Midway to Luneta from Santo Domingo, it rained. Hard. Leo and I were soaked, wet from shoes up. But this did not make us run for cover. Nor did it scare or drive people away. The harder it rained, the bigger the multitudes grew. 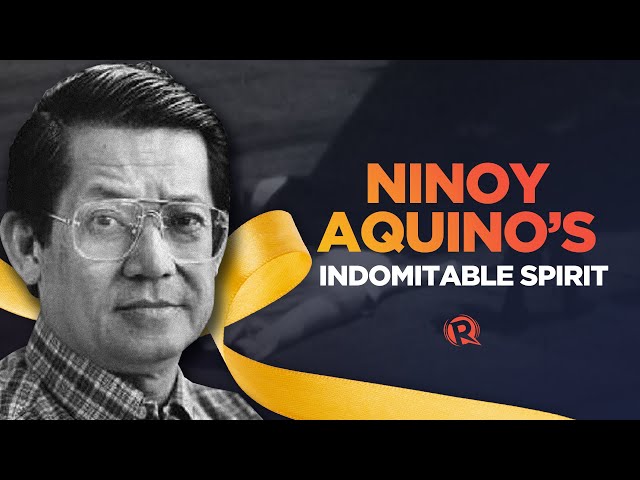 It felt like the rain was sent by God who cried with us as we mourned the death of a hero. People were singing in the rain “Bayan Ko” and other hymns of struggle. We were all chanting: “Tama na! Sobra na! Palitan na!” We shouted to Ninoy and his family and to each other, “Hindi ka nagiisa!”

When we got to Roxas Boulevard, the rain stopped and some even imagined seeing a rainbow (or it could have been the colors of the majestic Manila Bay sunset). That was a good omen, I thought.

Cory and the Aquino family became the personification of a country oppressed, and the dignity and courage they displayed became a mirror of what we could do with courage, faith, and unity. The death of her son President Noynoy Aquino recently confirmed this legacy of public service.

We need this again today as darkness covers the land because of a coronavirus pandemic coinciding with a terrible authoritarianism, both virulent diseases which kills. Both have gotten worse with the most corrupt government ever and with a President now potentially going to be charged in the International Criminal Court.

August is a sad month for the nation. Cory also died during this month, on August 1, 2009. On August 27, Senator Leila de Lima would have spent her fifth birthday unjustly detained. Last year, two great Filipinos, human rights and peace workers – Randy Echanis and Zara Alvarez – were killed by evil men who want the country and its poor permanently oppressed. A great artist Parts Bagani might have been murdered by state forces.

And yes, many good Filipinos continue to die from COVID-19, deaths which could have been prevented by a competent government.

I echo Vice President Leni Robredo’s words last year about the significance of August 21: “In Ninoy’s death, we began to realize how we are all bound together – even more tightly during times of oppression, suffering, and crisis…. In this realization, we found solidarity; we found the strength to take the first steps towards a freer, fairer, more humane society; we found hope, and the courage to stake our lives on that hope, just as he did.”

I welcome the rains of August. I pray that it would wash away the evil in the hearts of men, comfort and heal the grieving and suffering, and make this nation kind and happy again. The rainbow of liberation always follows the rain. – Rappler.com