Like Jose Rizal and Andres Bonifacio, Rodrigo Duterte and Ferdinand Marcos Jr. never completed the Reserve Officers Training Course (ROTC), now being extolled as a critical program to cultivate among the Filipino youth the values exemplified by pre-eminent national heroes.  There was no such course in the generation of Rizal and Bonifacio, but it was prescribed as a requirement to graduate from college for students in the time of Duterte and Marcos Jr. until 2002.

Duterte believes it would instill “perseverance, discipline, excellence, leadership, loyalty, and patriotism” among the young Filipinos and “invigorate their sense of nationalism and patriotism necessary in defending the State and further promote their vital role in nation-building.” In his first SONA, Marcos Jr. brings back ROTC to “motivate, train, organize, and mobilize the students for national defense preparedness, including disaster preparedness and capacity building for risk-related situations.” Both presidents now want mandatory ROTC restored for the same age cohort (16-18 years) of Filipinos.

Marcos Jr. never completed a college degree in the Philippines or in any country where ROTC was a compulsory subject. Duterte got his degree from Lyceum University but evaded the ROTC requirement.  At a forum in Davao that included diplomats, Duterte described how, for P1,500, he bribed a tuberculosis patient in San Lazaro Hospital to take an X-ray test under his name and submitted the result to the school as proof that he was not subject to the ROTC obligation.

Drilling on the dissonance between the rhetorical praise for ROTC and the effort taken to avoid it would be a waste of time.  First, Duterte bullet-proofed himself against public shaming by cheerfully and proactively confessing to his moral weaknesses. Politicians also seem to be less sensitive to public shaming, when able to deploy social media trolls in their defense.  But, secondly, beyond the character or motivations of their advocates, the issue of compulsory ROTC deserves to be decided on its merits.

At a time of global geopolitical tension and a hot war in Ukraine, there are legitimate reasons for a mandatory ROTC program.  The advocates in the country include legislators, bureaucrats, and over 50% of a survey commissioned by Sen. Gatchalian.  The apparent consensus prompts some questions.  Do the advocates agree on the primary objective that ROTC should accomplish?  Surely, the goal must shape the conceptual design of the program and the mechanics of its implementation. 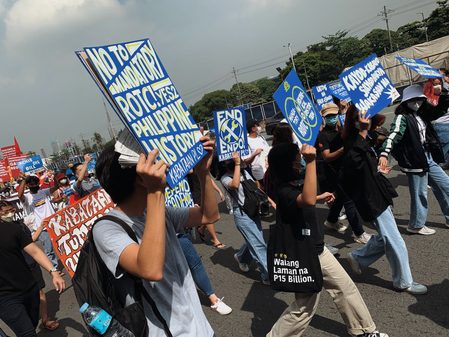 Take DepEd, which will need to help the DND to oversee program.  What does it want mandatory ROTC to accomplish?  The usual responses often include fostering among the youth love of country, the spirit of patriotism, and the willingness to meet their responsibilities as citizens.  One might argue for an alternative approach that immerses students at an early age in narratives that make real to them their connections to the land and the people whose destiny they share.  Educators have been calling for strengthening the courses in history to achieve through civic education at an earlier age what ROTC would try to do through military training at age 16.

Our grandchildren grew up and were educated in Singapore.  Although not Singaporean citizens, their excitement, at ages six or seven, as the August 9 independence day approached was visible and loud.  Preparing to celebrate “Singapore’s birthday,” they would bring their books to show us the little dot that was Singapore on the map and sing the national anthem.

But, granting that DepEd is better placed to pursue ROTC civic objectives, is this the task that should command its attention at this time?  DepEd does need to invest in reinforcing its ongoing civic education component and make improvements as best it can, just as the crew must continue sailing a boat that is shipping water, though it requires bailing to remain afloat.  Does another compulsory course help its decongestion program when already facing more urgent, basic tasks? On top of preparations for resuming face-to-face instruction, DepEd must worry about addressing the “learning poverty” crisis that World Bank has just flagged.  Children cannot appreciate civic education lessons if they are unable to read the texts that teach them. The DND/AFP support for mandatory ROTC triggers some knee-jerk reactions.  But even at the peak of the revulsion against ROTC in 2001, with the killing of Mark Welson Chua for blowing the whistle on corruption in the University of Santo Tomas ROTC organization, only a minority opposed the program on ideological grounds as inherently dangerous in promoting a fascist mindset.  The universities that had pressed for ROTC reform were calling for its proper implementation, precisely to prevent the kind of corruption, like paying for passing ROTC grades, that led to Chua’s murder.

That said, DND must still clarify what it wants out of the ROTC, which it could have and can still pursue under NSTP.  With the numbers enrolled in mandatory ROTC, DND could not deploy enough officers to sustain effective leadership of the program at the school level.  A revolving door replacement of ROTC commandants on an almost semestral basis made it difficult to enforce accountability for program performance.  A smaller cohort of trainees, presumably less resistant to the voluntary NSTP/ROTC program, should have been more manageable.

A recent review suggested that the NSTP/ROTC component graduated enough trainees to meet the required First Category Reserves level of 1% of the population.  Making ROTC mandatory expands the demand on AFP resources for the training of raw recruits to a number not critical to its mission.  DND faces arguably more urgent, basic issues.  Congress has long delayed resolving, for instance, the issue of retirement pension for DND/AFP, which is escalating to unsustainable proportions.  The most critical threat to the country is not internal communist insurgency but its internationally recognized sovereign rights in the South China Sea, to which its modernization program is key.

Expanding the ROTC is a legitimate objective.  But, like DepEd, DND must determine the trade-offs and mobilize resources from the national government for its priorities.  Personnel quantity or quality?  Manpower or modernization? – Rappler.com